Opposing Views for Withdrawal of Approval of Preterm Drug 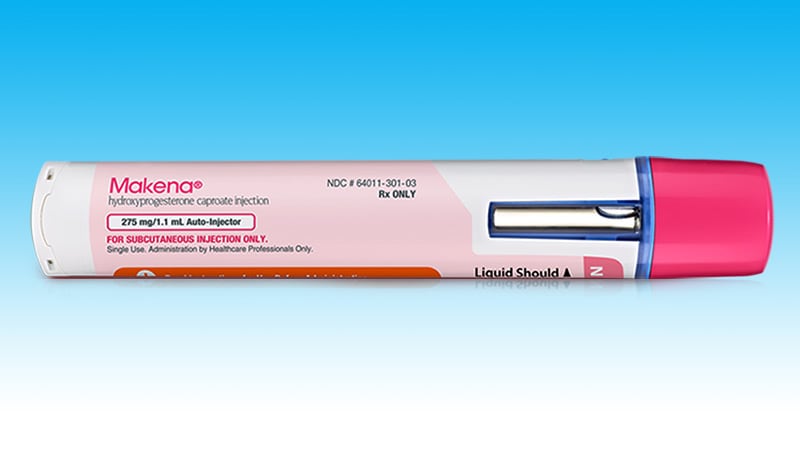 The Oct. 5, 2020 move by the Food and Drug Administration’s Center for Drug Evaluation and Research (CDER) suggesting the withdrawal of the approval of Makena incited some opposition.

The approval was based on findings from a randomized, placebo-controlled trial that demonstrated a 34% relative risk reduction in births before 37 weeks – from 55% in the placebo arm to 36% in the 17OHP-treated arm.

The trial was not designed to measure neonatal outcomes, with the surrogate outcome of recurrent preterm birth being determined as “reasonably likely” to predict benefit to the neonate.

Subsequently, results of the required postapproval confirmatory PROLONG trial produced conflicting results, failing to show a benefit of 17OHP on either preterm birth or neonatal outcome, which prompted the proposed withdrawal of the drug’s approval.

The CDER advisory committee agreed unanimously that the PROLONG trial did not support the clinical benefit of 17OHP, but the committee was not unanimous in deciding what to do. Of the 16 members, 9 voted to withdraw the drug’s approval, while seven voted to retain it and require another confirmatory trial.

When CDER recommends withdrawal, the company can request a public hearing, which it has done. The FDA commissioner will recommend whether to grant this request.

In the meantime, the New England Journal of Medicine has published opposing views on withdrawal of FDA approval of 170HP: one from a group of three doctors who are against it and the other from the CDER.

Arguments From the Opposing Views

“We sympathize with women who are at risk for recurrent preterm birth that could result in death or significant lifelong health effects in neonates, but retaining on the market a drug not shown to be effective for this use does not protect or promote their health,” wrote Christina Chang, MD, MPH and associates from CDER.

On the other hand, “the widespread use of 17OHP after accelerated approval has not uncovered important safety signals,” countered Michael F. Greene, MD, from Massachusetts General Hospital, Boston; David Harrington, PhD, from the Harvard T. Chan School of Public Health, Boston; and Mark A. Klebanoff, MD, MPH, who was coauthor on the original preapproval study and is with Nationwide Children’s Hospital, the Ohio State University College of Medicine, and Ohio State University College of Public Health, all in Columbus. “Withdrawal of the approval for 17OHP, as imperfect as it may be, will leave a very vulnerable demographic group of U.S. women at high risk for this complication of pregnancy with absolutely no available therapeutic option.”

While both the preapproval study and postapproval PROLONG trial had the same enrollment criteria – namely women with a singleton pregnancy and previous singleton spontaneous preterm birth – all parties acknowledged that the studies ended up with very different cohorts. Approval of the drug in the United States made it difficult to recruit U.S. participants for the second trial “because of a lack of equipoise perceived by health care providers and patients,” noted Greene and associates, resulting in 75% of the PROLONG study’s cohort coming from Europe. This meant that 59% of those in the first study were non-Hispanic black compared with just 6.6% in the PROLONG study, a difference that is important because of the increased risk of preterm birth in Black women.

“Black women are generally underrepresented in U.S. clinical trials, and they are clearly underrepresented in the PROLONG study,” noted Greene and colleagues, adding that “the total number of qualifying composite neonatal outcome events among Blacks or African Americans in the entire PROLONG study population of 1,700 participants was 9 (6 of 69 in the 17OHP group and 3 of 40 in the placebo group). This is not a robust database from which to conclude that there is no effect in Black women.”

But, Chang and the CDER group argued, while the first study showed 17OHP “reduced the risk of recurrent preterm birth in both Black and non-Black participants, the lack of even a trend toward efficacy among either Black or non-Black women in [the PROLONG study] argues that the smaller proportion of Black women [in the PROLONG study] does not explain the lack of efficacy.”

In addition to race, there were other risk factors for preterm birth, such as tobacco, alcohol, and street drug use; marital status; and age that differed between the two study cohorts. Even after subcategorizing PROLONG trial participants into higher or lower risk for preterm birth based on these risk factors, Chang and associates still found no evidence of benefit to 17OHP treatment in any risk group.

Withdrawing approval of 17OHP for a recurrent preterm indication would still allow off-label prescribing, but would most likely end insurance coverage and eventually manufacturing of the drug, noted Greene and associates.

“When the majority of a population achieves little benefit from a drug, but a minority demographic group at greatest risk for a serious medical problem appears to obtain significant benefit, any decision that will ultimately make it impossible to obtain the drug should be undertaken cautiously,” they warned. “This issue is particularly pressing when that minority group may be the least able to find and financially afford work-arounds to obtain the needed medication in our complex medical system that has a history of failing to serve them well.”

Chang and associates reported they had no relevant financial disclosures. Greene and associates reported that they had no relevant conflicts of interest or financial disclosures. Greene reported he is employed by the New England Journal of Medicine as associate editor. Harrington reported being employed by the journal as statistical consultant. Klebanoff reported he was an author of the original article about 17OHP published in the journal and referenced in this article.