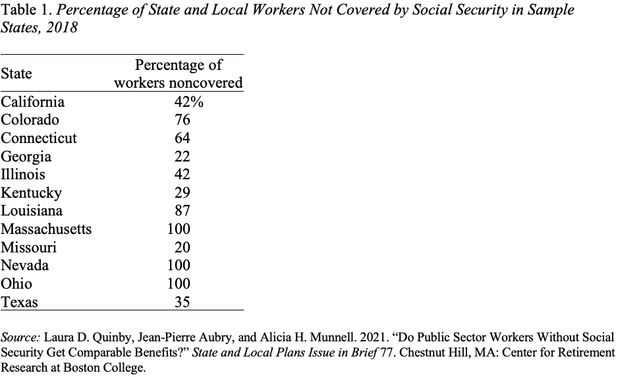 About one-quarter of state and local government employees — approximately 6.5 million workers — are not covered by Social Security on their current job. These workers are concentrated in 12 states (see Table 1 below).

To remain outside of Social Security, federal law requires that these employees be covered by an employer pension of sufficient generosity. Since many public pensions have grown less generous in recent years and a few plans could exhaust their assets, the question is whether state and local plans currently satisfy the federal standards. A recent study examined this question in three steps.

The first step determined whether the retirement plans for noncovered state and local employees satisfy the “letter of the law.” Public employees are permitted to remain outside of Social Security if their employer plan provides a member with a benefit for life of equal value to the Primary Insurance Amount that members would have received had they participated in Social Security. To help public plans determine whether they are in compliance, the government has established Safe Harbor provisions. Do the plans meet these “Safe Harbor” parameters, and do these parameters provide income equivalent to Social Security at age 67? The conclusions are that all plans satisfy the Safe Harbor provisions and that participation in a Safe Harbor plan produces about the same level of benefits at age 67 as Social Security.

Even if the plans meet these requirements, noncovered state and local employees still may not receive Social Security-equivalent resources because they face long vesting periods and may not get full cost-of-living adjustments (COLAs) — albeit, they can claim full benefits earlier than under Social Security.

The final step involves addressing the additional complication caused by low funded ratios and the possibility that a few state and local pension plans may exhaust their assets. Since legal experts generally agree that, once trust funds are depleted, benefit payments become dependent on the goodwill of the government, the likelihood of trust fund exhaustion is an important metric of benefit generosity. The authors estimated that a few plans could exhaust their trust fund assets by the mid-2030s. Clearly, workers in these plans may not have Social Security-equivalent benefits.

In short, while all plans satisfy the letter of the law, 43% of plans fail to produce equivalent lifetime benefits for a significant minority of new hires, and a few could exhaust their trust funds within about 10 to 15 years, putting beneficiaries at risk. The most straightforward policy option is to enroll all state and local employees in Social Security — a common feature in many packages of proposed changes to improve Social Security’s finances.

Moderna vs. Pfizer: Both Knockouts, but One Se...

Everything Microsoft announced at its 2021 Sur...