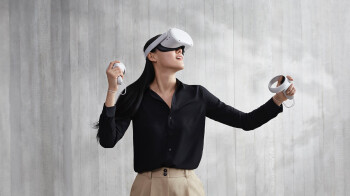 The Facebook-owned Oculus Quest 2—one of the leading headsets in the world of virtual reality—has been enjoying gargantuan sales this year, with Facebook reporting that this particular model “outsold not just its predecessor, but all of its predecessors combined” in 2021. However, that figure is about to take a hit as all sales of the Oculus Quest 2 have been put on hold for a few weeks due to a safety concern.

The issue stems from a number of customers reporting they suffered cases of skin irritation from the front-lined foam where the headset rests on your face.

Reportedly, only 0.01% of customers have been experiencing such irritation, with even these cases being very mild in their vast majority. However, a select few of them have been reported as quite severe, and for this reason Facebook has chosen to pull the entire product and prevent further cases and perhaps a lawsuit in the future.

This didn’t come out of the blue, however. The Oculus Quest 2 VR headset has been in the stores since last October, and people have been speaking up every so often for a very long time, posting pictures of their reddened skin on social media such as Reddit and Facebook.

In April, Facebook suddenly addressed the issue, claiming they looked into the matter and found no real concern:
“After conducting a comprehensive investigation into this issue, we did not find any contamination or unexpected substances in our manufacturing process. We identified a few trace substances that are normally present in the manufacturing process which could contribute to skin discomfort, and while these were already at levels below the industry standard, out of an abundance of caution we changed our process to reduce them even further. We’ve confirmed with expert dermatologists and toxicologists that these levels are considered extremely low. While this issue has only been reported by a very small percentage of Quest 2 users, with these changes, we believe that users are even less likely to experience irritation resulting from any substances in the foam facial interface. We encourage any customer who experiences irritation from using Quest 2 to contact Oculus Support for a facial interface replacement.”Somehow, this announcement didn’t fix the very real problem (surprise, surprise!) and many users continued to experience the blistering that whatever chemical was used in the foam seemed to be causing. Finally, a few days ago, Facebook apparently finally decided to face the problem and fix it for users once and for all.
The company has paused sales of the Oculus Quest 2 on a global level, and the hold will last for a full month—resuming on August 24—while Facebook fits every single Quest 2 box around the world with a protective silicone cover that goes over the problematic foam (which, by the way, is also removable).

Today, we’re introducing a new silicone cover for all customers globally, including as part of a joint voluntary recall of the Quest 2 removable foam facial interface with the U.S. Consumer Product Safety Commission (CPSC) and Health Canada. In addition, we’ve been communicating with global regulators and are taking the extra step of temporarily pausing sales of Quest 2 globally while we work to include the new silicone covers in all Quest 2 packages. The new silicone cover fits over the Quest 2 removable foam facial interface and starting on August 24, all Quest 2 headsets will come with a silicone cover included in every box. For more information, please visit the Oculus blog.

Anybody who already owns the Oculus Quest 2 and wishes to get one of the protective silicone covers for free, can simply contact the company by following these instructions published on the official page.