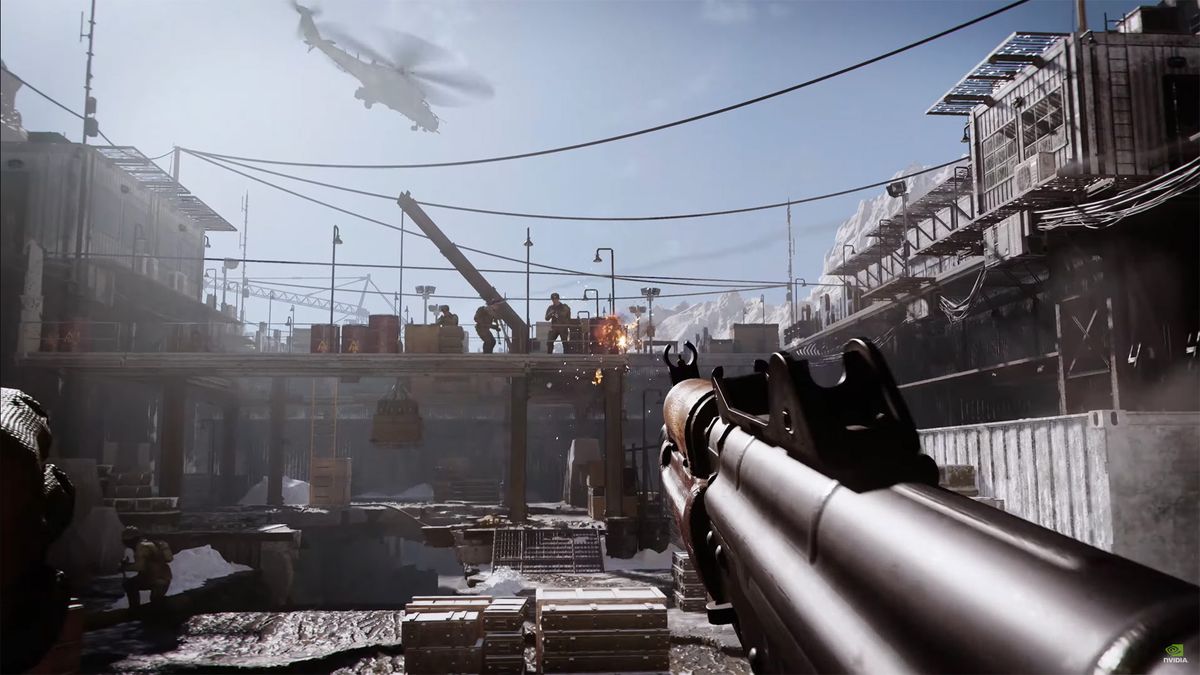 Nvidia has announced a quartet of new games to get the DLSS treatment, with claimed performance boosts of as much as a frankly bonkers 120 percent at 4K. Titles include Call of Duty: Black Ops – Cold War, War Thunder, Enlisted and Ready Or Not. Meanwhile, Nvidia has also announced a new ‘RTX’ custom map for Fortnite, complete with several flavours of ray-traced visuals.

DLSS is, of course, Nvidia’s performance boosting and image prettifying technology. In a perfectly-rendered nutshell, DLSS allows games to run at lower and less demanding resolutions, but be scaled up to mimic the visual fidelity of higher resolutions courtesy of clever AI algorithms.

The first generation of this tech had a tendency to be a bit muddy, but the latest DLSS implementations have been seriously impressive, not just for performance but for fidelity too.

Of the four new games to benefit from DLSS, it’s the Triple-A blockbuster that is Call of Duty: Black Ops – Cold War that will turn most heads. Nvidia reckons that performance jumps by up to 85 percent at 4K with DLSS enabled on GeForce RTX graphics cards.

In practice, for instance, that means performance on an RTX 3070 jumps from 45 frames per second to 85 frames per second at 4K in ultra quality mode with ray tracing enabled. Along with DLSS, supported features in Call of Duty: Black Ops Cold War include DXR ray tracing, Reflex, Ansel and Highlights.

But it’s actually tense tactical shooter Ready Or Not that gets the biggest performance boost, with Nvidia claiming a crazy 120 percent uptick at 4K. For the 3070, that means a jump from  a marginally playable 29.7fps at 4K Max with ray tracing to a much more appealing 71.4fps.

Meanwhile, Fortnite is getting a new custom ray-tracing enabled map called ‘RTX Deathrun’. Due to be released by Epic tomorrow (November 18th), the new map can be accessed in Fortnite’s creative mode with map code 2623-0157-9251.

According to Nvidia, “throughout this deathrun, players will experience different ray-traced features. The first environment, the Shattered Reality, is brought to life through ray-traced reflections. In the Mystic Cave, lighting effects are more realistic than ever with ray-traced shadows. Thanks to ray-traced global illumination, the Military Base area is enhanced by real-time, interactive, indirect lighting, adding more detail. While exploring these environments, players will work to avoid obstacles and try to complete the deathrun as fast as they can!”

In total, these new titles contribute to a total of “more than” 25 games that now support Nvidia’s DLSS technology. Which is either a decent slew of games to get going with or a reminder that DLSS has yet to become the universal panacea for PC performance that Nvidia implied with the 2.0 release.

To quote Nvidia itself, “the original DLSS required training the AI network for each new game. DLSS 2.0 trains using non-game-specific content, delivering a generalised network that works across games.”

The reality, as this announcement shows, is that DLSS still requires game-specific implementation, even if the actual AI training doesn’t have to be.