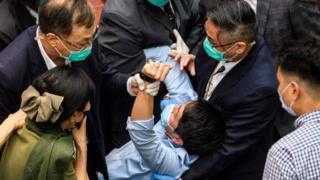 China’s ruling Communist Party has set in motion a controversial national security law for Hong Kong, a move seen as a major blow to the city’s freedoms.

Pro-democracy activists have called for mass protests against what they see erosion of Hong Kong’s autonomy.

Anger was already apparent on Friday, as a group of protesters descended on China’s Liaison Office in Hong Kong.

The draft law was submitted at the annual National People’s Congress (NPC), which largely rubber-stamps decisions already taken by the Communist leadership, but is still the most important political event of the year.

Hong Kong, a semi-autonomous region and an economic powerhouse, was always meant to have introduced a security legislation after the handover from British control to Chinese rule in 1997.

After last year’s wave of sustained and violent protest, Beijing is now attempting to push them through, arguing “law-based and forceful measures” must be taken to “prevent, stop and punish” such protests in the future.

On Friday, Hong Kong’s government said it would co-operate with Beijing to enact the law, adding it would not affect the city’s freedoms.

The law has rattled financial markets, causing Hong Kong’s Hang Seng Index (HSI) to drop by more than 5% on Friday.

What is in Beijing’s proposed law?

The “draft decision” – as it is known before approval by the NPC – was explained by Wang Chen, vice-chairman of the Standing Committee of the NPC.

It consists of an introduction and seven articles. Article 4 may prove the most controversial.

Hong Kong’s leader Carrie Lam, who is seen as part of the pro-Beijing political establishment, said the law would help authorities tackle illegal activity in the city.

China has long desired a new national security law for Hong Kong. Beijing believes almost a year of mass protests and, at times, paralysing confrontations on the streets shows that now it is needed more than ever.

But critics point to what they say are ambiguities inherent in such a law and the broad, generalist framework it would bring to a place which has a very different legal tradition than the communist-controlled mainland.

“Treason, sedition and subversion” are all open to a very wide interpretation. Up to now, the worst charge most arrested protesters have faced has been for rioting.

The notion of “terrorism” also features in this proposed law. That too could encompass wide-ranging acts and activities that the authoritarian rulers on the mainland consider far more menacing than those in Hong Kong, or for that matter elsewhere.

China could essentially place the draft law into Annex III of the Basic Law, which covers national laws that must be implemented in Hong Kong – either by legislation, or decree.

The NPC is expected to vote on the draft law at the end of its annual session, on 28 May.

It will then be forwarded to the NPC’s Standing Committee, China’s top legislature, which is expected to finalise and enact the law by the end of June.

What do opponents say the dangers are?

Hong Kong is what is known as a “special administrative region” of China.

It has observed a “one country, two systems” policy since Britain returned sovereignty in 1997, which has allowed it certain freedoms the rest of China does not have.

Pro-democracy activists fear that China pushing through the law could mean “the end of Hong Kong” – that is, the effective end of its autonomy and these freedoms.

“This is the largest nuclear weapon the Chinese Communist Party has used in its mutual destruction of Hong Kong,” Jimmy Sham, a pro-democracy activist who played a leading role in last year’s protests.

Last year’s mass protests in Hong Kong were sparked by a bill that would have allowed extraditions to mainland China.

The bill was paused, then withdrawn – but the protests continued until the coronavirus outbreak at the end of the year.

The US has also weighed in, with President Trump saying the US would react strongly if it went through – without giving details.

It is currently considering whether to extend Hong Kong’s preferential trading and investment privileges.

The UK’s Foreign and Commonwealth Office said it was “following reports and monitoring the situation closely”.

“We expect China to respect Hong Kong’s rights and freedoms and high degree of autonomy. As a party to the [Sino-British] Joint Declaration, the UK is committed to upholding Hong Kong’s autonomy and respecting the ‘One Country, Two Systems’ model,” a statement said.

Why is China doing this?

“Considering Hong Kong’s situation at present, efforts must be made at the state-level to establish and improve the legal system and enforcement mechanisms,” he is quoted as saying in state media.

If last year’s success for pro-democracy parties in district elections is repeated, government bills could potentially be blocked.

In a separate development, a number of pro-democracy lawmakers were dragged out of Hong Kong’s legislative chamber during a row about a Chinese national anthem bill on Friday.

What is Hong Kong’s legal situation?

Hong Kong was under British control for more than 150 years up to 1997.

The British and Chinese governments signed a treaty – the Sino-British Joint Declaration – that agreed Hong Kong would have “a high degree of autonomy, except in foreign and defence affairs”, for 50 years.

This was enshrined in the Basic Law, which runs out in 2047.

Newspaper headlines: 'No regrets' for Dominic ...