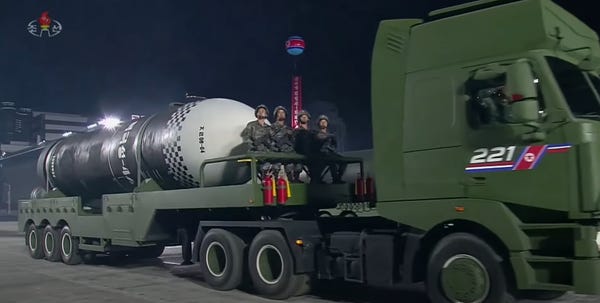 In October, North Korea unveiled new military hardware in a parade marking the 75th anniversary of the Workers’ Party of Korea.

The biggest attention-getters were, unsurprisingly, the missiles, especially the Pukguksong-4 submarine-launched ballistic missile (SLBM), and the Hwasong-16, which, if real, would be the largest liquid-fueled and road-mobile missile ever made.

But before those missiles appeared at the end of the parade, North Korea’s impressive modernization of its conventional forces was on full display.

Chun In-bum, a former lieutenant general in the South Korean army, described the parade as “literally a ‘new look’ for the North Korean People’s Army (KPA) in almost every way.”

The parade undoubtedly shows that North Korea’s commitment to military modernization is bearing fruit, but it remains unclear just how far that modernization has gone.

Aside from the missiles, the new armored vehicles received the most attention.

While little is definitively known about these vehicles, observers noted a number of things based on their appearance. The 8 x 8 wheeled armored combat vehicle, for instance, looks almost exactly like the US Army’s Stryker ICV.

Two variants were shown: One armed with five anti-tank guided missile launchers that are likely copies of the Russian 9M133 Kornet, and another armed with a specially designed turret that appears to house a gun based on the D-30 122 mm howitzer, giving it a similar appearance to the M1128 Mobile Gun System.

Both vehicles are likely intended to support anti-tank and fire-support operations, and help the KPA become more maneuverable in a similar way to the US Army’s brigade combat teams.

The new tank is considerably more advanced than previous North Korean models. Its chassis looks similar to that of Russia’s T-14 Armata, and the turret is reminiscent of the US’s M1 Abrams. It also appears to have a number of new technologies, like composite armor.

Tubular launchers reminiscent of Russia’s Afghanit active protection system (APS) appear to be mounted on the turret, meaning the tank could intercept incoming projectiles. The lack of infrared sights suggests the tank may have a thermal sight — a major improvement for North Korean tanks.

There also appeared to be smoke launchers, laser warning receivers, and crosswind sensors. Two side-mounted anti-tank missile launchers were also present on the turret of the tanks, which were strangely painted in a desert-camouflage scheme.

There were a number of other new systems in the parade as well.

Generals and senior officers were driven around in what looked like mine-resistant ambush protected (MRAP) vehicles. New 155 mm self-propelled guns were rolled out, as were new armored multiple launch rocket systems and a new anti-air defense and radar comparable to Russia’s TOR system, which fills a gap in North Korean air defenses.

The parade was the latest indication that Kim Jong Un is accelerating North Korea’s military modernization efforts, a trend that has been evident with its nuclear weapons and missiles.

“Kim Jong Un was able to achieve this,” Dr. Sue Mi Terry, a senior fellow and Korea Chair at the Center for Strategic and International Studies, said of the efforts.

“Some people really underestimated him when he came into power,” Terry told Insider. “But at the end of the day, all this modernization took place under him.”

Kim has made strengthening his country’s military his top priority and wants to prove that despite international pressure and tight sanctions, North Korea is capable of fielding a strong force.

“They want to show that since Singapore they’ve been making progress,” Terry said, referring to Kim’s 2018 meeting with President Donald Trump. “That’s the main message, that they’re not going to stop.”

As impressive as the new hardware is, there is reason to believe that the parade may have been a display of systems and weapons that North Korea may not actually have, at least not yet.

“Every parade is a Potemkin parade in the sense that North Korea always wants to hype up what they have,” Terry said.

For example, despite the new tank’s impressive electronics, none of the boxes containing the optics were open, which means no one can be sure what is inside them.

Additionally, many of the systems have not been seen in tests or military exercises, which means they could just be mockups — especially the Pukguksong-4 and Hwasong-16 missiles. This is also the case for North Korea’s ballistic-missile submarines, the Gorae-class and Sinpo-C-class.

Finally, North Korea simply may not have the resources to build and maintain such a large conventional force.

“I sincerely doubt that much of that stuff is seriously propagated among the North Korean forces,” said Dr. Bruce Bennett, a senior defense analyst at the RAND Corporation.

North Korea can’t fund its nuclear and conventional ambitions and the economy its elites desire, Bennet told Insider. “The money is just not there.”

Despite the hype, it’s clear that military modernization has “made some kind of progress,” Terry said, but it’s likely that only certain specialized units have benefited from it.

“I think what we saw in the parade was really very selective modernization,” Bennett said. “Take those [infantry] soldiers that we saw. I’ll bet they’re almost all special forces.”

North Korea’s Special Operations Force, one of the KPA’s five branches, accounts for only 200,000 of the KPA’s nearly 1.3 million active-duty personnel, but it is expected to have a primary role in a conflict.

While the KPA’s conventional military modernization is impressive, there is little doubt it remains qualitatively inferior to South Korea’s military and no doubt it is inferior to the US military.

But North Korea’s real power is its nuclear arsenal. Pyongyang has made clear that it has no reservations about its tactical deployment, meaning it’d likely be front and center in any combat scenario.

With an arsenal believed to be between 30 and 40 warheads, North Korea can use those weapons to destroy important infrastructure like airfields, military bases, and ports, preventing reinforcement and resupply efforts.

“The North Korean approach could impair the South Korean air capability. It could impair our deployment capability,” Bennet said. “Then all of the sudden, their conventional capabilities, even if they’re only very selectively modernized, might make a big difference. With [North Korea’s] special forces out there with that kind of equipment, that gets a little daunting for South Korea.”

That approach would most likely result in North Korea’s destruction, but being able to do it gives Kim “tremendous coercive capability against the South,” Bennet said.

The KPA’s evident modernization, combined with Pyongyang’s growing nuclear and missile arsenal, put Kim in a position to assert himself and limit the US’s leverage in future negotiations.

“Kim Jong-un is a very different kind of leader,” Terry said. “I think it’s better for us to not underestimate him.”