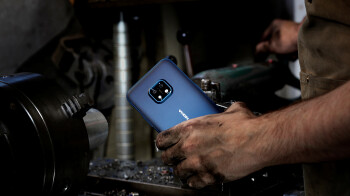 HMD Global brand Nokia just revealed two new phones, which the company says are built to last a long time. The Nokia XR20 and the Nokia C30 are made with the mobile brand’s new motto in mind: “Love it, trust it, keep it”. What this means is that Nokia promises you years of software and security updates with its new devices. In turn, this should make you keep the phones for longer, or at least that’s what the HMD Global-owned brand thinks will happen. Let’s take a look at the new Nokia phones.

The Nokia XR20 is the first “life-proof” smartphone by the company. This means that it is built to last, both hardware and software-wise. The phone is made to military standards, more specifically, the MIL-STD-810H. It also has IP68 water resistance certification. What this means is that this phone can withstand drops, water, and dirt without problem. Nokia even encourages you to wash it with soap when it gets dirty. The new phone can work in temperatures of +55 to -22 degrees celsius, 1 hour underwater, and drops from up to 1.8m height.What is interesting about the design of the Nokia XR20 is that even though it is built to be rugged, it doesn’t look like your regular rugged phone. Yes, it’s made out of rubberized and sturdy materials and it is indeed on the thick side, but its overall look does not stand out from non-rugged smartphones, which is good.

The front of the XR20 is covered by Gorilla Glass Victus, which is the toughest glass ever put in a Nokia branded phone. The screen also reacts to the touch of wet hands and gloves, which we must admit is pretty neat. On its back, the phone has a slight camera bump located in the middle, but at least that means it won’t wobble on a table.


A fingerprint scanner is located on the side of the phone. More interestingly, the Nokia XR20 has an additional programmable button located on its top, which gives the phone more functionality.

As for practicality, the new built to last Nokia branded phone has both a 3.5mm headphone jack and a MicroSD card slot for expandable storage. The device even has a 3-axis E-compass and a barometer for more adventurous types of people.

The tough-made Nokia also has extra loud sound speakers with OZO playback technology, and according to the brand, its phone can compete with small bluetooth speakers and beat them to the punch. The Nokia XR20 will be offered in two color options: Ultra Blue and Granite.

The screen of the Nokia XR20 is a 6.67-inch LCD panel with FHD+ resolution. It gets plenty of bright, with its peak brightness reaching 550 nits according to Nokia, but unfortunately, it is only a 60Hz refresh rate panel. Like we mentioned before, the screen is covered by Gorilla Glass Victus, which should withstand most of the drops you throw at it.

Even though this is a rugged phone, it keeps the bezels of its display relatively small, especially compared to other rugged rivals like the recently released Motorola Defy.

Camera-wise, the Nokia XR20 has a dual-camera system consisting of a 48MP main shooter and a 13MP ultra-wide camera. The cameras have ZEISS optics and feature OZO Spatial Audio capture with wind-noise cancellation.

Something interesting to know, this phone has both a dual-tone LED flash and a single LED flash. This means that you can count on one of the brightest flashlights found in phones ever. The front camera is an 8MP punch-hole unit located in the middle, which is a bit underwhelming considering nowadays phones often come with 32MP selfie shooters.

HMD Global’s newest Nokia X-lineup model has a 5G enabled Snapdragon 480 processor. The XR20 has 4 or 6GB of RAM and 64 or 128GB of storage, depending on the version you choose. Of course, you can always upgrade your storage with the phone’s memory card slot by up to 512GB.

As for the software, the Nokia XR20 runs Android 11 out of the box. The Nokia brand promises three years of software updates for this phone, which should mean that it will not only get Android 12 but also Android 13. Additionally, the brand promises one more year of monthly security updates.

Battery-wise the XR20 has a 4,630mAh unit with 18W fast wired charging and 15W wireless charging. According to the brand, the battery should last you two days easily.

The Nokia XR20 will start at $549.99 and will be available to buy in the U.S. on the company’s online store on August 24. Globally, the phone will be available on July 27 with a price of around €499 in select markets.

HMD Global’s latest addition to its C series entry-level smartphones has both the biggest battery and display ever put in a Nokia branded smartphone. Unsurprisingly, the Nokia C30 has a plastic, conservative design which doesn’t impress with anything in particular. It is a bit on the thick and heavy side, with the phone being 237g in weight and 9.9mm in thickness.

The front of the phone has a teardrop style notch and a big bottom bezel. Its back has a slight camera bump located in the middle, below it you can find the fingerprint scanner. We are a bit disappointed to see that the loudspeaker is also located on the back and looks to be on the tiny side.

The Nokia C30 will be offered in three colors: White, Dark Grey, and Green.

Nokia’s biggest screen put in a smartphone yet is a 6.82-inch LCD panel with HD+ resolution. This doesn’t sound impressive, but let’s not forget the C30 is a budget phone.

As for the cameras, the Nokia C30 has a dual-camera system with a 13MP main camera and a 2MP depth sensor. The front camera is a 5MP unit with a teardrop style design.

The Nokia C30 is powered by a Unisoc SC9863A processor coupled with 2 or 3GB of RAM. Yes, this processor isn’t a powerhouse, and for that reason, the C30 runs Android 11’s Go edition, which is designed for lower specced entry-level devices.

The storage is 32 or 64GB in size but that number can be increased by up to 256GB with the phone’s memory card slot.

Where the Nokia C30 shines the most is the battery life department. The budget-friendly smartphone packs a chunky 6,000mAh battery unit, which according to Nokia will last up to three days. The phone does not support fast charging, but at least you won’t run out of juice quickly.

Nokia C30’s battery lasts up to three days, which is impressive

The Nokia C30 costs around €99 and will be available in select markets globally starting on July 27.