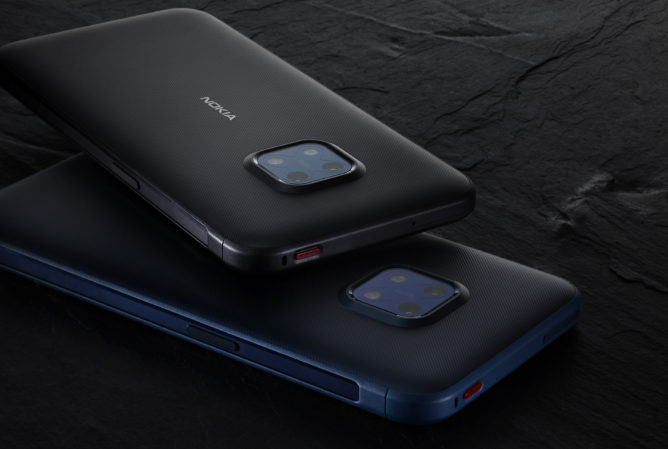 After an uncharacteristic foray into the world of smart lighting, HMD Global just got back to business with the introduction of several new Nokia phones and accessories. The headline new piece of hardware is the XR20, a “don’t call it rugged” phone that has some serious durability credentials while still looking like something you’d want to carry around. Also in tow is the C30 entry-level handset, a new feature phone, and far too many new sets of earbuds.

With the XR20, HMD set out to make a phone that could take a real beating without looking like some sort of heavily armored military equipment. It looks to have succeeded in this — the device can easily withstand drops of 1.8m, it can be washed with soap and water if it gets dirty, and its Gorilla Glass Victus display is a tough as it gets. Before you get too excited, a Snapdragon 480 5G chipset sits among a variety of other low-end specifications. Don’t expect sturdy performance to match the exterior.

Despite the modest spec sheet, the XR20 does boast some interesting features. It can record and play OZO spatial audio, for one. And while the hardware is designed to be durable, so is the software — it launches with Android 11 and will get OS updates for three years and another year of security updates on top of that. It’s battery should be big enough for two-day battery life and it can even be charged wirelessly, unlike most phones in this price bracket.

In less exciting news, the Nokia C30 is an Android Go Edition phone with very low-end specs. It does boast the largest battery and display of any Nokia phone, but it only charges at 10w and the display is just HD+, so it won’t exactly look great. It’s got an unspecified octa-core processor (never a good sign), 2GB of RAM with 32GB of storage, and — worst of all — it’s got a Micro-USB port.

The C30 is a serious phone for serious people, apparently.

The Nokia C30 isn’t coming to the US, but in the UK, it will retail for £99. You’ll be able to get it from Three.co.uk in a dark grey colorway.

HMD also announced the Nokia 6310 feature phone that will go on sale in August for £49.99 and host of new true wireless earbud models. A total of four new earbud ranges are on the way (Go, Micro, Comfort, Clarity) aimed at different audiences and price brackets.

The Nokia Clarity Earbuds Pro (above) will be the top-of-the-range set, available in September for £99.