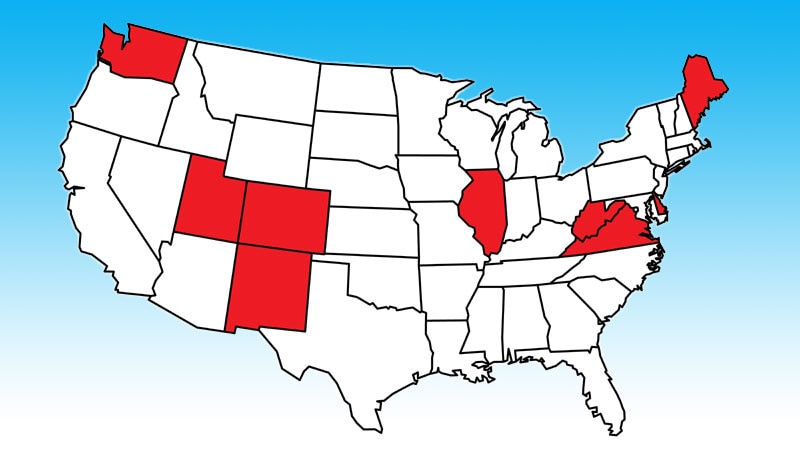 Nine US states have passed laws aimed at making insulin more affordable — and more than 30 are considering such legislation — but they all have gaps that still put the cost of this basic and essential medication out of reach for many with diabetes.

The laws only apply to health insurance through state-regulated plans, and not to the majority of health plans that cover most Americans: Medicare, Medicaid, the VA health system, or self-funded employer-sponsored plans.

Overall, the diabetes advocacy group T1 International estimates state laws that limit copays, deductibles, or other out-of-pocket costs for insulin cover only 27% of people with diabetes.

And while diabetes activists have applauded state actions, most want more help for the under- and uninsured.

“Our chapter will be fighting harder next legislative session for the uninsured,” said Mindie Hooley, the leader of the Utah #insulin4all chapter, which successfully lobbied legislators to pass a bill signed by the state’s governor on March 30.

“With so many losing their jobs because of the pandemic, there’s no better time than now to fight for these patients who don’t have insurance,” Hooley told Medscape Medical News.

The American Diabetes Association (ADA) has also been lobbying for state caps as one of many avenues for making insulin more affordable, said Stephen Habbe, the ADA’s director for state government affairs.

The state laws “can really provide important relief in terms of affordability for their insulin costs, which we know can be critical in terms of preserving their life and helping to prevent complications that can potentially be disabling or even deadly,” he told Medscape Medical News.

Activists with T1 International, which created the #insulin4all campaign, are working nationwide to convince state legislators to back measures that limit out-of-pocket costs for insulin, or for other diabetes medications and supplies.

The three insulin manufacturers in the United States — Eli Lilly, Novo Nordisk, and Sanofi — have not overtly fought against the laws, although in July, the Pharmaceutical Research and Manufacturers of America (PhRMA) did sue to block a related Minnesota law that provides a free emergency supply of insulin.

And the nonprofit news organization FairWarning reported in August that a lobbyist from Eli Lilly had attempted to push a Tennessee legislator to keep the uninsured from being eligible for any out-of-pocket limits.

The insulin makers have also not lowered prices in response to the mounting number of state laws.

“You’re going to do what you can get away with,” O’Neill Hayes told Medscape Medical News. “To the extent that they can keep their prices high and people are still buying, they have limited incentives to lower those costs.”

The insulin market is dysfunctional, she added. “The increasing cost of insulin seems primarily to be the result of a lack of competition in the market and convoluted drug pricing and insurance practices,” O’Neill Hayes and colleagues wrote in a report in April on federal and state attempts to address insulin affordability.

Novo Nordisk, however, maintains that drug makers are not solely to blame.

“Everyone in the health care system has a role to play in affordability,” said Ken Inchausti, Novo Nordisk’s senior director for corporate communications. State legislation “attempts to address a systemic issue in [US] healthcare: how benefit design can make medicines unaffordable for many, especially for those in high-deductible health plans,” he told Medscape Medical News.

Sanofi spokesperson Jon Florio said the company supports actions that increase affordable access to insulin. However, “While we support capped copays, we feel this should not be limited to just one class of medicines,” he said. Florio also noted that Sanofi provides out-of-pocket caps to anyone with commercial insurance, and that anyone without insurance can buy one or multiple Sanofi insulins for a fixed price of $99 per month, up to 10 boxes of pens and/or 10-mL vials.

And Sanofi will take part in the Centers for Medicare & Medicaid Services’ (CMS) new insulin demonstration program. Starting in 2021, CMS will cap insulin copays at $35 for people in Part D plans that participate.

Eli Lilly spokesperson Brad Jacklin said the company “believes in the common goal of ensuring affordable access to insulin and other life-saving medicines because nobody should have to forego or ration because of cost.”

Lilly supports efforts “that more directly affect patients’ cost-sharing based on their health care coverage,” he told Medscape Medical News. Insurers and pharmacy benefit managers (PBMs) should pass savings on to patients, Jacklin urged. Lilly caps some insulins at $35 for the uninsured or commercially insured. The company will also participate in the CMS program.

Meanwhile a PhRMA-sponsored website www.letstalkaboutcost.org says that because they do not share savings, insurers and PBMs are responsible for high insulin costs.

Manufacturer assistance programs for patients with diabetes and other chronic diseases, on the other hand, can save individuals $300 to $500 a year, PhRMA said in August.

PBMs Point Back at Insulin Manufacturers

PBMs, however, point back at drug companies. “PBMs have been able to moderate insulin costs for most consumers with insurance,” said JC Scott, president and CEO of the Pharmaceutical Care Management Association (PCMA), the PBM trade group, in a statement.

The rising cost of insulin is due to lack of competition and overuse of patent extensions, PCMA maintains.

Health insurers, which, in tandem with PBMs, give insulins formulary preference based on a discounted price, are most likely to feel the impact of laws limiting out-of-pocket costs.

If they have to make up the shortfall from a patient’s reduced payment for a prescription, they will likely raise premiums, said the analyst, O’Neill Hayes.

And if patients pay the same price for insulin — regardless of who makes it — drug makers won’t have much incentive to offer discounts or rebates for formulary placement, she said. Again, that would likely lead to higher premiums, she added.

“High prices for insulin correspond with high health insurance costs for insulin,” he said. When CMS starts requiring drug makers to discount their insulins for Medicare that will allow “health plans to use those savings to reduce out-of-pocket [costs] for seniors,” he observed.

He did not respond to a question as to why health insurers were not already passing savings on to commercially insured patients, especially in states with out-of-pocket limits.

Allen did say that AHIP’s plans “stand ready to work with state policymakers to remove barriers to lower insulin prices for Americans.”

In Utah, legislators tuned out the blame game, and instead were keen to listen to patients, who had many stories about how the high cost of insulin had hurt them, said Hooley, the state activist.

She noted an estimated 50,000 Utahans rely on insulin to stay alive.

Hooley and her chapter convinced legislators to pass a bill that gives insurers the option to cap patient copays at $30 per month, or to put insulin on its lowest formulary tier and waive any patient deductible. That aspect of the law does not go into effect until January 2021, but insurers are already starting to move insulin to the lowest formulary tier, she explained.

That has helped some people immediately. One state resident said her most recent insulin prescription cost $7 — instead of the usual $200.

The uninsured are not left totally high and dry either. Starting June 1, anyone in the state could buy through a state bulk-purchasing program, which guaranteed a 60% discount.

Hooley said she’d recently heard about a patient who usually spent $300 per prescription but was able to buy insulin for $100 through the program.

“Although $100 is still too much, it is nice knowing the Utah Insulin Savings Program is saving lives,” Hooley concluded.