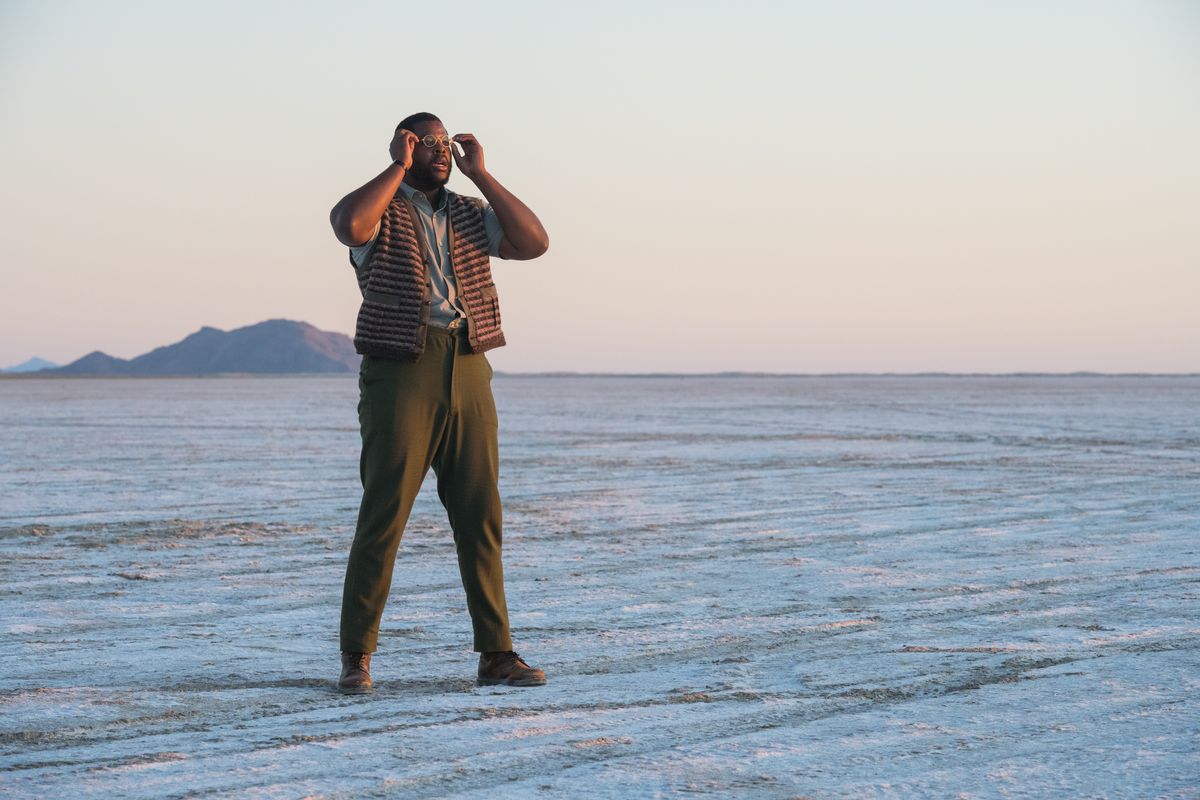 [Ed. note: This review was first published in conjunction with Nine Days’ release at the 2020 Sundance Film Festival. It has been updated for the film’s theatrical release.]

Logline: In a barren, surreal, pre-life place, a bureaucrat auditions potential humans and decides who gets to be born, until he has a crisis of faith over a past choice.

Longerline: Back in 1998, Japanese director Hirokazu Kore-eda (Shoplifters, Nobody Knows) made one of the most charming, distinctive dramas of the decade: After Life, a touching movie about the processes people go through after they die. In his vision, the dead go to a run-down, low-tech office, where otherworldly bureaucrats help them sort through their lives and pick a perfect memory to re-create and re-experience. Once that process is complete, the dead move on. It’s unclear what they do with those final memories, or who set the whole system in motion, but none of that matters: The relevant part is the peace and thoughtfulness that sets in after life is over, and the process of sifting through what mattered.

Edson Oda’s debut feature Nine Days owes a lot to After Life in its tone, plot details (including the idea of low-tech re-creations of moving moments), and aesthetic (including the same retro tech). It’s more passionate and pained, with less of that sense of peace setting in, but it mimics the sense of a gentle bureaucracy looking through all of life’s experiences, and deciding what truly matters. But instead of coming across as a copy, it’s a perfect companion piece, a film that feels like it could take place in the same universe, even though it tells a completely different story.

Winston Duke (Black Panther, Us) stars as Will, a mildly fussy, repressed bureaucrat tasked with interviewing and testing people to “fill vacancies” on Earth. After sending someone off to be born, he monitors their lives in real time on a wall of old television sets, making notes about their progress. When one of his charges dies, a batch of new souls appears, each with a personality already more or less fully formed. Will interviews and tests them over a nine-day period, then selects one for birth. The rejects simply fade into nothing — but first, Will lets them select a moment from an earthly life that they saw and found meaningful on his monitors, and he tries to let them experience that moment before they go.

Will feels like he’s been doing this for a long time, with little company except the new souls and his assistant and friend Kyo (Doctor Strange’s Benedict Wong). But when something terrible happens to one of his selectees on Earth, Will begins to obsess over understanding exactly what happened to her, which clouds his logic as he meets her potential replacements.

Those interviewees have radically different approaches to the possible lives ahead of them. Kane (Bill Skarsgård, the Pennywise of the IT movies) is a fierce young man who sees violence as a possible solution to many of the questions Will poses about how he’d behave on Earth. Alex (Arrested Development’s Tony Hale) is more laid back and just wants to enjoy a beer and a barbecue in Will’s company. Mike (David Rysdahl) is a talented artist without the courage to defend or even accept his own work. Maria (Arianna Ortiz) is a sensitive, quiet type who mostly wants to please Will with the right answers. And Emma (Deadpool’s Zazie Beetz) is calmly independent, shunting aside Will’s quizzes and focusing on her own passions. The fact that only one of them will survive more than a few days gives Nine Days some pathos, but also sets the scene for a series of explorations of what it means to be human, for better or worse.

The quote that says it all: “You are being considered for the amazing opportunity that is life.”

What’s it trying to do? In the most reductive sort of way, Nine Days could be boiled down as a film celebrating the experience of life and reminding viewers to value every moment and fully take advantage of every opportunity. It’s certainly sobering to see Will’s candidates becoming so profoundly moved and thrilled by the few bare moments of life that they get to experience. No one ever says anything as trite as “live to the fullest and value every moment” — this isn’t a preachy or rote movie. But it’s hard to miss how much life is valued by the people who’ve never gotten to experience it, and how clearly they find beauty even in the most mundane moments they get to witness. In that sense, it feels like a companion piece for Pixar’s Soul, yet another movie concerned with how the world before life is defined by the experiences people get to have on Earth.

Does it get there? Nine Days is an uncommonly moving and well-crafted movie that sells the “carpe diem” message in a dozen ways without nagging the audience about it, and without the kind of overbearing sentimentality that usually accompanies that message. There’s a quiet drama to the idea that most of the new souls turning up on screen will be gone forever within a few days, and a tension to the question of who Will is going to choose. But the movie never falls out like the tense reality-show competition it could be. It isn’t about who “wins.” It’s about Will’s emotional state as he tries to remain cool and professional, even though he’s slowly coming apart.

Nine Days is ultimately Will’s story, but Oda expertly gives all the characters their own little arcs, and turns their interactions with Will into rich and subtle reveals of their characters. The script never really explains the rules of the before-life. Viewers must intuit or witness them as they become relevant, and it gives Kyo the chance to theorize about an even larger universe around them. Oda also reveals his setting one small piece at a time: Will lives in a run-down ranch house in the middle of a vast empty desert (the film was shot in Utah), a place that doesn’t entirely feel real. There’s more to it, and like everything else in the film, the other possibilities of this place unfold when the timing is right. But in the meantime, Oda takes advantage of the setting to deliver some beautifully barren shots, and to contrast them with the claustrophobia of Will’s house — and his life.

Duke has always been a tremendous talent, but Nine Days is a feast for him, a chance to whisper and roar, to play the rigidly emotionless bureaucrat laying out the rules and the disintegrating trauma victim mourning for everyone he’s sent to their fates among the living. (In a particularly low moment, he snarls at Kyo, “I send flowers, and other people send pigs to eat them!”) It’s a profound and complicated role, and he executes it brilliantly. Beetz is also remarkable — a lesser version of this film would turn her into a perky Pixie Dream Girl, all winsome bounce and kittenish appeal. But Beetz plays Emma almost as a philosopher-child, naïve about everything, but endlessly interested in the world’s possibilities. She’s never cute, and often subtly annoying to Will, but she embodies a kind of quiet joie de vivre that doesn’t need to be oversold.

There are elements of Krzysztof Kieślowski’s The Double Life of Veronique in Nine Days, in the swoony way Will’s favorite charge on Earth lives for music, and in her ultimate fate. There are hints of The Truman Show in the panopticon that lets him monitor their lives, and of Albert Brooks’ Defending Your Life in the conceit and execution, as Will puts his candidates through a metaphysical trial to see what they’re made of. And there are echoes of After Life running throughout the film, in everything from the fascination with VHS tapes to the candidates who rebel against the system. But Nine Days is still uniquely its own movie, telling a strange and wonderful story in a way that suggests profound attention to each detail of each character, to the setting, and to the way people experience actual life — both in the intense, important moments, and in the mundane ones.

What does that get us? An absolute masterpiece. Nine Days’ unconventional setting and premise are a minor thrill all on their own, but the actual execution of the story is moving and confident. Oda takes his time with everything, but subtly builds up his characters in layers until they feel real. He does the same with this strange world, which leaves many questions unanswered, but never makes it feel like the answers are necessary to understand the story. The whole film is a gentle poem about the importance of life, rather than a shout — until it does head for shouting, in a rousing end that dodges the most obvious clichés on the board. It’s the kind of movie that makes a director’s name.

The most meme-able moment: This really isn’t a movie for memeing, but there’s an exceptionally lovely desert shot of Duke and Beetz moving toward each other in silhouette, shot at extreme range so they’re tiny figures in a vast wasteland. Instagram types could probably slap some entertaining labels on that.

When can we see it? Nine Days debuts in theaters on July 30.