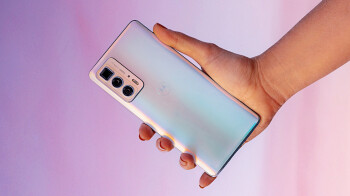 The new Motorola Edge series is finally here, and the Edge 20 and Edge 20 Pro phones with a bunch of new features and improvements. Motorola’s new phones are flashy, elegant, and on par with the competition. They also have appealing pricing. We already covered the entry-level model from the series, the Motorola Edge 20 Lite, in another story, so make sure to read that one too. Here is everything you need to know about Motorola’s premium 2021 phones – the Edge 20 and the Edge 20 Pro.


Motorola’s top Edge 20 model, the Edge 20 Pro, is also the most premium-looking. This phone is designed to be modern and on par with the competition. Two of its color variants, Midnight Blue and Iridescent White, have a shiny glossy finish that looks really pretty. There is another color option called Blue Vegan Leather, and just like its name suggests, it has a leather-covered back with a blue accent, making for a better grip and getting rid of fingerprint marks. The camera module is still covered by glass though. The front of the Edge 20 Pro has a punch-hole selfie camera located in the middle. On its back, there is a triple-camera module that slightly protrudes from the body. Don’t be fooled by the brand’s logo below next to the cameras, the fingerprint scanner is an in-display one, just like it was on last year’s Motorola Edge phones. The display of the Edge 20 Pro is covered by Corning Gorilla Glass 5, and the back of the Motorola is also glass.

The new Pro model has an IP52 water dust resistance rating and a thickness of just 7.99mm. The IP52 rating means the phone can withstand the occasional drops of water. The speaker is located on the bottom side of the phone next to its USB-C charging port which also doubles as a display port. The Edge 20 Pro weighs 190g for its glass-covered versions and 185g for the vegan leather one.

This premium-looking Motorola is pretty good in the display department. The screen is no longer curved like the 2020 phones from this series. The Edge 20 Pro has a big, 6.7-inch 144Hz OLED with an FHD+ resolution and a 576Hz touch sampling rate. This makes the screen perfect for playing games. It also means that you can expect one of the most fluid Android experiences. As for the phone’s cameras, they sound impressive too. The Motorola Edge 20 Pro’s triple-camera system consists of a big, 108MP main camera sensor with an f/1.9 aperture and the company’s Ultra Pixel technology, which means it captures bigger pixels, improving the overall picture quality. The second camera is an 8MP 5x zoom telephoto lens with OIS, allowing the Edge 20 Pro to have up to 50x hybrid zoom, white the stabilization keeps your image steady.

The third camera is a 16MP ultrawide shooter with macro vision. The Edge 20 Pro can record a video in 8K 24fps. Selfies taken with this phone should be sharp too, as it packs a 32MP punch-hole-style shooter with an f/2.25 aperture.

The new Pro phone is powered by a Snapdragon 870 processor that is 5G enabled. This processor is an overclocked version of the Snapdragon 865 which was used in last year’s Motorola Edge+.

As for the memory, the Edge 20 Pro is here to impress. It packs a whole 12GB of RAM and 256GB of storage. This phone does not only support 5G, but also the new Wi-Fi 6 standard and Bluetooth 5.1.

Motorola’s near-stock software philosophy continues with this phone as well. The Edge 20 Pro comes with Android 11 out of the box and brings all of the company’s software tweaks many people have come to love. This phone supports Motorola’s Ready For platform. Ready For lets you connect with your big screen TV or your desktop computer wirelessly. That way you have access to your games, photos, videos, and more on another device of yours. You can also simultaneously see both your phone and your computer’s files on your desktop screen.

No concerns in this department too. The new Motorola Edge 20 Pro packs a 4,500mAh battery with 30W fast wired charging, but unfortunately, no wireless charging capabilities. The power adapter comes in the box. We have to say, 30W is a bit on the low side, but considering the phone’s battery size it doesn’t look like you’ll need to charge it during the day.

The high-end Motorola Edge 20 Pro will be priced at €699 and be available to purchase in the coming weeks. The phone’s packaging includes a 30W charger, USB-C to 3.5mm audio adapter, and a case (packaging and pricing may vary in different markets). We still don’t know whether the phone will come to the United States, and so far Motorola has only announced availability for Europe, but we’ll update you on US availability as soon as we know more.


The design of the Motorola Edge 20 by looking at its pictures is very modern and nice to the eye. This phone looks sleek and premium made. The mid-ranger of the series is only 6.99mm thick. Some people might love how slim it is, while some might hate it. We should definitely appreciate Motorola’s effort to create something that will stand out from the crowd, even if it is with how slim the phone is.

Other than that, the Edge 20 rocks a familiar design on its front, with a punch-hole camera located in the middle. The display is covered by a 2.5D Corning Gorilla Glass 3. Its back is made out of plastic. The front and back sides of the phone are held together by an aluminum frame.

We can’t imagine this phone to be the most comfortable to hold in hand, with its slim design, protruding camera module, and sharp metal frame, but hey, at least it looks good. Just like its more expensive brother, this phone is IP52 dust and water resistant.

The Edge 20 is pretty light for its size, with a weight of 163 grams. The Motorola Edge 20 will be offered in three color options: Frosted Grey, Frosted White, and Frosted Emerald.

Good news, the Edge 20 has the same gorgeous display as its Pro sibling. It is again a 6.7-inch 144Hz OLED panel with an FHD+ resolution and a 576Hz touch sampling rate.

As for the cameras, the main shooter also stays the same as the one on the Pro version, a 108MP f/1.9 aperture sensor. The telephoto lens is an 8MP 3x zoom sensor with OIS. The ultra-wide camera is borrowed from the more expensive Edge phone as well. It is a 16MP f/2.2 sensor with macro vision. Unfortunately, this phone cannot shoot video in 8K like its Pro version. The video resolution tops at 4K 30fps on the Motorola Edge 20.

Maybe you got a hint that this phone is less powerful than its Pro sibling by its video shooting capabilities. If so, you are right. The new mid-ranger has a Snapdragon 778G processor, which is 5G enabled. The chip is combined with 8GB of RAM and 128 or 256GB of storage.

Software-wise the Edge 20 is the same as the Pro phone – Android 11 out of the box with the company’s My UX user interface. The Edge 20 also supports the Motorola Ready For software platform that we mentioned earlier.

Because the Edge 20 is thinner than its Pro version, it has a thinner battery too. This reduces its size to 4,000mAh but no need to worry, this battery should still get you through the day. The new Motorola phone supports 30W fast wired charging with the charger included in the box. Like the Edge 20 Pro, this phone doesn’t have wireless charging either.

The Motorola Edge 20 is priced at €499. The phone should be available to buy in the coming weeks. In its box, you can find a 30W power brick, USB-C to 3.5mm audio adapter, and a case (packaging and pricing may vary in different markets). We still don’t know whether the Edge 20 will come to the United States, but we’ll update you as soon as we know more.