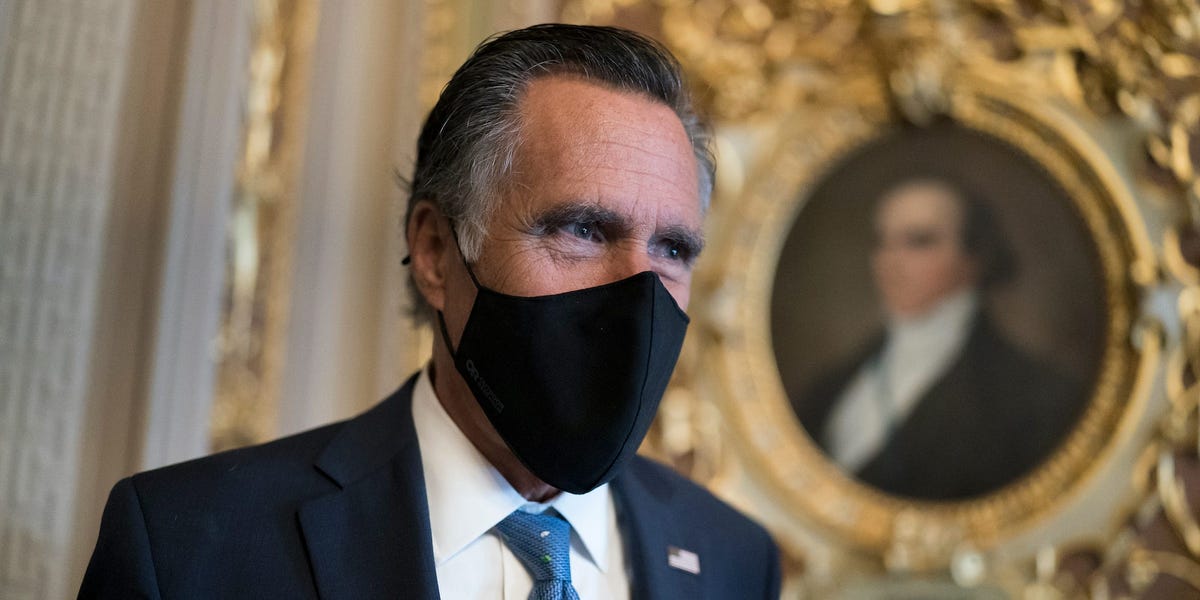 “Not a lot is happening behind the scenes that involves Republicans,” Romney told The Times’ Andrew Ross Sorkin. “I think the Democratic leadership has determined that they want to push through the plan without any changes to it whatsoever, and without any input from Republicans and because it’ll be done through budget reconciliation, they don’t need any of our votes.”

Through budget reconciliation, the Senate can pass budget-related legislation with just a simple majority of 51 votes instead of the usual 60-vote majority required in the Senate to get past the filibuster.

“I find it a very troublesome bill, not so much because of the price tag, which is pretty substantial, but because there’s a lot of stuff in there that’s just simply wasteful. I wish we could use the money in there that we’re going to go out and borrow from China to actually do things that’ll make a difference,” Romney said.

In a Wall Street Journal op-ed also published Tuesday, Romney called the bill “a clunker” that, in his view, is “filled with bad policies and sloppy math.”

In particular, Romney said much of the $350 billion in aid allocated in the bill to states currently experiencing budget surpluses could be put to better use.

“Most of our states didn’t have a bad couple of years. Most of our states are doing very well. Twenty-one states actually had their revenues go up during COVID,” Romney said, adding, “California has record surplus, for instance, but it’s slated to get $27 billion in borrowed money from the federal government.”

Romney said he “brought in a big map of the United States” to a meeting with Biden that “had a color code for the economic conditions of each state” to try to convey his concerns to the White House.

“He didn’t have a response to that,” Romney said. “He found my chart, I hope, interesting, and he and the vice president looked at it. But I pointed out that we’re sending to a bunch of states that don’t need it.”

The Senate is currently divided between 50 Democrats and 50 Republicans, with Vice President Kamala Harris serving as the tie-breaking vote.

Romney cautioned that reconciliation is a double-edged sword for the Democrats.

“What goes around comes around. We’ll be in the majority someday, and we’ll probably carry out the same kind of actions that they are, which is unfortunate,” Romney said.

The Utah Senator also opposes Democrats’ efforts to raise the federal minimum wage, which is currently $7.25 an hour, to $15 an hour through the stimulus package. Romney argues the jump from $7.25 to $15 will be too costly for small businesses.

The nonpartisan Congressional Budget Office found an increase to $15 an hour would cost 1.4 million jobs but would help 900,000 Americans get out of poverty.

It’s ultimately up to Senate parliamentarian Elizabeth McDonough to determine what can be included in a reconciliation package under the parameters of the Byrd rule, which states that matters “extraneous” to the budget process cannot be passed through reconciliation.

She’s expected to issue her ruling on the matter on Wednesday or Thursday, but even if she gives the green light for the $15 minimum wage increase to be in the bill, its inclusion could cost key votes Democrats can’t afford to lose.

Two key moderate Senate Democrats, Sen. Joe Manchin of West Virginia and Sen. Kyrsten Sinema of Arizona, have both said they oppose raising the minimum rage through the reconciliation process, with Biden telling a group of governors in a recent call not to count on a wage increase to $15 an hour being included in the package.

Romney and Republican Sen. Tom Cotton have introduced their own bill to raise the federal minimum wage to $10 an hour by 2025 while requiring all employers to use E-Verify to prevent the hiring of undocumented immigrants and impose harsher penalties on employers who do so.

The best home security gadgets you can buy » ...