Home > Finance > Meet the man after whom Galvan river is named

Meet the man after whom Galvan river is named 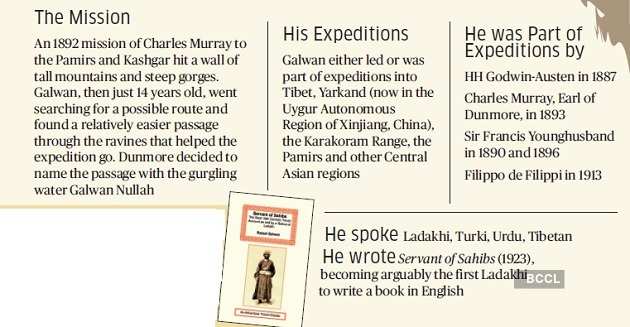 It’s probably safe to assume that you have by now heard of the Galwan river. Its valley is one of the flashpoints of the ongoing high-altitude standoff between the Indian and Chinese forces.

The river, which runs 80 km westwards from its origins in Karakoram range through Aksai Chin and east Ladakh to join the Shyok river, a significant tributary of the Indus, is deemed to be of strategic significance in this region, with simmering border tensions between India and China. The valley was also a flashpoint during the 1962 India-China war.

It is named after Ghulam Rassul Galwan, a hardy Ladakhi adventurer and explorer who assisted many famed European explorers at the turn of the 19th century. He later brought alive that world — of treacherous expeditions through high Himalayas during The Great Game, as Russia and Britain jostled for dominance in the region — in the book Servant of Sahibs.

He was also my great-grandfather.

Born in 1878, Galwan either led or was part of numerous expeditions into Tibet, Yarkand (now in the Uygur Autonomous Region of Xinjiang, China), the Karakoram range, the Pamirs and other Central Asian regions — mostly through inhospitable geographies with altitudes ranging from 5,000 m to 7,000 m above the sea level and where temperature plunged to -30 degree Celsius in the winter. At that temperature, an inadequately clothed person develops hypothermia in 10 minutes.

Galwan assisted and travelled with the legendary names of those times. In 1887, he travelled with Major HH Godwin-Austen, the English geologist who determined the height of K2, the world’s second tallest peak, also known as Mount Godwin-Austen. In 1892, he travelled with Charles Murray, the 7th Earl of Dunmore, on a trip thought to be a diplomatic or espionage mission. In 1890 and 1896, he travelled with Sir Francis Younghusband, the architect of the Anglo-Tibetan Treaty of 1904, which ensured long-term trade concessions for the British government. In 1913, he accompanied Italian zoologist Filippo de Filippi. These were just the better known among the expeditions of a man who appears to have been travelling nearly all of his relatively short life — he died at 47, in 1925.

During the 1892 mission with Murray, the 7th Earl of Dunmore, the group had hit a wall of tall mountains and steep gorges with no possible way out. Galwan, a 14-year-old boy at the time, went ahead searching for a possible route out of the labyrinth. To the group’s surprise, the boy found a relatively easier passage through the ravines that helped the expedition to go ahead without much difficulty or any casualty. Impressed, Dunmore decided to name the newfound passage through the edge of the gurgling water the “Galwan Nullah”, according to Ladakhi historian Abdul Ghani Sheikh.

“I have never heard of an instance of naming of major geographical feature after a native explorer. British names have been given but never heard of one being named after a local,” says Harish Kapadia, mountaineer, author and long-time editor of the Himalayan Journal.

The Ladakh of those days was a landscape stricken with poverty. Galwan was forced to go on risky, long-distance expeditions when he was just 12, to supplement the meagre and inconsistent income of his single mother, a winnower. But the path he chose due to compulsion later became a passion and he never looked back even after his material circumstances improved.

Starting out as a porter and pony man, he rose through the ranks to eventually become the aksakal or the chief assistant of the British joint commissioner at Leh.

For about 35 years, he assisted or led expeditions with British, Italian and American explorers. He spoke the native Ladakhi, Turki and Urdu and had working knowledge of Kashmiri and Tibetan, according to Ghani Sheikh. During the courses of his trips, Galwan also learnt English language and eventually wrote his autobiography. Ghani Sheikh reckons Galwan was probably the first person in the erstwhile state of Jammu and Kashmir to write an autobiography in English.

“When he joined my husband, he had an English vocabulary of a dozen words, and therewith an ambition to write ‘the story of his happened’ in English,” Katherine Barrett, who edited the book, would write in the Editor’s Introduction. In a bid to increase his vocabulary, her husband, the American adventurer Robert Barrett, spoke to Galwan in his style of broken English, exchanged notes and gave him the King James Bible and a copy of a 17th century travel book to read. Galwan kept jotting down the experiences of his trips and about various sahibs on thin paper and kept shipping them to the American editor for more than a decade.

“The thin sheets of manuscripts have been following us all over the world for fourteen years,” wrote Barrett. “Unintelligible early chapters have been sent back several times for rewriting. At last, Rassul has acquired a style with which we do not tamper.” The book, Servant of Sahibs: A Book to be Read Aloud, was finally published in 1923 by Cambridgebased W Heffer & Sons Ltd, with an introduction by Sir Francis Younghusband, then a British army officer who was dispatched by the British India government to gather intelligence on the strategic and trade routes of the Pamirs and Central Asia.

During Galwan’s life, his homeland was part of the famed Silk Route, which was volatile (how some things never change), with different kingdoms and tribes trying to maintain their control over the lucrative paths, swarming with robbers.

Galwan was born in Leh, possibly in 1878. He was raised by his single mother; both of them got by doing menial jobs and household chores for a government official. The book offers early glimpses of his doughty spirit. Once to protest being chided by his mother, he left home for a friend’s house, and walked defiantly for miles in the freezing winter, without shoes.

During those days, Leh, the capital and principal town of Ladakh, was an important hub on the Silk Route, where traders from Kashmir, Punjab, Afghanistan, Tibet, China and Central Asia would congregate and barter their goods — teas to turbans, creams to carpets. The triangular town, situated at an altitude of 13,500 ft above sea level, was a melting pot of various ethnicities.

Petty fights would often break out between them. In one such scuffle, Galwan and his friends were chased through the streets of Leh and were badly beaten by a group of Chinese traders and their aides, according to his autobiography.

As he lay on the ground, Galwan recalled in his book, “I thought: ‘This people will kill to me.’”

Dead Man Walking
The same fear of being killed by the Chinese would be experienced by another member of my family seven decades later. This was when a hail of bullets from the People’s Liberation Army (PLA) rained down on a search party of Indian security forces in October 1959 near the Hot Springs check post near Aksai Chin, close to the Galwan river.

In that patrol party was a 24-year-old recruited by the Intelligence Bureau — my father Abdul Majeed Bailay.

Tensions were brewing between India and China that year. During the 1959 Tibetan Uprising, the Dalai Lama had fled to India in March and India had granted asylum to the Tibetan spiritual leader.

On October 21, one of the three reconnaissance parties that had gone to the Hot Springs area did not return to the base. Sensing something amiss, a search team of about 20 members, comprising Central Reserve Police Force (CRPF) jawans and Intelligence Bureau (IB) men, including my father, went searching. At around noon, when the Indian search party was passing through ravines, looking for their lost colleagues, they were ambushed by the Chinese PLA forces. Bullets and grenades rained down from the PLA vantage on the high ridges. Despite their precarious positions and with their modest firearms, the Indian contingent fought bravely but 10 Indian lives were lost in the incident.

My father was wounded but survived. The survivors were captured by the PLA, which made the hostages carry the bodies of their deceased colleagues back to the Chinese side. For more than a month, they were kept in underground bunkers. With no news from the border, my father was considered dead. My devastated grandmother performed his last rites as per Islamic rituals and local Ladakhi traditions.

Then as part of an agreement after five weeks, China released the hostages and handed over the bodies of Indian jawans who died in the Hot Springs shootout.

On a winter afternoon, children playing at Stalam, near the Leh Palace, saw an approaching party of security forces on horseback. When some of them recognised my father among the soldiers riding the horses, the children were stunned. Old-timers say the children ran scared, shouting, “ghost… ghost”, as he was believed to be dead.

After that episode my father gained some notoriety in Leh as datlok, loose translation for “dead man walking”, in Ladakhi. He married Galwan’s eldest granddaughter (my mother) in the late 1960s.

In 2018, a year before he passed away at the age of 84, my father and three other surviving members of the Hot Springs search party were honoured by Prime Minister Narendra Modi when he inaugurated the renovated National Police Memorial and Museum in New Delhi. The sacrifices made by the brave personnel of CRPF and IB at the Hot Springs in 1959 is remembered every year on October 21, observed as the National Police Commemoration Day.

I grew up hearing the tales of my father’s hostage saga as well as the storied adventures of Galwan. The treks lasted months and ran through dangerous trails in gorges with the ever-present threat of snowstorms. While the European sahibs got mountains named after them, the porters and pony men did the backbreaking work. Poverty and lack of opportunities led many Ladakhi locals to take up dangerous jobs. Tours were so tough that many had to amputate all toes and fingers due to frostbites.

But Galwan’s sacrifices bestowed good fortune on successive generations of his family. As Ladakh over the years became a highlight of the domestic tourism circuit, the land Galwan owned in and around Leh town became prime property and the clan produced a new breed of hoteliers.

Whenever I build a modest hotel on the Galwan land I inherited in Leh, a friend suggested that I should name it after my greatgrandfather. But my uncle already runs an establishment across the road — Galwan Guest House.