MediaTek has just announced two new 5G-compatible chipsets for upcoming phones: The Dimensity 1200 and 1100. Incrementally improving on the prior Dimensity 1000, these new chips pack better A78 cores, hit faster display refresh rates, and they’re built in TSMC’s newer 6nm node. Mediatek hopes they’ll end up in your next phone — assuming you can live without mmWave 5G and can stomach the wait.

First, let’s pull down the specs for both:

The Dimensity 1100 and 1200 are very similar, but the 1200 has a “prime”-type core with a higher clock rate, supports higher resolution cameras, and can reach a higher maximum refresh rate for supported displays. There’s also a 10% performance difference we’re told in the APU between the two, and though precise GPU specifications weren’t available, the Dimensity 1100 will hit a slightly lower framerate than its bigger brother in identical situations.

Excluding those differences, you can pretty much talk about these two chips as if they were the same. That includes being built to TSMC’s newer and more dense 6nm node, the octa-core configuration of four A78s paired with four A55s, the ARM G77 MC9 GPU, support for UFS 3.1 2-lane storage, Wi-Fi 6, Bluetooth 5.2, and even AV1 hardware decode (which first debuted on the Dimensity 1000 as one of the first chips to support the feature). 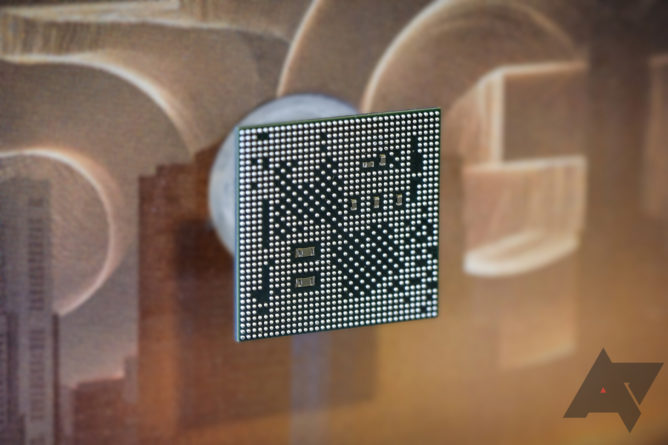 Though the Dimensity 1200 has a higher-clocked prime core, we’re told the company intentionally didn’t include one of those new substantially bigger and faster X1 cores, as Qualcomm did on the Snapdragon 888 — we assume to hit a more competitive price point. Battery life was also a primary consideration for the new chips, which could have made a difference.

While it’s easy to discuss pure paper metrics, when it comes to modern heterogeneous compute workflows and things like the DSP and nebulous AI-powered workflows, it’s harder to present as a nice concise list with numbers. MediaTek tells us that some of the changes in this chip to things like its APU and “HyperEngine” optimizations help with things like mobile gaming by enhancing touch response, maintaining multiple data connections while gaming, and bring new features like multi-person software bokeh, AI noise reduction, AI panorama night shots, and AI SDR to HDR conversion. We’re even told there’s ray tracing support, but before you get too excited, it’s just software-based — literally any computer can do that, and performance will be not great.

Mediatek tells us the first phones with these chips will show up earlier than you might expect, starting in late Q1 and early Q2, though folks in the US will have to wait until later this year. If it’s anything like last year, that could mean September or later.

On paper, this doesn’t exactly bring the heat against Qualcomm’s latest flagship hardware, but it’s unlikely MediaTek is targeting the same segment. Last year’s Dimensity ended up in devices you might expect to see a Qualcomm 600 or 700-series chip in. The T-Mobile LG Velvet with a Dimensity 1000C is just under $400, for example. Looking at the Snapdragon 765/765G strikes a much closer and more curious comparison. As usual, we’ll have to wait and see how these latest chips actually perform before we come to any real judgment, but MediaTek has been been pulling ahead recently, outselling Qualcomm in the overall smartphone chipset market this last quarter.

HSINCHU, Taiwan – Jan. 20, 2021 – MediaTek today unveiled its new Dimensity 1200 and Dimensity
1100 5G smartphone chipsets with unrivaled AI, camera and multimedia features for powerful 5G
experiences. The addition of the 6nm Dimensity 1200 and 1100 chipsets to MediaTek’s 5G portfolio
gives device makers a growing suite of options to design highly capable 5G smartphones with top of the
line camera features, graphics, connectivity enhancements and more.
“MediaTek continues to expand its 5G portfolio with highly integrated solutions for a range of devices
from the high-end to the mid-tier,” said JC Hsu, Corporate Vice President and General Manager of
MediaTek’s Wireless Communications Business Unit. “Our new Dimensity 1200 stands out with its
impressive 200MP camera support and advanced AI capabilities, in addition to its innovative
connectivity, display, audio and gaming enhancements.”
Key features of MediaTek Dimensity 1200 and 1100 5G chipsets include:

Dimensity 1200 has already received TÜV Rheinland certification for its 5G performance, with tests
covering 72 real-world scenarios. The certification verifies that the chipset provides reliable, high performance 5G connectivity and offers users high-quality 5G experiences across a wide variety of
scenarios.
The first devices with the new MediaTek Dimensity 1200 and 1100 chipsets are expected to hit the
market at the end of Q1 and beginning of Q2 this year.
For full specifications and further details on MediaTek Dimensity 1200 and 1100, please visit:
https://i.mediatek.com/mediatek-5g
###