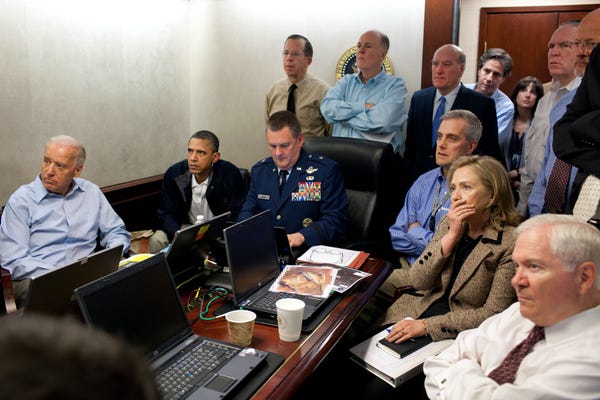 Retired US Navy Adm. William McRaven, the former head of US Special Operations Command, said Tuesday that the Osama bin Laden conspiracy theory that President Donald Trump boosted on Twitter last week was as crazy as denying the moon landing.

Last Tuesday, Trump retweeted a post from a since-suspended account that was spreading a baseless QAnon conspiracy theory that bin Laden is still alive and that former President Barack Obama and Vice President Joe Biden staged his killing and possibly had SEAL Team 6 killed to cover it up.

Amid significant criticism, the president defended his retweet Thursday at a Town Hall led by NBC’s Samantha Guthrie, saying it was just a retweet. “That was an opinion of somebody,” Trump said. “I’ll put it out there. People can decide for themselves.”

McRaven, a former Navy SEAL who oversaw the bin Laden raid, kept his thoughts on the unfounded conspiracy theory to himself until CNN’s Jake Tapper asked him about it Tuesday.

“I didn’t even think it was worth addressing because it was so crazy. It was a little bit like denying the moon landing,” he said, characterizing the conspiracy theory Trump retweeted as far “off in left field.”

McRaven said that he was pleased to see that Robert O’Neill, a former Navy SEAL and member of SEAL Team 6 who is thought to have shot bin Laden, spoke out against the conspiracy theory, making it clear that not only did the US military get bin Laden but that the men who went on the mission risked their lives to do so.

Responding to the president’s retweet of the bin Laden conspiracy theory, O’Neill tweeted last Tuesday: “Very brave men said [goodbye] to their kids to go kill Osama bin Laden. We were given the order by President Obama. It was not a body double. Thank you Mr. President.”

McRaven told CNN’s Tapper that Trump was disrespecting service members like O’Neill who participated in the raid to take down bin Laden by boosting “crazy” conspiracy theories.

“By being so dismissive, by promoting this crazy conspiracy theory, you really disrespected those guys that went on the mission, and frankly, I’d offer, a lot of people within the special operations and conventional forces that have been fighting this hard war for a long time,” he said.

The president has floated a number of unfounded conspiracy theories and scientifically dubious claims in the past, including during his 2016 presidential campaign.

More recently, Trump pitched the unsupported idea that his Democratic opponent Joe Biden was taking performance-enhancing drugs in order to get him to the election finish line by November. He has called for Biden to take a drug test.

McRaven has been a measured but outspoken critic of Trump and his administration. Throughout Trump’s presidency, he has identified administration policy decisions he considers disastrous and accused the commander-in-chief of failing to display leadership in a time of urgent need.

In an opinion column titled “Our Republic Is Under Attack From the President” that was published in the New York Times in October 2019, McRaven wrote that Trump was gutting the country of the “nation’s principles.”

In another article published in The Washington Post in 2018, McRaven wrote: “A good leader sets the example for others to follow.”

“Your leadership, however, has shown little of these qualities,” McRaven added. “Through your actions, you have embarrassed us in the eyes of our children, humiliated us on the world stage and, worst of all, divided us as a nation.”

McRaven said in an op-ed for The Wall Street Journal that he voted for Biden in the upcoming presidential election.

The retired Navy SEAL held a number of important leadership positions within the special operations community during his nearly four decades in the service, including overseeing the successful Operation Neptune Spear raid in 2011 that killed al Qaeda leader Osama bin Laden.

After retiring in 2014, he went into academia and has written several books on his experiences as a Navy SEAL.

These new Samsung Q soundbars are a Dolby Atmo...