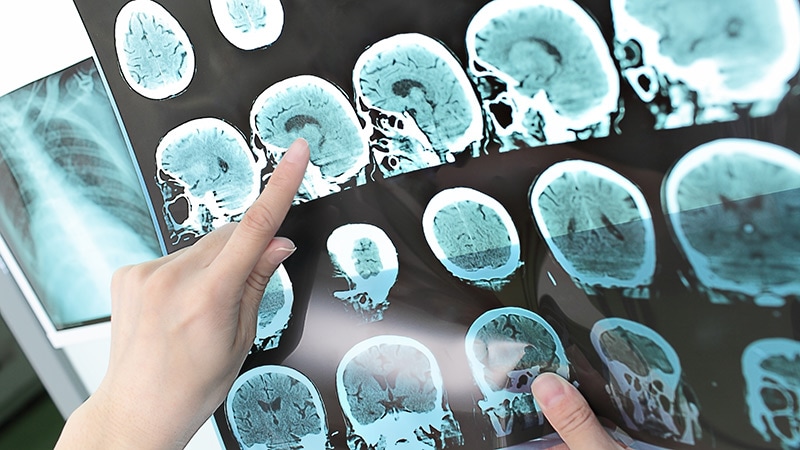 The investigational drug, masitinib (AB Science), which has a completely new mechanism of action for multiple sclerosis (MS), has shown a positive result in slowing disability in patients with primary progressive and secondary progressive forms of the disease and no signs of active inflammation in a phase 2b/3 study.

“This is the first time that we have seen significant activity in slowing disability in a population of nonactive primary progressive and secondary progressive MS,” lead investigator, Patrick Vermersch, MD, commented to Medscape Medical News. “There are no drugs available for these patients, which make up the vast majority of progressive MS patients, so these results are impressive. They are definitely a big deal.”

This study, known as AB07002, demonstrated a sustained and significant benefit for masitinib at a dose of 4.5 mg/kg/day in Expanded Disability Status Scale (EDSS) score change over 2 years vs placebo, with a 37% reduction in 3-month confirmed disability progression. This change “is relevant from a medical standpoint,” Vermersch reported.

However, a second dosing schedule, in which the drug was titrated up to 6 mg/kg/day, did not show significant benefit. Vermersch said this was because of an unexpected improvement in EDSS score in the placebo group.

In the 4.5-mg/kg group, the benefit was demonstrated across a broad population, with no difference with regard to age, duration of disease, or baseline disability. The benefits were similar in both primary and secondary MS phenotypes and were present irrespective of baseline active inflammation status.

“Masitinib addresses the huge unmet need in progressive MS,” he told Medscape Medical News. “The drugs currently used in MS target B cells and T cells. They are immunomodulating drugs and are used for relapsing remitting MS. But in progressive forms of the disease, there is a strong involvement of innate immunity, so to be effective we need drugs that target this part of the immune system.”

Innate immunity is a major part of the immune system in primates; it is related to the immune cells inside tissues and the central nervous system (CNS) and is separate from adaptive peripheral immunity, he explained.

Masitinib is a novel drug for MS in that it inhibits tyrosine kinase and blocks the activity of immune cells involved in the innate immune system — mainly microglia and mast cells. “Both of these types of cells are very involved in progressive MS. Masitinib has no action against T or B cells. It is a small molecule and penetrates the CNS,” Vermersch noted.

“This has opened up a whole new area of opportunity to develop treatments for progressive MS,” he added.

“We showed a positive significant result in slowing disability in patients with nonactive progressive MS,” he said. “The term ‘nonactive’ is important. Some other drugs (ocrelizumab and siponimod) have shown some modest activity in slowing progressive forms of MS, but this is driven by patients with some degree of inflammatory activity at baseline. Our study excluded such patients.”

The inclusion criteria were patients with primary progressive or secondary progressive MS without relapse (as measured by EDSS progression) within the previous 2 years.

“No patients were enrolled who had superimposed relapses during the previous 2 years,” Vermersch stressed.

Baseline EDSS score was 5.0, and patients had an average disease duration of 15 years. Mean age was 50 years.

The primary endpoint was change from baseline in absolute EDSS value, which was measured every 12 weeks throughout the study, averaged over the 2-year study period (mean change in EDSS score).

Results in the 4.5-mg/kg group showed a mean increase in EDSS score in the masitinib recipients of 0.001 versus 0.098 in the placebo group, giving a mean difference of –0.097 for masitinib (P = .025). The results were similar in patients with primary or secondary progressive MS.

Masitinib also showed a 98% reduction in the risk of reaching an EDSS score of 7, corresponding to disability severe enough that the patient is restricted to a wheelchair (hazard ratio, 0.02; P = .009).

In terms of safety in the 4.5-mg/kg group, the most common adverse events were rash (1,5%) gastrointestinal (GI) disturbances (1%), neutropenia (1%), and edema (1%). “We had a couple of patients with skin reactions and neutropenia, but all adverse events were mild to moderate and very manageable,” Vermersch commented.

He showed just one slide on the subset who were titrated up 6 mg/kg.

“Numerically the change in EDSS was comparable in the 6-mg/kg titrated group as it was in the 4.5-mg/kg group; however, the placebo arm of the 6-mg/kg subset unusually showed an improvement relative to baseline after 96 weeks. The placebo group of the 4.5-mg/kg cohort was consistent with the literature and expected worsening in EDSS score over 96 weeks,” Vermersch reported.

No new safety signal was observed in the 6-mg/kg cohort. Only the 4.5-mg/kg cohort will be pursued in further trials in MS.

Vermersch noted that masitinib is also being investigated in other indications and “there are thousands of patient years of experience which show reassuring safety data.”

“There is some GI disturbances and skin reactions, but a very small percentage of patients discontinue treatment. If the drug is titrated slowly there are fewer adverse effects,” he said. “We will do that in the next study.”

A second confirmatory study is now being planned. The trial will enroll around 700 patients and is expected to recruit quickly because there is such a big unmet need, Vermersch added.

“Masitinib is a new drug for MS with a completely novel mechanism of action targeting the innate immune system”, he said. “The study had several innovative features in that it combined primary and secondary progressive MS patients and measured disability in a different way to what we are used to.”

“It did show a slowing of disability, which is great news as we don’t have any drugs for these patients at the moment, so this is a very hopeful result,” Cohen said.