MagSafe for the Android masses 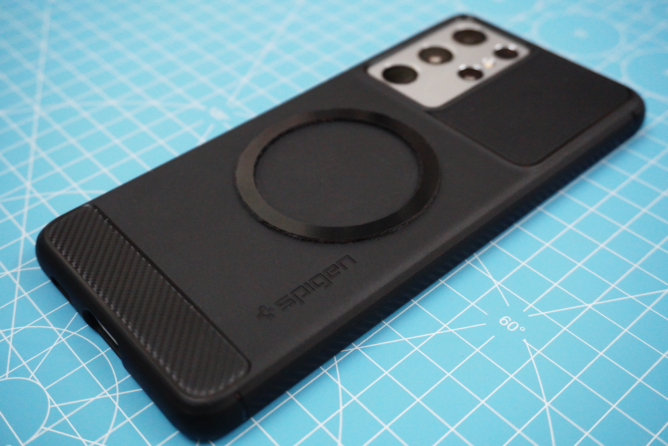 When Apple announced MagSafe for the iPhone 12 range, I hoped someone would find a way to make it work with Android devices. MagSafe allows you to magnetically attach various accessories to the back of a compatible phone, including wireless chargers, battery packs, wallets, and car mounts. After using Mophie’s MagSafe adapter with my S21 Ultra for a few weeks, I must say I’m impressed.

The Snap adapter is the key to the Mophie take on MagSafe. It sticks to either your phone or phone case. Mophie says that it should work through thin cases, but I haven’t found any that do, including Samsung’s own silicon cover. This means I had to put it on the outside surface of my case, but I don’t mind too much. The adapter is slim, so I barely notice it’s there. The magnets are strong, too, and I don’t have any concerns about anything falling off.

Each Snap product comes with one adapter, or you can buy them separately in a two-pack for $20

This is the product I wanted to try the most. The Juice Pack Mini is a 5,000mAh battery pack that can wirelessly charge any Qi device at 12W. It uses the MagSafe ring to stick to the back of your phone to ensure a good connection while charging. There’s also a USB-C port for charging a second phone and recharging the pack itself. I was hoping I could recharge the pack wirelessly too, but sadly that isn’t an option.

5,000mAh isn’t a bad size, especially when it needs to be light enough to hold comfortably. That’s the same size as the battery in my S21 Ultra itself, so with the inefficiency of wireless charging, it can get my phone from 0% to 80-85%. That charging won’t be very fast, though.12W isn’t much lower than the 15W my S21 can reach, but I question whether it’s reaching 12W at any point. My S21 can charge from 50-100% in about an hour when using a regular 15W charger, but the Juice Pack took over two hours to do the same.

Ultimately that leads to a trade-off. A regular battery pack will charge your device quicker but is less portable and requires a cable. The Juice Pack is the opposite, charging slowly while being easy to carry.

My S21 Ultra is already a heavy phone, and slapping a 5,000mAh battery on the back makes the situation worse. If you have larger hands, then the weight should be the only issue. The phone is certainly more awkward to hold with the Juice Pack attached, but it’s manageable, and it’s still more convenient than having a cable running to your bag or pocket.

Mophie has a larger 10,000mAh version planned for later this year, featuring 10W wireless charging, a built-in kickstand, and a tripod mount. Even though it’ll probably be massive and charges even slower than this one, I’m looking forward to trying it.

The Juice Pack Mini is $50, which is a little steep but worth it for the convenience. The larger Powerstation Stand will be available later this year for $70.

This is a more conventional MagSafe product. It’s basically a Mophie version of Apple’s MagSafe charger, offering 15W speeds. I’ve enjoyed using this charger a lot, keeping it in my living room to top my phone up in the evening while spending time with my family. The advantage over a regular wireless charger is that should you need to pick the phone up and use it; it’ll stay attached and keep charging

Finally, we have two vent mounts, one of which comes with wireless charging. The standard mount is simple. Fit it to your dashboard and stick your MagSafe-equipped phone to it.

The one with wireless charging is more interesting. In the box, you get the same Snap+ Wireless Charger we just talked about, along with a vent holder that it clips into and a 20W USB-C car charger.

Both of these work well. They hold onto the vents with a strong grip, and the magnets are good enough that I have no worries about my phone falling off when hitting a pothole. It’s great to see a car charger that delivers on the promised speeds as well. My S21 Ultra charges wirelessly at 15W in the mount, but if I use a USB-C cable to plug it right into the car charger, it hits an even faster 20W.

The regular Vent Mount is $30, while the wireless version is $50. The wireless version offers better value—it’s just the Snap+ wireless charger attached to a vent, so you can take it with you and plug it into a wall for convenient desk or bed stand charging.

Overall I’m impressed with the Snap range. The Juice Pack is my favorite so far, and I look forward to seeing what Mophie adds to the lineup in the future. You can check out everything the company has to offer on its website.