LUMI light-up keyboard is like ‘Guitar Hero’ for piano 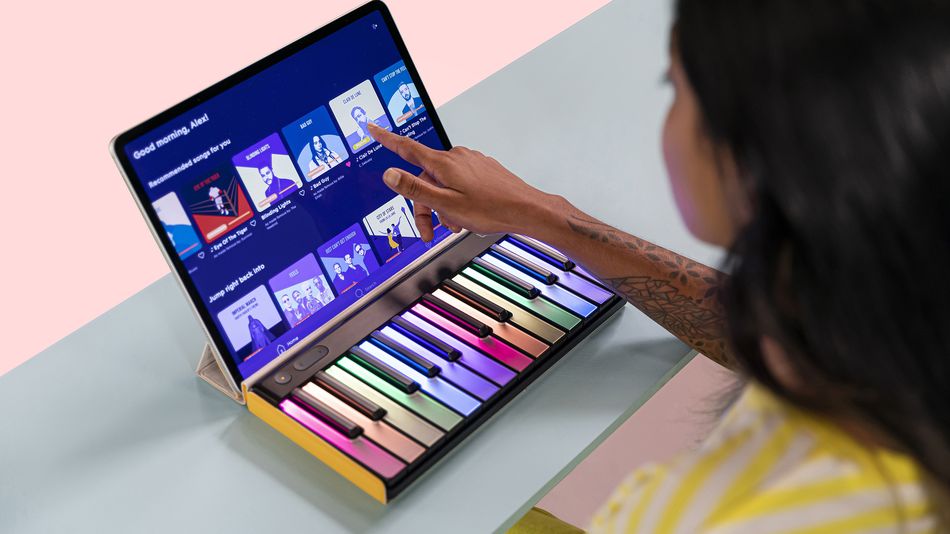 Like so many parents, I have fantasies of my children mastering musical instruments, even though my own musical talents are limited at best and memories of my short-lived piano lessons still fill me with a slight sense of dread.

My two older children, ages 7 and 10, have a couple of years of piano under their belts, but stopped when their lessons ended at the start of the pandemic last March. Even before the shutdowns, it had become a fight to get them to go to weekly lessons, a battle I’d rather not pay to have.

This is why I was intrigued by , a portable, colorful keyboard and app that teaches kids the basics of piano, and then some. I thought the LUMI’s colorful, light-up keys and the option to learn visually or using notes would appeal to the kids.

LUMI Keys is an engaging piece of kit that has the whole family wanting to learning piano skills, and with built-in lessons, it’s something the kids can do anytime, anywhere

What is LUMI Keys?

Initially launched as a Kickstarter campaign in 2019, the premise of LUMI Keys is that you learn to play songs as you go, so the process of mastering an instrument becomes enjoyable instead of frustrating.

LUMI Keys is essentially an all-in-one piano keyboard, and tutor. It connects to a LUMI app, which has interactive lessons and a content library. The song catalog features everything from kids’ favorites like Twinkle Twinkle Little Star, Old MacDonald Had a Farm and Chopsticks, to Beyoncé and Ed Sheeran hits.

The LUMI Essential app comes with 40 songs and in-app lessons. Access to the full LUMI Premium library (£29 with the current bundle deal) puts hundreds of pop and classic songs, new lessons, and monthly updates at your fingertips.

The LUMI keyboard is completely illuminated, with a different color representing each key. It grabs the attention of a user immediately and playing it is a visual, technicolor delight.

“We did this deliberately because most people’s hands are not quite the right size for standard piano keys, which were made for 18th century European male concert pianists and have never changed size,” explains LUMI’s director of marketing and communications, Will MacNamara.

A standard piano keys’ weight and feel will also be different – these don’t feel weighted at all – and if you want to be playing more sophisticated pieces using both hands, you’ll want to invest in another LUMI keyboard.

How does it work?

First, download the LUMI app to your smartphone or tablet (the device doesn’t include one; you’ll need to use your own), and it will sync with the keyboard when you’re ready to practice. You can play chords and scales, or try beginner lessons, which include an interactive video tutorial with a teacher and plenty of opportunities to practice, plus challenges where you can earn points.

Points help to gamify the process, encouraging users to practice and keeping players motivated. Points are also essential in telling you how well you’ve mastered a song – score well enough to “pass” or you’ll have to repeat it.

Once you’ve completed 20 beginner lessons (which only add up to 30 minutes), there are another 44 lessons across three hours which expand your knowledge to an intermediate and advanced level, introducing concepts like quarter notes and showing you how to use both hands to play.

Compared to most initial piano lessons, where children are told where middle C is and shown a few notes in a music book, there is an almost indescribable joy in the freedom that learning piano with the LUMI provides. After only a few minutes you can be playing bits of songs,  like Pachelbel’s “Canon” and the “Overture” from Carmen, without knowing a single piano note, or having any sense of where to put your hands, or even needing to use more than one finger. This makes it immensely satisfying for kids especially, who get the instant gratification of producing music, without the stress of trying to remember which finger goes where and which note comes next.

The creators of LUMI say it’s designed to reinforce skills children learn on the piano and to teach them complementary ones.

“It’s set up to provide an easy transition to advanced-beginner or lower-intermediate piano lessons. Hand position, technique, notes, keys, chords, one-handed and two-handed playing, muscle memory in playing songs at tempo: These skills are all learnable on LUMI and fully transferable to a more standard piano,” explains MacNamara.

The LUMI also helps kids visualize concepts like scales and chords, which are taught in a more abstract, theory-based way in traditional piano lessons.

LUMI players have the opportunity to view their screen in a few different ways – one of the most innovative and interesting things we’ve enjoyed about it.

There’s Cascade View, with video-game style rainbow rectangles gliding up and down the screen (reminiscent of Guitar Hero) – you don’t need to know how to read music to play like this. Same goes for Rainbow View, with rainbow shapes along horizontal lines on the musical staff (each note is labelled to help children remember which one is which).

ColorNote View features a five-line staff with colored notes, while Classic View is your basic sheet music mode. The LUMI even lights up in black and white instead of rainbow shades when you’re playing in this mode.

Whether you think of it as a toy or a teaching tool, LUMI is a really fun addition to any household. It’s been the most in-demand item in our home these past few weeks.

My seven-year-old has been using it the most, and is essentially teaching herself to play piano on it. While she previously disliked traditional piano lessons, the independence and playfulness the LUMI affords suits her really well. She’s even been translating her skills onto an actual keyboard, and she’s able to recall notes she didn’t know before.

With extra-curricular activities currently on hold and a staggered school schedule that gives her a late start, the LUMI has been her morning ritual. Interestingly, both she and my five-year-old, who can also more or less manage the early LUMI lessons on her own once I’ve set her up on the device, both remarked how “it’s good for being calm.”

Even my three-year-old has attempted it, tapping away on each rainbow color and giggling merrily.

While a LUMI is a piece of kit that the kids will be excited about in our current stay-at-home climate, I can also see it being really useful on trips and vacations. Don’t worry, like any electric keyboard, you can plug in headphones.

The economy is heating up again and it’s goo...

How Marty Baron and Jeff Bezos Remade The Wash...

7 emotional moments from Netflix's 'Fate: The ...