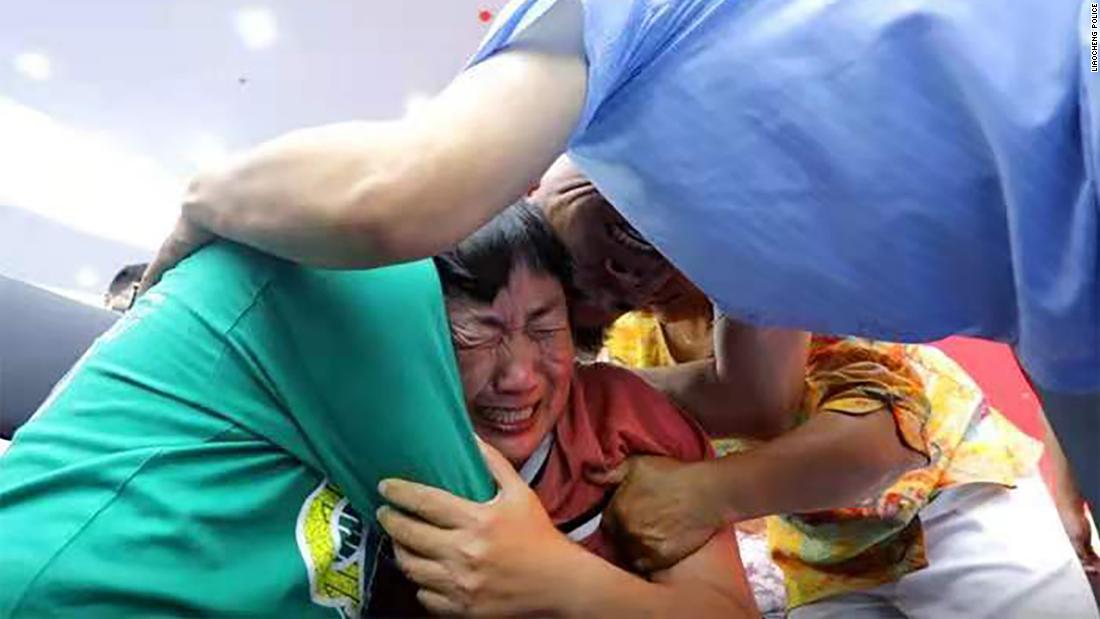 But this week — 24 years after his disappearance — the search for Guo finally came to an end.

Police in Liaocheng City, Shandong province, said Monday they had found Guo, now an adult living in neighboring Henan province — and had reunited him with his parents. Video footage of the reunion on Sunday, released by police, shows the family in tears and embracing tightly, crying out, “We found you, you’ve come back.”

Police said they had arrested two people who confessed to kidnapping and trafficking Guo.

Guo had been abducted near his home by an unfamiliar woman, his parents told police in 1997. Authorities collected blood, DNA samples and other evidence — but with limited technology at the time, the case remained unsolved, the police said on their official social media account on Tuesday.

The case was never closed, and police say they continued investigating throughout the 24 years.

Guo Xinzhen’s father, Guo Gangtang, never stopped looking, either. After his son went missing, he embarked on a search across China, riding a motorbike through nearly all of the vast country’s provinces, covering 500,000 kilometers (310,685 miles), according to state-run news agency Xinhua.

He carried little with him except a bag full of fliers, and a flag emblazoned with a picture of his son. He used up all his savings and racked up staggering debts, burning through 10 motorcycles on his long journey, Xinhua reported.

Gangtang couldn’t find his son — but managed to help track down more than 100 other abducted children and reunite them with their families, according to Xinhua.

This year, authorities hit upon a new lead. Using the latest technology including DNA analysis and facial feature comparison, the Ministry of Public Security found a potential match in Henan — and when officers tracked the man down, DNA testing confirmed that it was the missing Guo Xinzhen.

Police detained a suspected child trafficker identified only as Hu, and his ex-girlfriend identified as Tang, according to the police’s social media post. The two confessed after interrogation, saying Tang had abducted Guo Xinzhen in 1997. She then met up with Hu, and the then-couple took a bus back to Henan, where they sold the child.

It is unclear who Guo Xinzhen was sold to, and no further details of his upbringing were provided by police.

Child abduction and trafficking has long been a rampant problem in China, with many parents never finding their missing children. Activists and experts say the problem was exacerbated by China’s one-child policy, which has been relaxed in recent years. In May, the government announced it would begin allowing couples to have up to three children.
But for decades, because of the strict policy and China’s patriarchal society, it was common for couples to desire a boy — driving a black market for trafficked infant boys, while girls are often sold to foreign adoptive parents, falsely labeled as orphans.
It’s not clear how many children go missing in China every year, though estimates go up to tens of thousands. China is ranked Tier 3 by the US State Department’s anti-trafficking agency — the lowest level, meaning the government “does not fully meet the minimum standards for the elimination of trafficking.”
Since the turn of the century, the government has stepped up efforts to curb the problem, including launching a national DNA database in 2009 and an online anti-trafficking platform in 2016. These have helped authorities track down more than 4,700 missing children in the past five years, according to Xinhua.