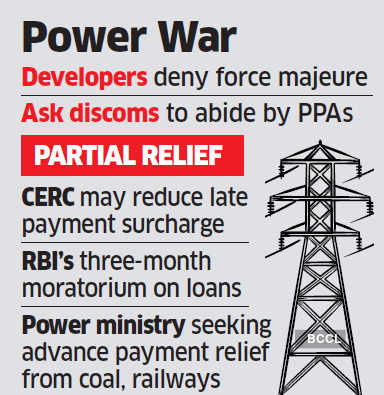 The troubled power sector will be mired in a new set of legal cases if the issue is not amicably resolved.

The Central Electricity Regulatory Commission (CERC) is expected to issue an order that might reduce the late payment surcharge payable by discoms to power projects.

Last week, the power ministry announced it would direct the regulator to give a three-month moratorium to make payments to generating companies and transmission licensees and not to levy penal rates of late payment surcharge. The three-month moratorium provision, however, was not mentioned in the Centre’s directive under section 107 of Electricity Act to CERC.

ET reported on Wednesday that panic-stricken thermal power producers have rushed to the government seeking immediate help as states have started invoking the force majeure clause in their contracts to ask projects to shut down because of low demand, and some are not paying even fixed costs during the period.

Industry sources said BSES discoms in the national capital are the latest to invoke force majeure clause backed by an approval from Delhi power regulator, which has directed the companies to maintain steady power supply.

Discoms of states like Madhya Pradesh, Telangana, Punjab, Haryana and Uttar Pradesh have also invoked force majeure event as per their power purchase agreements (PPAs) with many power plants citing reduction of electricity demand due to nationwide lockdown to prevent the spread of Covid-19. They have told many power plants that their electricity will not be scheduled and the projects should stop declaring availability of electricity. Some have denied the power companies of fixed costs during the lockdown period.

Companies are taking legal opinions on the letters that have been issued to them by the discoms.

“The power purchase agreements, which have been signed between discoms and power plants, have to be the guiding force in all circumstances. Discoms cannot claim force majeure since the projects are operational and are willing to supply power. We will reply to the letters sent by discoms to our plants,” said a developer who did not wish to be identified.

An executive with another power company said the lockdown had not affected the distribution companies’ ability to offtake electricity or the power projects’ generation capacity. “Based on the government’s memorandum invoking force majeure under public procurement contracts or the home ministry’s order citing lockdown, discoms cannot claim force majeure,” he said.