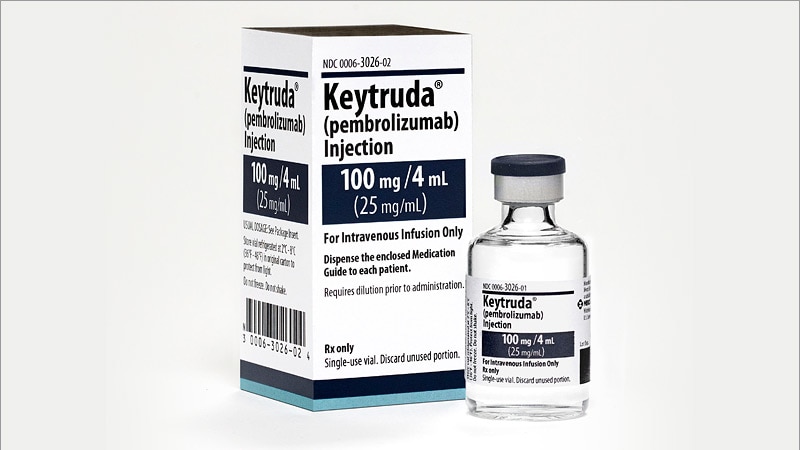 The Food and Drug Administration has approved pembrolizumab (Keytruda) monotherapy for locally advanced cutaneous squamous cell carcinoma (cSCC) that can’t be cured by surgery or radiation.

The July 6 approval for the programmed death–1 inhibitor follows a June FDA approval for pembrolizumab monotherapy in patients with recurrent or metastatic cSCC disease not curable by surgery or radiation. Both approvals, pembrolizumab’s first for cSCC, are based on findings from the second interim analysis of the phase 2, multicenter, open-label KEYNOTE-629 trial.

Patients in the KEYNOTE-629 trial received pembrolizumab at a dose of 200 mg IV every 3 weeks for 24 months or until documented disease progression or unacceptable toxicity.

Adverse reactions occurring in patients with recurrent or metastatic cSCC or locally advanced cSCC in KEYNOTE-629 were similar to those observed in patients with melanoma or non–small cell lung cancer who were treated with pembrolizumab monotherapy in previous trials.

The checkpoint inhibitor can cause immune-mediated adverse reactions, which may be severe or fatal, according to Merck, the drug’s manufacturer. The reactions can occur in any organ system or tissue and can affect more than one body system simultaneously.

“Immune-mediated adverse reactions can occur at any time during or after treatment with Keytruda, including pneumonitis, colitis, hepatitis, endocrinopathies, nephritis, dermatologic reactions, solid organ transplant rejection, and complications of allogeneic hematopoietic stem cell transplantation,” Merck explained in a press release, noting that “early identification and management of immune-mediated adverse reactions are essential to ensure safe use of Keytruda.”

Depending on the severity of any reaction, treatment should be withheld or permanently discontinued, and corticosteroids administered if appropriate, Merck stated.