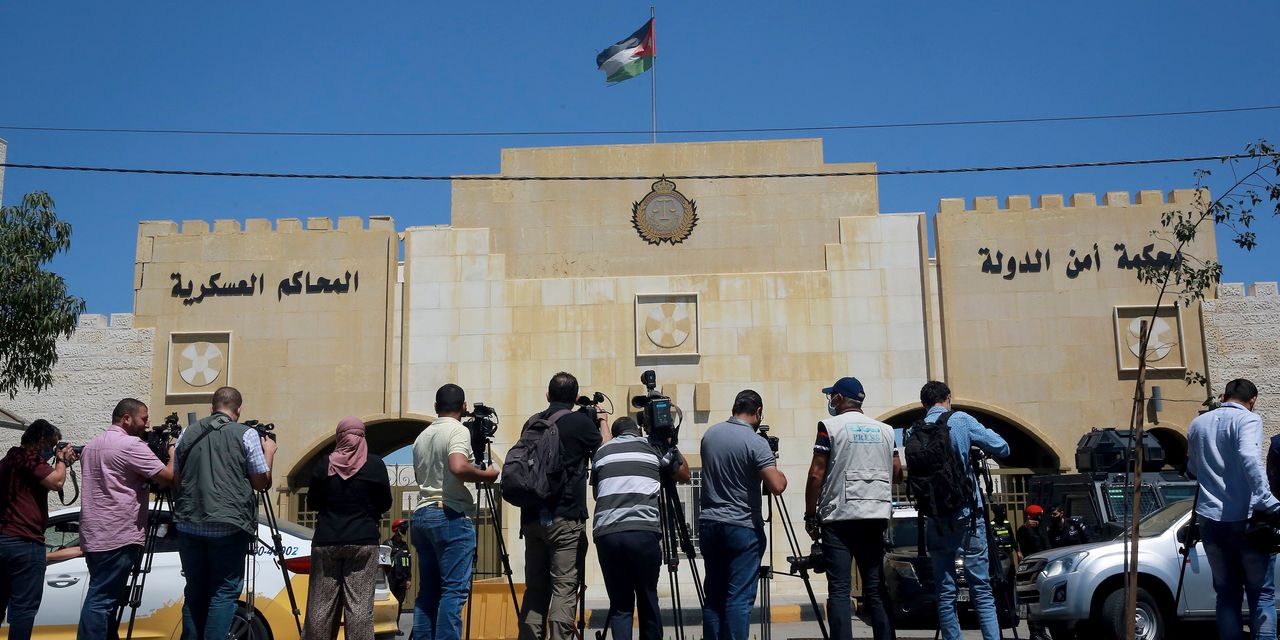 A public rift between Jordan’s King

and his younger half-brother entered a new stage, as two of the prince’s alleged co-conspirators appeared in court for the first time to face charges of sedition over their involvement in a purported plot to replace the monarch.

In a remarkable scene Monday at the state security court in Amman that was closed to the public, former royal court chief

appeared handcuffed and wearing blue prison uniforms, according to their lawyers. Authorities say both were working on behalf of Prince

Mr. Awadallah, who developed ties to Saudi Arabia after leaving the Jordanian government over a decade ago, and Sharif Hassan face charges of sedition and incitement to oppose the political system, according to the indictment that was reviewed by The Wall Street Journal. They could face 20 years in prison if found guilty.

said that the trial had been adjourned until Tuesday and would likely take more than two months.

After a four-hour session in which the court heard from two witnesses, online video showed two black SUVs speeding away from the courthouse.

Prince Hamzah, whom King Abdullah removed as crown prince in 2004, has denied wrongdoing and isn’t on trial. But he is mentioned extensively in the indictment and could be called to testify.

Confrontation between King Abdullah and Prince Hamzah burst into the open in April, upending politics in Jordan and shaking the image of the U.S. ally as an island of stability in the turbulent Middle East. The government has characterized actions by Prince Hamzah and others as a plot to undermine stability by fanning discontent in an effort to rise to power.

American interests in the Middle East rely on stability in Jordan, which borders Israel and the occupied West Bank, Saudi Arabia, Iraq and Syria. The kingdom collaborates on counterterrorism efforts with the U.S., which came out in strong support of King Abdullah in April. The king is expected to visit Washington in the coming weeks, his first trip during the Biden administration.

Following family mediation, Prince Hamzah signed a letter expressing support for the king and his son, the current crown prince.

The state security prosecutor alleges that Prince Hamzah wanted to use Mr. Awadallah’s international connections to secure Saudi support to take power in Jordan, though the authorities have offered no evidence publicly to support that claim.

Riyadh has previously denied any involvement in the alleged plot and expressed support for King Abdullah. People familiar with the matter said it unsuccessfully sought Mr. Awadallah’s extradition back in April. Riyadh has denied it had asked Amman to return him.

The indictment includes alleged conversations between the defendants and Prince Hamzah it says were obtained through a wiretap. Unauthenticated recordings leaked in recent days to media outlets seen as close to Jordan’s security establishment purport to be the evidence of those contacts.

Prince Hamzah’s mother, American-born Queen Noor, blasted the purported recordings, tweeting over the weekend that they were “character assassination of an honorable and patriotic Hashemite Jordanian by a media disinformation campaign.”