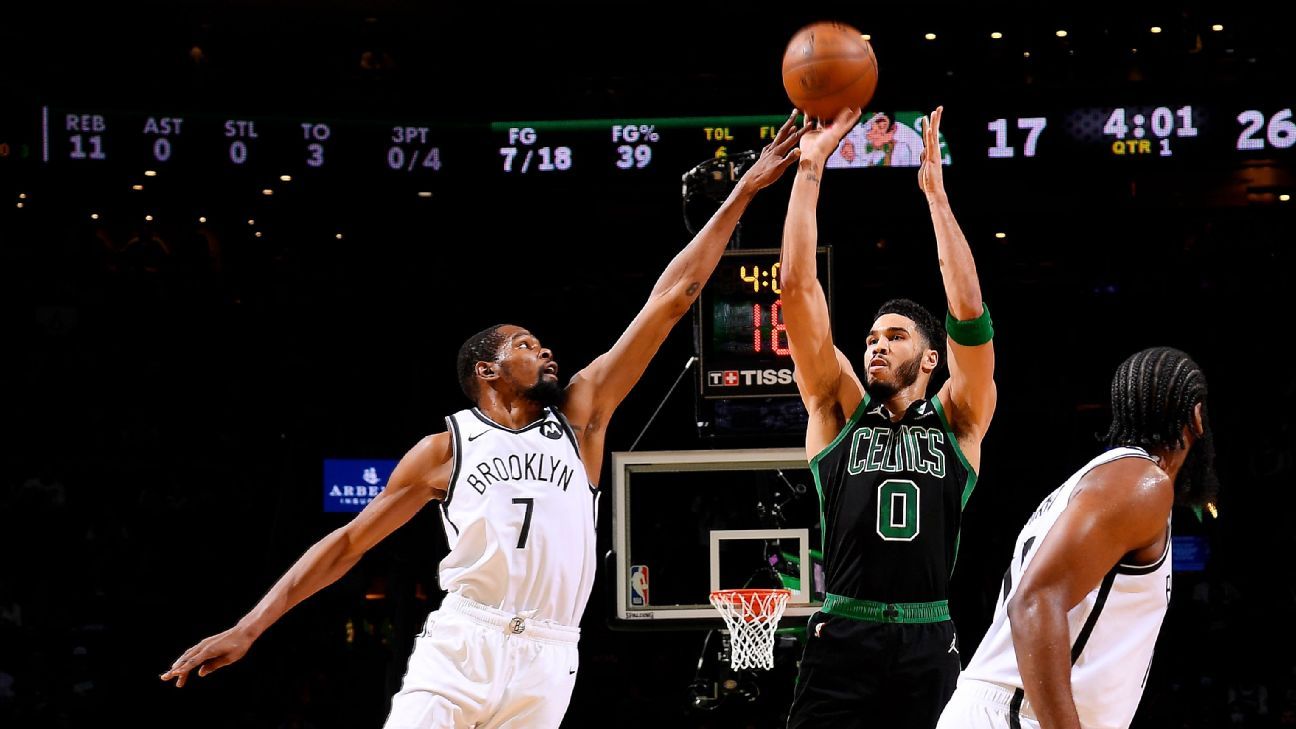 BOSTON — Every one of the 4,789 fans who entered TD Garden on Friday night came ready to boo Kyrie Irving until their voices were hoarse. But after the Boston Celtics came away with a stunning 125-119 victory over the Brooklyn Nets in Game 3 of their first-round playoff series, those same fans were doing something very different when they left: chanting Jayson Tatum‘s name.

Tatum scored 50 points for the second straight game in this building to go along with six rebounds and seven assists in 41 minutes. It was a spectacular performance that was enough to overcome his old teammate Irving, as well as Brooklyn’s former MVPs, Kevin Durant and James Harden, to drag the Celtics back into this series.

“It’s just one of those nights,” Tatum said. “Trying to protect home court, trying to get a win at all costs.

Given that Tatum has scored at least 50 points four times in two months after never having done so in his four-year NBA career, perhaps he can say with a straight face it was “just one of those nights” and believe it.

But few players can say they can go toe-to-toe with Harden and Durant and come out on top. That is exactly what Tatum did, including the shot that got him to 50 points, a jumper over Durant with 41.8 seconds to go that gave Boston a seven-point lead and all but assured the Celtics would get themselves back into this series.

“Just make a play,” said Tatum, who before Friday night had scored a combined 31 points through the first two games — both Celtics losses — and left Game 2 in the third quarter after Durant accidentally poked him in the eye. “Obviously, I know I had it going but just trying to see where the help was, somebody was coming, find an open man. In those situations, just make the right play.”

While the attention after the game was centered on Tatum’s performance, before the game it was all on Irving, who was making his first appearance in Boston with fans in this building since leaving the Celtics in free agency two years ago. He made his first appearance on the court with just over eight minutes to go on the pregame clock ahead of Friday night’s tip and immediately received a loud chorus of boos from the few thousand fans in attendance as part of the 25% capacity here at TD Garden, one that will be lifted ahead of Sunday’s Game 4.

“Yeah, we’re expecting a bigger crowd on Sunday,” Irving said. “Happy it was a great start to seeing what this environment’s gonna be like and just looking forward to the challenge.”

While those boos quickly died down, Irving was loudly booed again during player introductions, when his name was called second to last, before Durant and after Harden.

The same thing happened anytime he touched the ball during the game, with raucous cheers following every missed shot by Irving.

“I mean, it’s basketball,” Irving said. “I’ve been in a few environments in my life. So like I said, as long as it’s just strictly the nature of basketball out there, it’s nothing extra. I’m cool with it. Going to get some preparation with the team tomorrow and then get prepared for Sunday, but want to keep it straight basketball.”

Irving had a fabulous season for Brooklyn, becoming one of seven players to shoot 50% from the field, 40% from 3-point range and 90% from the foul line for a full season. But he did plenty of missing in Game 3, finishing with 16 points on 6-for-17 shooting. After going 1-for-5 from the field and scoring just two points in the first half — hitting a pull-up jumper midway through the second quarter over rookie Payton Pritchard — Irving slowly got himself into the game in the second half, with his 3-pointer with 7:35 remaining in the fourth cutting Boston’s lead to 105-97.

But he found himself on the wrong side of several matchups down the stretch defensively, including against Tatum, much to the delight of the hometown fans, as anyone not named Durant or Harden did next to nothing for Brooklyn. Those two combined for 80 points; add in Irving’s 16 points, and the rest of the Nets combined to score 23 on 8-for-25 shooting.

“It was huge,” Celtics guard Marcus Smart said of limiting Brooklyn’s supporting cast. “Those guys hurt us in Game 2 especially. Joe [Harris] went off, I think, hit seven 3s in Game 2, and they fed off that. So for us to be able to come down and just hold them steady and not let them hurt us as well as those guys going off, it was big for us. And for our guys to come in and do exactly what those guys did to us in Game 2, and that’s contributing, both ends of the floor, is exactly what we need and we got to continue that.”

The Boston crowd also took opportunities to let Irving know how it felt about him during a couple of second-half stoppages. After he fouled Smart on a 3-pointer with 5:11 to go in the third, during a review to see if the foul would be deemed a flagrant (it was not), the crowd went into an extended chant of “F— you, Kyrie.”

Then, when Smart and Blake Griffin collided midway through the fourth and Smart needed a moment to collect himself, the crowd yelled, “Kyrie sucks!” throughout the stoppage.

Ultimately, though, this game came down to the play of Tatum.

And while Harden (41 points, seven rebounds and 10 assists) and Durant (39 points and nine rebounds) were typically terrific, Tatum matched the two former league MVPs play for play and shot for shot throughout this game, willing Boston back into this series even while fellow All-Star Jaylen Brown watched from the sideline after undergoing season-ending wrist surgery earlier this month.

“We know what he’s capable of,” Nets coach Steve Nash said. “We did a good job at home, but that’s a job that’s gonna take a lot of resilience and continue to be there to guard him and to make it difficult for him as a group. Put different people on him, be able to support those who need support and be able to lock him up when we have guys that can guard him.”

Tatum had some help, too. Tristan Thompson had his best game as a Celtic, finishing with 19 points and 13 rebounds. Smart went for 23 points and six assists, going 8-for-11 from the field, 5-for-8 from 3-point range and making several key defensive plays. And Evan Fournier finished with 17 points and five rebounds.

“They tied us in 3s,” Durant said. “They hit 16 3s in this building … so they got it going from the 3-point line, which is going to keep any team in the game, and we got to do a better job of contesting.

Brooklyn will get a chance to be better Sunday night and, with it, have a chance to reclaim control of this series. But for one night, at least, Boston was better, thanks to Tatum outdueling Brooklyn’s constellation of stars.

“He’s so advanced for 23 years old,” Celtics coach Brad Stevens said. “I’ve said the word ‘special.’ I don’t say that very often, obviously. He just has a unique ability to score the ball, to slither through seams, to find angles to score, but then also he’s got the vision to make every right read.

“He was super tonight.”