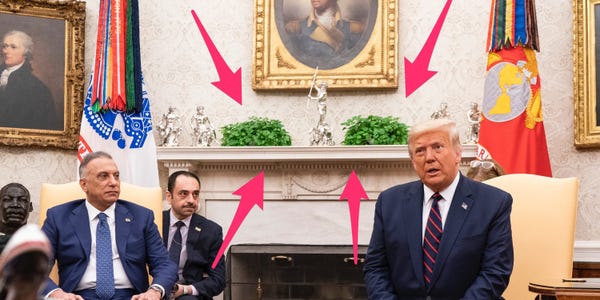 In her speech introducing her father at the Republican National Convention, Ivanka Trump told a story of her son gifting the president a Lego replica of the White House.

“When Jared and I moved with our three children to Washington, we didn’t exactly know what we were in for. But our kids loved it from the start,” the White House presidential adviser said. “My son Joseph promptly built grandpa a Lego replica of the White House. The president still displays it on the mantel in the Oval Office and shows it to world leaders, just so they know he has the greatest grandchildren on earth.”

The story resembles another one Ivanka Trump has told about herself, as Andrea Bernstein, a WNYC reporter,  said on Twitter. According to “American Oligarchs,” a book Bernstein wrote about the Trump and Kushner families, Ivanka said in a 2007 interview with Conan O’Brien that she built a Lego replica of Trump Tower for her dad. She also said her brothers contradicted her, each of them claiming to have built the Lego tower.

Bernstein also said the story was plagiarized from “The Art of the Deal,” President Donald Trump’s bestselling book ghostwritten by Tony Schwartz.

Schwartz told Bernstein that the story was probably made up.

“There is a considerably less than fifty-percent chance that anything like that ever happened,” he told Bernstein, per “American Oligarchs.”

In her 2009 book “The Trump Card,” Ivanka even acknowledged the story was fake.

“The story stands as one of the first and best examples of how we work together as a family,” she wrote.

If the Lego White House is real, where is it?

Recent images of the fireplace mantel in the Oval Office do not show any such Lego set. Here’s one from a week ago, when Trump hung out with Iraqi Prime Minister Mustafa Al-Kadhimi:

Bloomberg News’s White House editor Alex Wayne tweeted that none of his outlet’s reporters have ever seen the Lego White House.

Ivanka has been accused of violating the Hatch Act by speaking at the RNC event hosted on the White House South Lawn. The law bars federal employees, excluding the president and vice president, from engaging in political activities, including campaigning, with federal resources.

Her office told the Associated Press that she had been approved to speak at the convention in her personal capacity as Trump’s daughter rather than her White House advisory role, although she spoke about the Trump administration’s work throughout her speech.

How to know if obesity qualifies you for COVID...