Home > General > Is your Amazon Fire tablet slow? Here’s how to make it faster

Is your Amazon Fire tablet slow? Here’s how to make it faster 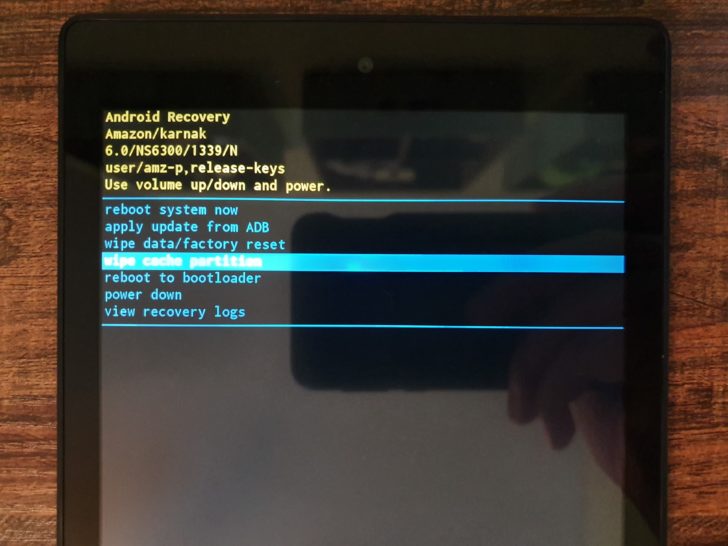 Amazon Fire tablets are very capable devices, with the ability to play games and watch media at incredibly low prices. However, they can be somewhat slow. Most Fire tablets don’t have great hardware to start with, and over time, poorly-optimized applications and leftover junk files can leave you with a slower experience than you started with.

However, there are a few ways you can speed up a Fire tablet. We’re not miracle workers, and these steps won’t turn your tablet into a high-end device, but there’s a good chance you’ll see a noticeable difference in performance afterwards.

The first step towards improving performance on a Fire tablet is wiping the cache partition. If you’re not familiar with it, the cache partition is the space Android gives to apps to store temporary data. It’s normally not necessary to manually wipe this partition, but it does usually make a difference on Fire tablets, especially ones that have been used for a while.

This will not delete any of your files or application data. The cache partition only contains temporary files that are normally deleted automatically.

First, shut down your Fire tablet by holding down the power button. Once it’s off, press down on both the power and volume down buttons. Once you see the Amazon boot logo, you can let go of the power button, but keep holding down on the volume button until you enter the recovery screen (pictured below).

On the recovery screen, scroll through the recovery menu using the volume buttons until “wipe cache partition” is selected, then press the power button to enter. Make sure you don’t select the factory reset option by mistake. You’ll then be asked to confirm your choice.

Once you get kicked back to the recovery screen, scroll down to “power down” and select it. Then hold down the power button again (without holding down any volume buttons) to turn your tablet back on.

This might seem obvious, but it’s worth explicitly mentioning: remove any apps you installed and don’t need anymore. Most of the pre-installed applications can’t be deleted (and disabling them might cause problems), but you can still go through the apps and games you’ve downloaded.

By default, Fire tablets send data about how you use your device back to Amazon. While turning them off won’t result in a noticeable speed boost, there will be fewer services running in the background, and it’s just nice to reduce Amazon’s personal data collection. Here’s where you can find the options:

If you’ve had your Fire tablet for a while, you’ve likely accumulated a lot of junk files — downloads, folders from games you deleted ages ago, and so on. Files by Google is a useful app that can find and clean up junk files, all in a few taps.

While cleaning up unused files doesn’t directly have an impact on performance, Android does start to slow down when you run out of internal storage. Files by Google is great at finding the type of leftover data and junk that can quickly fill up your tablet’s storage.

If you’ve already installed the Google Play Store on your Fire tablet (perhaps with our guide?), you can just download Files by Google from the Play Store. If you don’t have the Play Store, you can still grab the Files app from APKMirror.

Most Fire tablets don’t have much internal space, so many device owners choose to put in a microSD card. Older Fire tablets let you move some apps to the microSD card, but if you have one of the newer models with Android 7.0 Nougat (like the 2019 Fire 7 or 2018 Fire HD 8), you can actually use an SD card as an extension to your internal storage.

As a more extreme example, we also tested an older Class 10 (not A1) microSD card with an 8th-gen Fire HD 8. These are among the lowest-grade SD cards you can still buy, and as you can see in the screenshots below, random read performance was around 6x slower than the internal storage. Random write speeds were unusable, at 35x slower than internal storage.

It’s important to note that SD card speeds don’t matter if you’re only using them for data storage. If you just want to save Netflix movies for offline use, or keep a massive music collection on your tablet, any SD card will do just fine. Running applications directly from an SD card is what will drastically reduce performance.

If you really need the extra storage for apps, get an A2-rated card like this SanDisk model. Your apps will still run slower, but they won’t be as slow as they could be.

Some people have reported that disabling the Alexa voice assistant can help fix performance issues and battery drain, so if you don’t care about Alexa, it’s something you can try. Open the Settings app from the home screen (or swipe down from the top and tap the gear icon), select ‘Alexa’ from the list, and switch Alexa off. Easy.

If you’re still having issues with slowdowns/battery draining, you can try enabling Parental Controls from the Settings app, which prevents Alexa from running at all. I wasn’t able to tell a difference between that and just turning off Alexa normally, but maybe you’ll see different results.

If your Fire tablet is still slow, there’s one more option you can try — Android has a hidden setting for limiting the number of applications that can run in the background. Normally, Android will close background apps when it runs out of available RAM, but you can set it to be more aggressive. This won’t affect push notifications and other tasks that normally stay in the background, only apps you opened and then exited.

Enabling a background process limit can cause some apps to break, and may result in reduced battery life (since apps will have to reload more often). Proceed at your own risk.

Also, this option is not available on secondary profiles on Fire tablets, only the primary user.

First, you need to enable the Developer options menu, if you haven’t already. Open the Settings app, select ‘Device Options,’ and keep tapping ‘Serial number until the ‘You are now a developer’ message appears. A new ‘Developer Options menu will appear in the Device Options section.

Once you get access, open the Settings app, select ‘Device Options,’ tap ‘Developer Options,’ press ‘Background process limit’ (it’s near the bottom), and set it to 2 processes.

Now your Fire tablet will only keep two apps running in the background, at a maximum. If you want to turn this off later, just go back to the option and set it to ‘Standard limit’. The setting is also usually reset after a reboot, so if you notice your tablet becoming slow, check to see if it’s still enabled.

There’s no getting around the bottom-of-the-barrel processors that Amazon puts in its tablets, but hopefully some of these steps helped speed up your tablet a little bit.