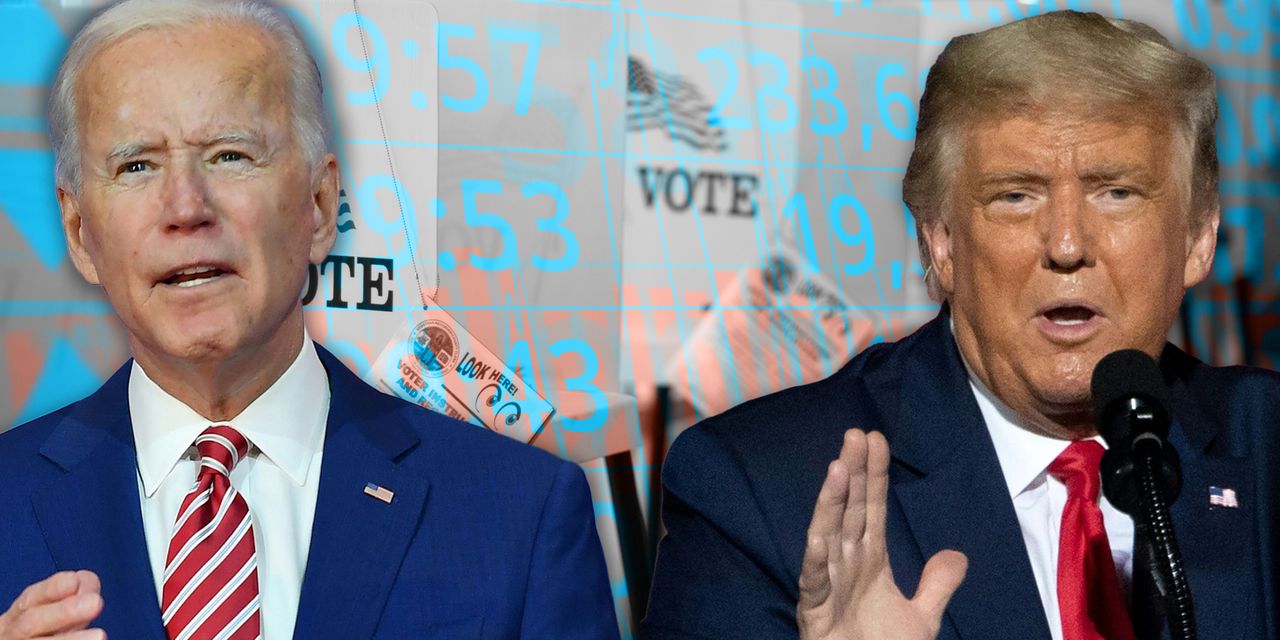 After all, it could be a topsy-turvy week for investors as remaining voters go to the polls on Tuesday, with little certainty over when a victor in one of the most bitter and most litigated presidential elections in U.S. history will be declared.

Here’s a look at what investors in stocks and other assets are bracing for in the electoral aftermath:

The prospect of a more contentious repeat of the drawn-out fight that followed the 2000 presidential election has stock-market investors more worried about a contested outcome than an outright win by either Democratic challenger Joe Biden or President Donald Trump, analysts said.

“A clear victory is most important for this election, with the worst scenario being an unclear outcome and that creates uncertainty,” said Anis Lahlou, chief investment officer of the Aperture European Innovation Fund, in emailed comments.

Biden maintained a lead over Trump in national polls, with a final Wall Street Journal/NBC News survey published Sunday showing the Democrat with a 52%-42% advantage over the incumbent, little changed from mid-October. Polls in battleground states that could determine the outcome in the electoral college continued to favor Biden overall, but have tightened.

rose 0.7%. All three indexes on Friday logged their biggest weekly falls since the depths of the pandemic-induced bear market in March, with weakness tied to worries over the rise in COVID-19 cases in the U.S. and Europe and pre-election jitters.

The fear of uncertainty, analysts said, is reflected in part by elevated volatility measures. The Cboe Options Exchange’s closely followed Volatility Index
VIX,
,
a measure of expected S&P 500 volatility over the coming 30 days, stands at more than 30 versus is long-term average near 19. VIX futures contracts show investors don’t expect volatility to subside right away.

So if a contested outcome is the worst case, what’s the best case?

Since late summer, the market has appeared to respond best to signs of a clear-cut win for Biden accompanied by a Democratic takeover of the Senate, a so-called blue wave scenario, analysts said.

Previously, investors had appeared more wary of a Biden victory, due in part to his pledge to raise the corporate income tax cut delivered by Trump and congressional Republicans in 2017.

It’s that fear of uncertainty that partly explains why investors appeared to warm up to the prospect of a Biden victory, analysts said. Around early September, stocks began to show more positive correlation with Biden’s standing in the polls, a reversal from the earlier pattern, said Eric Lascelles, chief economist at RBC Global Asset Management, in an interview.

The shift also came as congressional wrangling over another round of coronavirus aid spending dragged out on Capitol Hill. While Trump, after initial resistance, subsequently called for a spending package even larger than the $2 trillion plan pushed by House Democrats, the two sides were unable to come to an agreement. And even if they had, opposition by Senate Republicans to another big-ticked round of spending were seen making passage of a large plan unlikely.

Given fears of the renewed spread of the virus would further threaten the economy’s rebound from the pandemic, the focus for investors shifted to stimulus prospects.

The “main” election question for investors “seems to be if federal economic support can arrive in January 2021 and counter the effects of a COVID infection surge,” said Paul Christopher, head of global market strategy at Wells Fargo Investment Institute, in a note late last week.

As a result, investors have appeared to cheer prospects for a blue wave that would see Democrats move to quickly implement a large, multi-trillion-dollar round of aid by early next year.

“A victorious President Trump will be anxious to get the economy moving, and a large stimulus would undoubtedly be central to economic recovery,” said Thomas Block, policy analyst at Fundstrat Global Advisors, in a Monday note.

In that scenario, there would certainly be room for a deal on fiscal stimulus, said James Knightley, chief international economist at ING, in a note.

“However, the Republican party’s reticence to back a package of the magnitude proposed by the House Democrats in recent months means it is likely to be more modest” it would be under a Democratic sweep or a Biden victory that saw Republicans retain control of the Senate, Knightley argued.

But there also are longer term concerns. A Biden victory would see investors paying close attention to plans for corporate tax hikes, with some arguing that increases would likely be delayed until after the virus is under control and the economy is on more solid ground.

In a Trump victory, a pledge to make the corporate tax cut permanent would be viewed as a long term positive.

After all, investors rolled into the 2016 election not only expecting a victory by Hillary Clinton, but that were Trump to pull out a win, it would be bad news for markets given his strident views on several U.S. trade partners and other issues.

Stock-index futures did tank as early results pointed to a Trump victory, but the markets bounced hard before the opening bell and stocks rallied as the focus turned to corporate tax cuts and other business-friendly measures.

That’s why it’s important to take the initial market reaction to the results with a grain of salt, said Solita Marcelli, Americas chief investment officer at UBS Global Wealth Management.

“Beyond overall index levels, it will be important to watch how different indexes are reacting,” she said, including the performance of the small-cap Russell 2000
RUT,

versus the tech-heavy Nasdaq Composite
COMP,
.

“In a blue wave, small and medium-sized firms should fare better on the back of expected fiscal easing,” Marcelli said, in a note.

“Looking through this uncertainty, we continue to favor using pullbacks to put money to work in a disciplined and incremental way,” he wrote.

What about other markets? MarketWatch reporters take a look at what the election results could mean for other assets:

Treasury markets are expected to be among the most volatile for Wall Street as votes stream in from Nov. 3.

On one hand, investors cite the prospects of a clear Biden victory as helping to backstop the U.S. economic recovery. Biden’s ambitious fiscal plans could provide much-needed aid to an economy facing the risk around a worsening pandemic, while boosting inflation expectations that could trigger a selloff in Treasurys, pushing yields, which move in the opposite direction of debt prices, higher.

At the same time, the Federal Reserve’s aggressive monetary policy support has many analysts expecting the central bank to step in if long-term debt yields spiral higher and threaten to throttle the flow of credit.

Market participants aren’t writing off the possibility of a flight to safety after election night, either, if stocks tumble in reaction to an unclear result or other factors. That would push yields down as investors snap up haven assets like government bonds.

Gold may benefit no matter who wins the election.

The best scenario for higher gold prices would be a blue wave, which would be likely to lead to significant stimulus spending and “up front infrastructure” spending to boost the economy, said Ross Norman, chief executive officer of Metals Daily.

The addition of significant debt on top of record debt levels would also be supportive for gold, he said.

Still, a Trump victory would likely “see more of the same” for gold, which has risen around 60% over the course of his term.

Trump’s approach to the energy sector has been dubbed as “friendly” by many analysts, given that he has taken steps to promote U.S. energy independence and ease regulatory restrictions in the market. A win by Trump would “lead to more of the same,” said Stacey Morris, director of research at index provider Alerian.

U.S. oil production touched record levels during Trump’s presidency, but demand has been weak as the COVID-19 pandemic slowed activity around the globe.

If Biden is elected, however, the energy industry may face more restrictions, as the Democrat has said he opposes fracking on federal lands. Those restrictions could lead to higher oil and natural-gas prices if they hurt domestic energy output, said Morris.

Read: Here’s how the U.S. election could shake up the oil market

For one thing, the Federal Reserve has promised to keep buying corporate debt as needed throughout the pandemic, including speculative-grade, or “junk bonds” that recently lost their coveted investment-grade credit ratings. But the central bank’s near-zero interest rate policy also means junk bonds remain one of the few places investors can find yields above 5% in U.S. fixed income.

What’s more, even if Biden wins and raises corporate taxes back to 28% from the Trump administration’s 21%, junk bonds could get a boost.

Here’s how Bruce Monrad, chairman of Northeast Investors Trust sees that scenario playing out. Higher corporate taxes easily could weigh down stock prices, because what “investors are willing to pay for stocks is directly based on future earnings,” he said in a recent note. But junk-bond investors “look at earnings not so much as a tool for pricing securities but to assess whether companies are financially strong enough to meet future obligations.”

And with borrowing rates pegged to stay low, Monrad thinks junk bond defaults are unlikely to spike to anywhere near their 16% default rate during the 2000-2002 “tech wreck” from their current 5%-6% levels heading into year end.

Instead, he sees “equity like” returns in junk bonds with more downside protection than stocks.

The dollar regained some ground in October as stocks faltered, but the ICE U.S. Dollar Index
DXY,
,
a measure of the U.S. currency against six major rivals, remains down more than 2% for the year to date. And dollar bears expect the currency to remain on a weaker path regardless of who comes out on top in the election thanks to interest-rate fundamentals and other factors no longer in the greenback’s favor.

“This year has seen a significant reverse of the sharp move in U.S. real rates that started in 2012/2013 and has been the driver of the dollar’s strength over that period,” wrote Kit Juckes, macro strategist at Société Générale, in a Monday note.

“Whether it’s President Biden or President Trump that leads the U.S. economy forwards from here, the era of dollar strength that came about when the Fed prompted the taper tantrum and the [European Central Bank and Bank of Japan] embarked on the path to massive QE and [negative] rates, is over,” he said.