India’s spending on LAC roads has tripled in 4 years 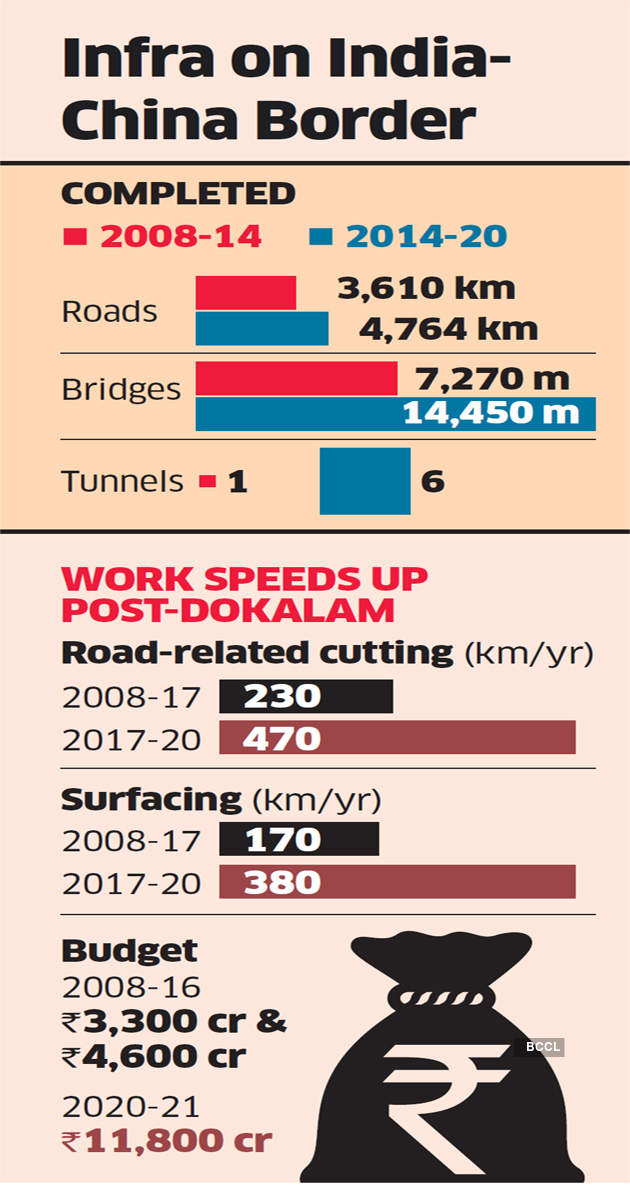 NEW DELHI: India has almost tripled its expenditure on roads along the China border in the past four years compared to what it spent in the decade until 2016, resulting in significant upgrade of roads and bridges which is now at the core of the standoff with China.

Based on the data available with the government, ET has gathered that between 2016 and 2020-21, the allocation for these roads witnessed a sharp increase from about Rs 4,600 crore to Rs 11,800 crore.

This period, officials said, overlaps with the 2013-20 timeframe in which India witnessed a sharp escalation, both in qualitative and quantitative terms, along the LAC. The Depsang, Chumar, Dokalam, Galwan and Pangong Tso incidents may have grabbed the headlines but officials added there were at least 50-60% surge in LAC violations by China in 2018-19.

India’s improvement in road-building efforts to close the gap with China also corresponds with this period. From 2017-20, India has done ‘formation cutting’, which involves fresh alignments and earthworks, at a pace of 470 km per year — double that of the 230 km a year being maintained in the decade until 2017.

This holds true for almost all other aspects like tunnels. Similarly, the length of bridges built have also doubled.

This activity has received considerable political thrust, which began by a blanket general environment approval in July 2014 for construction of roads within 100-km aerial distance from LAC. Though states eventually operationalised the clearance on the ground, the go-ahead from the Centre was a big signal.

Besides this, the DG, Border Road Organisation, primarily responsible for the construction of these roads, was given special powers to procure modern equipment. BRO has deployed snow cutters, heavy excavators, heavy duty rock drills, soil stabilisation and new surfacing technology.

Among the strategic projects, India is about to complete the Se La tunnel in Arunachal Pradesh. Once completed, the tunnel will ensure swift and fast movement of troops in Tawang, a strategically-located district near the China border.

In Ladakh, the 255 kilometre Darbuk-Shyok-Daulat Beg Oldie (DSDBO) road — the main worry for China — is complete, barring a few details. Some of the finished roads include the stretch connecting Sasoma and Saseria in the Ladakh sector, Ghatibagarh-Lipulekh in the Mansarovar sector, Gunji-Kutti-Jollingkong in Uttarakhand and Dokalam in Sikkim.

After the Dokalam standoff, a House panel report said: “The committee is perturbed to note that despite a marked progress in recent years, the road infrastructure on the India-China border is grossly inadequate.”