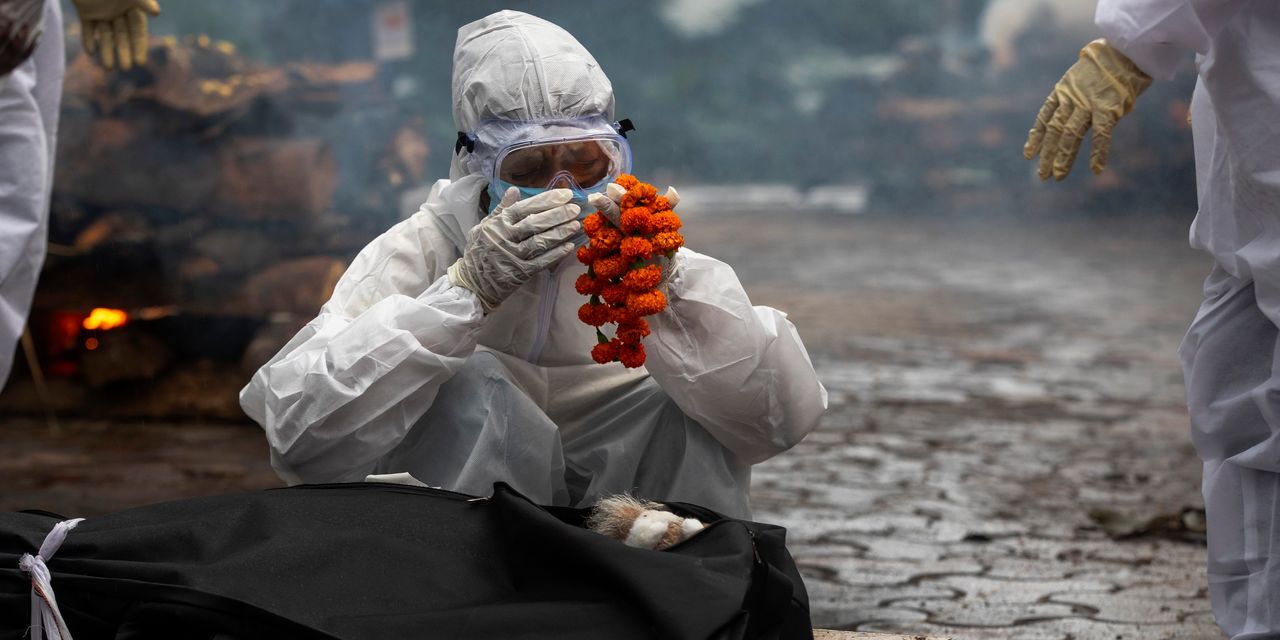 NEW DELHI—The true tally of Covid-19 deaths in India following a devastating spring surge is likely close to 10 times higher than the country’s official count, marking the pandemic as one of the worst tragedies to ever hit the South Asian nation, according to a new study.

India has officially recorded more than 414,000 coronavirus deaths, but scientists and researchers have said that number undercounts the real toll. When India’s cases peaked in April and May, hospitals across the country were forced to turn away patients who later died at home, often untested.

The study pegged excess deaths—or the number of people who died beyond what is normally expected—at between 3.4 million and 4.7 million from January 2020 to June 2021, according to the report released Tuesday from

a former chief economic adviser for the Indian government, and researchers at the Center for Global Development and Harvard University.

One estimate in the study pegged Covid-19 deaths at about four million, roughly 10 times the official count. “True deaths are likely to be in the several millions, not hundreds of thousands, making this arguably India’s worst human tragedy since partition and independence,” the report said.

The study was based on three data sources: deaths from several states logged into the country’s civil registration system, blood tests that show antibodies for the virus in India along with fatality rates in other countries, and a nationwide household survey that is conducted three times a year.

Researchers said that estimating Covid-19 deaths with confidence may prove elusive. But all estimates, they noted, put the true toll of the pandemic at many times higher than the official death count.

Researchers also said that as many as two million deaths occurred before the surge in April and May. The fatalities were spread over a longer stretch of time, which muted the apparent severity. Failing to understand the scale of death, the report said, may have “bred the collective complacency that led to the horrors of the second wave.”

The undercounting of infections and deaths is a problem world-wide, even in countries with widespread testing. The World Health Organization said in May that the global Covid-19 death toll could be two or three times the official number. The problem, however, is particularly acute in the developing world, where access to healthcare and coronavirus testing is often more limited.

Health experts point to a number of issues that have led to widespread undercounting in India. One is that hospitals were turning patients away in April and May as the rapid rise in cases overwhelmed the healthcare system. That left many people to die at home without being tested for Covid-19.

Many Indians were reluctant to report loved ones had died from Covid-19 because they feared being shunned by their neighbors or community, said Dr. Amir Ullah Khan, research director at the Centre for Development Policy and Practice, a thank tank based in Hyderabad. He said some governments and hospitals were also pressured to underreport Covid-19 deaths.

Some states, under pressure from courts or public backlash, have raised their death tolls in the past few months, including Bihar and Maharashtra.

Dr. Khan said the report’s findings mirror what his researchers found when they went to funeral homes and crematoriums throughout the pandemic. The number of bodies was about 10 times higher than the official government tallies, he said.

Underestimating the true toll of Covid-19 in India is important to understanding the virulence of new variants, including the Delta variant, which was first identified in India last year and amplified the recent surge, health experts said. Delta is fueling a surge of cases in the U.K. and has become the dominant strain in the U.S.

India’s vast population of more than 1.3 billion makes it especially ripe for developing new variants. Scientists have been warning about the potential for another wave, as many people have already dropped social distancing and the wearing of masks in recent weeks.

About two-thirds of Indians have antibodies against the virus, according to a separate study released Tuesday by the Indian Council of Medical Research. But that leaves about 400 million people still vulnerable to the coronavirus. About 6% of the population is fully vaccinated.