How to Cook Dried Chickpeas 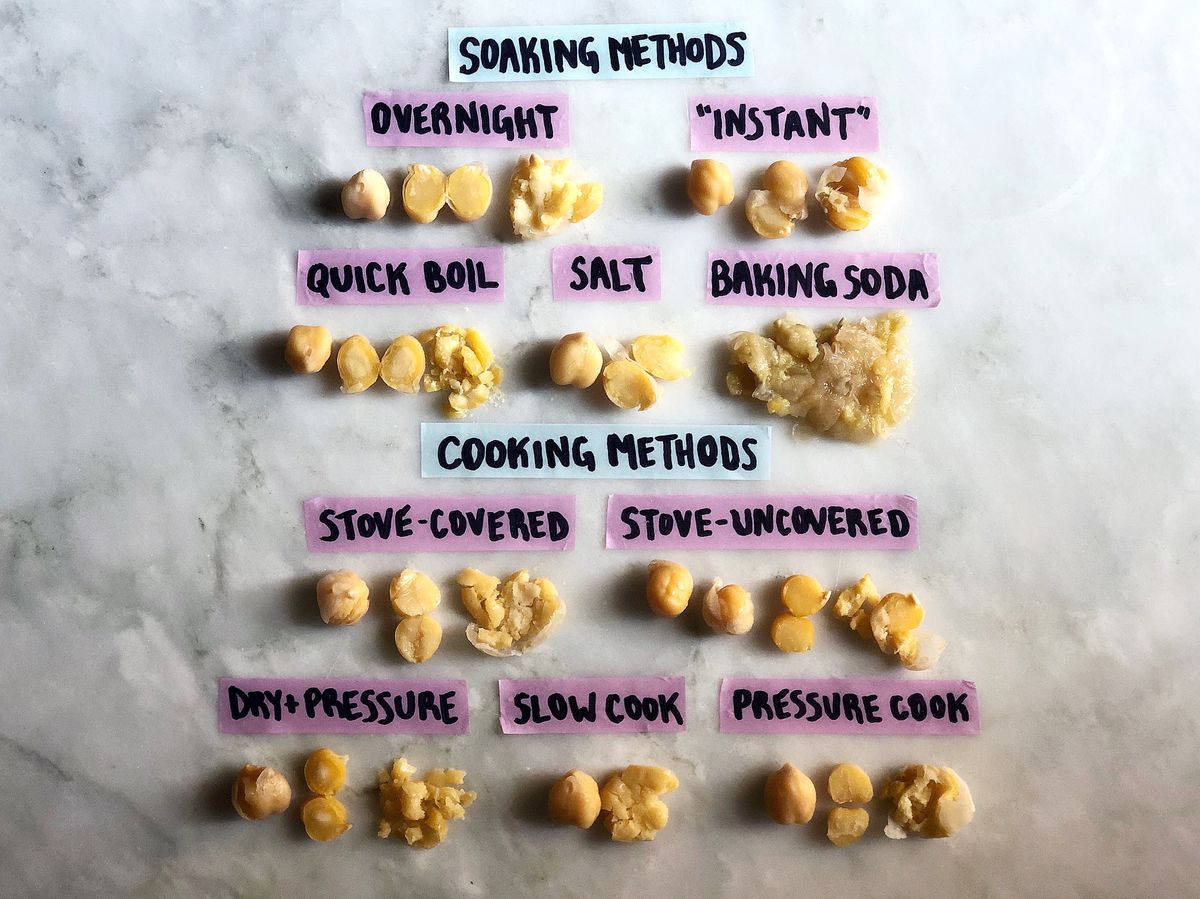 Dried legumes have long eluded me. Don’t ask about the time I tried to boil bulk bin–black beans for nearly eight hours, until I gave up on using them for anything other than gravel.

But chickpeas are the exception. Creamy and tender, this versatile ingredient never disappoints, whether blended into hummus, simmered in chana masala, or crisped under the broiler and consumed at cocktail hour.

For me, the appeal of dried ones cannot be overstated. At a time when virtually nothing is in my control, and the amount of stuff I’d like to have in my control is virtually everything, the ability to fine-tune the internal texture and flavor of a small bean far outpaces the convenience of a can.

That said, I have yet to nail down a meticulous chickpea protocol. In the past, I’ve oscillated between a thoughtful overnight soak, and panic-soaking for only a couple hours; I’ve turned to a saucepan and water, and I’ve also broken out my pressure cooker. In an effort to further limit the scope of chaos, I set out to find a favorite formula once and for all, by pitting various soaking and cooking methods against one another.

The Absolute Best Way to Cook Chicken Breasts, According to 28 Tests

The Absolute Best Way to Cook Bacon, According to So Many Tests

Each trial consisted of 1/2 cup of dried chickpeas, plus 1/2 of teaspoon kosher salt in the cooking stage. All “overnight” soaking was 12 hours. I inspected each group of cooked chickpeas for flavor, texture, and ease of skin removal for all those silky hummus fans out there. You’re out there, right? All batches were photographed on my nightstand, which still smells like chickpeas, thanks for your concern.

I compared each soaking method by using the same cooking method: Drain the soaked chickpeas, rinse, cover with 2 cups of water, and cook for 14 minutes at high pressure in an Instant Pot.

The appealingly titled “quick boil,” a method gleaned from Bon Appétit and proudly named in my kitchen, consists of covering your chickpeas with a few inches of water in a saucepan, bringing to a boil, then cutting the flame, covering the pan, and letting sit for at least 30 minutes (I did about 45 minutes).

The resulting garbanzos weren’t quite as soft or salty as any of the overnight-soaked batches after 14 minutes at high pressure, though they were more thoroughly cooked and slightly saltier than the “instant soak” guys. I’d attempt this again, but with a longer cook time and extra seasoning.

I was immediately intrigued when I came across a method for soaking chickpeas in haste within this recipe for chana masala. The mechanics are similar to the “quick boil” with a few tweaks: You essentially pour boiling water onto the dried chickpeas in a ratio of six (water) to one (chickpeas), then let everything sit, covered, for one hour before draining and proceeding.

At first glance, these chickpeas didn’t look much different than they did pre-soak—but they softened quite a bit after their Instant Pot jaunt. If I dabbled with this soak method again, I’d experiment with adding at least another 10 minutes to the cook time, maybe more. Most still had some dry crunchiness in the center. Also of note: The skins didn’t come off quite as easily as with some other batches.

Cover 1/2 cup of chickpeas with several cups of water in a large bowl, and let sit for 12 hours.

The overnight-soaked chickpeas turned out firm to the touch, but soft to the teeth. They were neither particularly silky nor smushy, just standard garbanzo-at-a-salad-bar texture. Their color remained more beige than than the fawny yellow of some other batches. No skins self-shed while in the pressure cooker, but they were perfectly easy to remove by hand.

Cover 1/2 cup of chickpeas with several cups of water in a large bowl, add a heaping teaspoon of salt, and let sit for 12 hours. The argument behind adding salt to your soaking liquid, according to The Wimpy Vegetarian, is that it “promotes a consistent cooked bean texture surpassing either pre-soaking without salt or skipping the pre-soak step.”

The texture of these chickpeas was subtly, barely different than that of the unsalted overnight-soaked batch. The salted overnight-soaked garbanzos were a bit grainier, as if more eroded, at their surface, but had a deliciously salty flavor the whole way through, which no one complained about. (I was alone, and I did not complain about it.)

Chickpea “Tuna” Salad is Not Tuna, But No One is Mad

Cover 1/2 cup of chickpeas with several cups of water in a large bowl, add 1/2 teaspoon of baking soda, and let sit for 12 hours. Many guides will tell you that adding a teaspoon or so of baking soda to soaking water will aid with the softening of dried chickpeas.

When I opened the pressure cooker lid, it looked like a spoiled teen who has a walk-in closet full of stuff they hate threw a tantrum in there. After poking through several inches of murky foam above the cooking liquid—and I will state for the record, I’m sure I rinsed the chickpeas after soaking—I got to a layer of completely obliterated legumes, all mush and detached skin. After some follow-up research, I learned from The Bean Institute (!!! applying for a job ASAP) that adding baking soda to the cooking water cuts the cook time in about half, so I suspect some similar effect occurred when soaking, resulting in the chickpeas softening extremely quickly.

Based on the soaking test results, each cooking method—with the exception of the unsoaked pressure cooker batch, of course—started with chickpeas that had soaked for 12 hours with no salt or baking soda added to the soaking liquid, as a control.

I conducted both the stovetop, covered and stovetop, uncovered trials simultaneously, and was flummoxed by the subtle differences in the final products, insofar as one can be flummoxed hours into a chickpea cooking marathon. The covered batch somehow ended up less salty than the uncovered batch, but with skins that were much easier to remove. Texturally, the covered chickpeas were a hair silkier, whereas the uncovered ones were starchier, like tiny mashed potatoes.

This is the same exact trial as the additive-free overnight-soaked chickpeas, with the same results: slightly firmer, but still soft enough, chickpeas that were more oatmeal in tone than some of the other specimens, and a little less salty.

This batch produced inconsistently cooked chickpeas, some soft with their skins already slipping off like a too-loose party dress, and others still tough in the center, nothing at all like a bean at a party. The salt seemed to permeate these chickpeas less than in other batches, as if it took all of their energy to simply hydrate.

While I wouldn’t describe this method as efficient, the resulting garbanzos were pleasantly smashable, somewhere between the two stovetop batches in texture. Like the overnight-soaked chickpeas cooked in the Instant Pot, they were paler and less yellow in tone, with skins that couldn’t wait to pop right off.

The Absolute Best Way to Cook Pasta, According to Too Many Tests

The Absolute Best Way to Make Pesto, According to So Many Tests

There are several excellent ways to cook chickpeas, from stovetop to Instant Pot—just don’t skimp on the soaking. (Or, if you do, be prepared to make up for it with extra cooking time, and a more taxing skin-removal process, if skinless chickpeas are your thing.)

If you’re all about seasoning permeation, consider salting your soaking liquid. Or, if you forget to brine, try the stovetop, uncovered method.

For the most efficient cook method, toss your soaked chickpeas into a pressure cooker. (If you like them especially soft, scale up from 14 minutes, to 15 to 16 minutes at high pressure.)

If you prefer a low nuisance, all-afternoon simmer, break out your slow cooker.

What should Ella test next? Let us know in the comments, or send her a message here.

How to Forage for Chanterelle Mushrooms...