Home > General > How the COVID-19 pandemic has impacted smartphone sales

How the COVID-19 pandemic has impacted smartphone sales 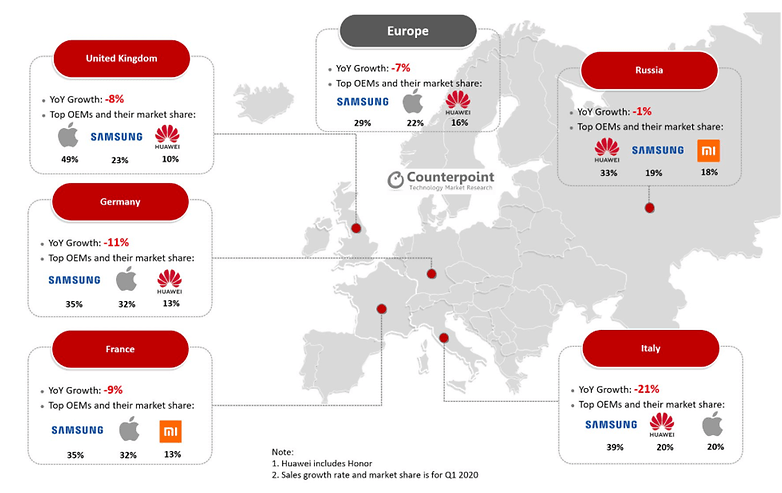 The smartphone market is in crisis. In the first quarter of 2020, there was a drastic drop in smartphone sales, where the COVID-19 pandemic certainly had a role in the decline. In fact, the impact of the coronavirus was studied in recent research that covered smartphone markets in Europe and France.

The Counterpoint Research Institute published an article on Wednesday, June 3, where this new study concerning the sales of the smartphone market in Q1 2020. It was already known that the worldwide smartphone market was already in crisis, as indicated in a previous study by the Strategy Analytics firm in a report last May. It pointed out that the industry sold 275 million units worldwide, which is a 17% drop in sales compared to the corresponding quarter the year before.

In this new study from Counterpoint Research Institute, it provides us with far more precise figures concerning the European market as well as the situation in France. We thus learned that the smartphone market in France showed a negative growth of -9% against -13% in Germany and -21% in Italy. The difference is not that jarring, but the decline does remain above the European average of -7%.

The traditional top 3 smartphone manufacturers maintained their respective positions in the European market, with Samsung staying steady in the lead, ahead of Apple and followed by Huawei. The situation in France, on the other hand, saw Huawei lose their podium finish with Xiaomi replacing them in third place, although the group continues to do extremely well in its home country, China. According to Peter Richardson, who co-directed the Counterpoint study, “Huawei experienced a serious 43% decline in the first quarter of 2020 compared to last year as US sanctions continue.”

“Xiaomi has benefited most from Huawei’s decline with a 145% growth in Q1 2020 compared to the same period in 2019, capturing 11% market share (Editor’s note: 13% in France).” Xiaomi remains the only manufacturer to record significant positive growth in Q1 2020.

This overall decrease of -7% in market growth at the European level may seem rather limited. But this is a so-called “year-over-year” or YoY decline, when one compares the results in Q1 2020 to those in Q1 2019. The first quarter has traditionally been a quiet period for the market.

However, the Covid-19 outbreak has seriously exacerbated the phenomenon. If we were to compare the figures from Q1 2020 to Q4 2019, the period prior to the health crisis and the halt of production chains as well as the closure of stores, the decrease is not a mere -7% but a whopping -23%: which is more than triple.

While there is always the suspicion that some manufacturers might be suspected of brandishing the coronavirus as a magical excuse for poor results, the direct effect that Covid-19 has had on the industry as highlighted in this study is now beyond doubt.