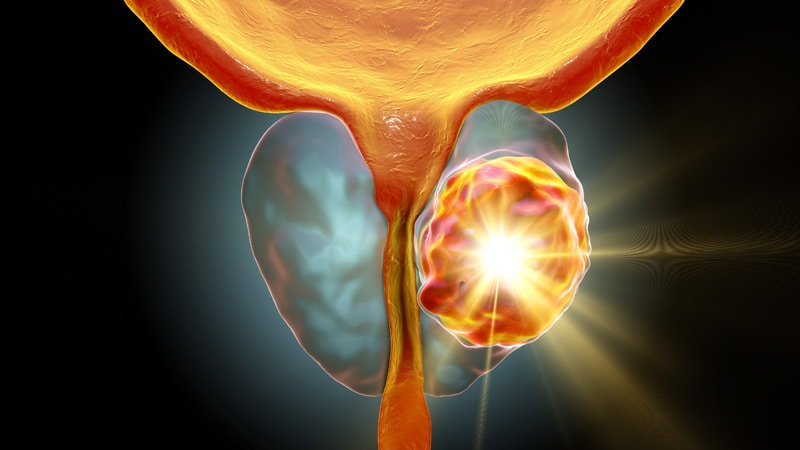 Most men who undergo radical prostatectomy can skip adjuvant radiotherapy and can be followed with observation alone. They can undergo early salvage radiotherapy if the disease shows sign of progressing, say experts reporting results from three similar clinical trials.

This approach would allow most men to avoid radiotherapy and its side effects altogether, the investigators emphasize.

The studies were published online September 28 in The Lancet and The Lancet Oncology.

“There is a strong case now that observation should be the standard approach after surgery and [that] radiotherapy should only be used if the cancer comes back,” commented Chris Parker, MD, the Royal Marsden NHS Foundation Trust and the Institute of Cancer Research, London, United Kingdom.

“Results suggest that radiotherapy is equally effective whether it is given to all men shortly after surgery or given later to those men with recurrent disease,” he said in a statement.

Despite a number of limitations to each of the studies, they represent “an important step forward” and support the use of early salvage radiotherapy for many patients following radical prostatectomy, write experts in an accompanying comment. The editorialists are Derya Tilki, MD, University Hospital Hamburg-Eppendorf, Hamburg, Germany, and Anthony D’Amico, MD, Brigham and Women’s Hospital and the Dana Farber Cancer Institute, Boston, Massachusetts.

However, the editorialists question whether the results apply to all men who have undergone a radical prostatectomy.

One possible exception are men at high risk for progression, such as patients with a Gleason score of 8 to 10 or whose tumor is of grade pT3b or higher. Such patients made up fewer than 20% of participants in the three clinical trials. For high-risk patients, the editorialists think it would be “prudent” to consider adjuvant radiotherapy rather than early salvage therapy.

The RADICALS-RT trial involved 1396 patients who were followed for a median of 4.9 years. Participants had to have at least one risk factor for biochemical progression. These factors included disease of pathologic T-stage 3 or 4, a Gleason score of 7 to 10, positive margins, or a preoperative prostate-specific antigen (PSA) level ≥10 ng/mL.

Half of the men were randomly assigned to receive adjuvant radiotherapy (delivered within 6 months of study enrollment for 90% of patients). One quarter of this group also received either neoadjuvant or adjuvant hormone therapy, the investigators note.

The other half were followed with observation and received salvage radiotherapy group only if they showed biochemical progression within 8 years following randomization.

There was also a small but significant worsening of urinary and bowel function with adjuvant radiotherapy 1 year after study enrollment, although there was no difference at later points of assessment.

The primary outcome measure in the RADICALS-RT trial will be freedom from distant metastases, so the authors caution that additional follow-up is needed to assess the long-term outcomes of the two treatment approaches.

The investigators will also assess the effect of treating men with hormone therapy after surgery along with radiotherapy, which may delay disease progression.

Given the fact that adjuvant radiotherapy increased the risk for both urinary and bowel morbidity and in the absence of any evidence that the adjuvant radiotherapy approach does more good than harm, “observation with salvage treatment for PSA biochemical progression should be the current standard of care after radical prostatectomy,” the study authors conclude.

Safe for All Men?

However, editorialists Tilki and D’Amico question whether this conclusion is generalizable to all men with localized or locally advanced prostate cancer following up-front surgery.

They note that “the patient eligibility criteria for RADICALS-RT included patients who would not receive adjuvant radiotherapy in typical clinical practice because of the low risk of recurrence.”

For example, a patient with pT2 disease, a Gleason score of 3 + 4, a PSA of 4 ng/mL, and negative margins would have been eligible to participate in RADICALS-RT. But the editorialists maintain that “most urological, medical, and radiation oncologists would not recommend adjuvant radiotherapy for such a patient.”

They also point out that any potential benefit of adjuvant radiotherapy would likely to have been diluted by including so many patients with a favorable risk profile.

On the other hand, with regard to patients who are at high risk for progression, Tilki and D’Amico note that the trial might be underpowered to assess any potential difference between the two treatment approaches, even with further follow-up.

One of the other studies published at the same time is the French GETUG-AFU 17 trial, which included 424 men with localized adenocarcinoma of the prostate following radical prostatectomy.

Patients were randomly assigned to undergo immediate adjuvant radiotherapy or delayed salvage radiotherapy delivered at the time of biochemical relapse. Both were given with short-term hormonal therapy.

For slightly more than half (54%) of the patients who received salvage radiotherapy, treatment was initiated after biochemical relapse.

At 5 years, the event-free survival rate was similar in both groups ― 92% in the adjuvant radiotherapy group vs 90% in the salvage radiotherapy group, Paul Sargos, MD, Institut Bergonié, Bordeaux, France, and colleagues report.

In contrast, acute toxic effects were much more prevalent in the adjuvant group, at 87%, compared with 44% among those in the salvage group. Rates of grade 3 or worse toxic effects were low in both groups, at 3% and 2%, respectively. Similarly, late grade 2 or worse genitourinary toxicities were documented in 27% of patients in the adjuvant radiotherapy group, vs 7% of those in the salvage radiotherapy group (P < .0001). The most frequent toxicities were urinary incontinence, urinary frequency, and hematuria.

“This delayed approach would be preferred unless adjuvant radiotherapy was superior to salvage radiotherapy according to long-term oncological outcomes,” the French investigators conclude.

The third study was the TROG 08.03/ANZUP RAVES trial, which was also a phase 3 trial. It was a noninferiority trial that involved 333 patients. Half of the patients were randomly assigned to receive adjuvant radiotherapy, and the other half received salvage radiotherapy. For both groups, radiotherapy was delivered at 64 Gy in 32 fractions, but in this trial, it was not given with androgen deprivation therapy.

At 5 years, freedom from biochemical progression (the primary endpoint) was again very similar in both treatment groups, at 86% in the adjuvant radiotherapy arm and 89% in the salvage radiotherapy arm.

“It now appears preferable to wait until the cancer recurs, heralded by a PSA rising to 0.20 ng/mL, before commencing radiotherapy, which would spare many men from potential radiotherapy-related side effects,” they suggest.

The ARTISTIC meta-analysis was prospectively designed before the results of the other three trials were known. Collectively, the analysis included 2153 men from these three trials. All results showed that there was no improvement in PSA-driven event-free survival with the use of adjuvant compared with salvage radiotherapy.

Indeed, there was only a 1% point difference in the 5-year event-free survival rate, at 89% for adjuvant radiotherapy and 88% for early salvage radiotherapy.

“Our findings suggest that following surgery, patients whose cancer is confined to the prostate or has spread only to nearby tissues or organs can safely be spared routine postoperative radiotherapy and its associated side effects,” lead author Claire Vale, MD, MRC Clinical Trials Unit, University College London, United Kingdom, said in a statement.

“Guidelines and policy regarding the standard of care for prostate cancer should be updated based on the findings of this review of the three new trials,” she emphasized.