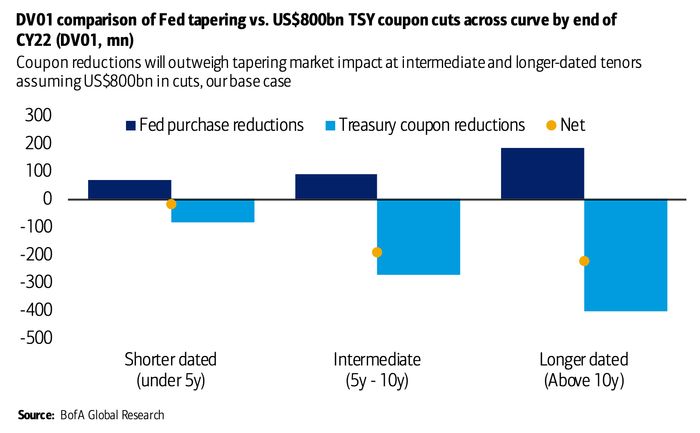 With much of the financial market fixated on when the Federal Reserve will be pulling back on its $120 billion in monthly bond purchases, BofA Global Research sees one thing that would offset any impact of future tapering by the central bank.

That is an anticipated reduction in the supply of Treasurys, resulting from an expected sharp decline in the government’s financing needs for the fiscal 2022 year, rates strategists Meghan Swiber and Ralph Axel wrote in a note Tuesday.

BofA’s assessment comes as the Fed starts the first of its two-day meeting in Washington, where policy makers are expected to continue discussions on tapering back on their combined monthly purchases of $80 billion in Treasurys and $40 billion in mortgage-backed securities.

The BofA strategists’ base-case view is that the Fed will begin tapering Treasury and MBS purchases next January at a monthly pace of $10 billion and $5 billion, respectively, and boost the amounts to be pulled back at roughly each meeting thereafter.

Meanwhile, they see the Treasury beginning to sketch out a plan for a reduction in issuance starting in November, regardless of the outcome around infrastructure spending, and with cuts across Treasury maturities ultimately totaling between $500 billion to $800 billion in fiscal 2022. The timing “is coincidental and driven by a decline in the policy response against the pandemic,” they said.

The magnitude of potential Treasury supply cuts will likely surprise the market and have two results, the strategists said: One is to widen swap spreads across the Treasury curve, especially at the back end, and the other is to “provide an ongoing headwind to higher rates.”

“We believe the magnitude of potential coupon cuts alongside a decline in fiscal year (FY) ’22 financing need is under-appreciated by the market,” Swiber and Axel said. They see the potential for the supply reduction to drive swap spreads wider in the coming months, and “recommend owning long-end spreads to position for a potential surprise.”

The report comes as the 10-year Treasury note
TMUBMUSD10Y,

was hanging around a multimonth low at 1.24%, while the Nasdaq Composite Index
COMP,
,
the Dow Jones Industrial Average
DJIA,

looked set to close lower for the first time in six sessions.