Home > Phone > Google Pixel 5a vs Apple iPhone SE: what to expect?

Google Pixel 5a vs Apple iPhone SE: what to expect? 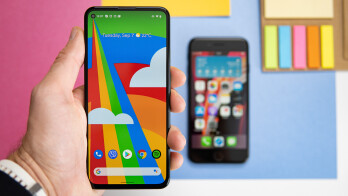 The Google Pixel 5a is rumored to launch in August and with improvements to one of the best cameras on an affordable phone, as well as a welcome performance boost, it will surely stir up the budget segment. However, if you are looking for the very best affordable phone, you will also inevitably bump into another device, the iPhone SE, which Apple launched in 2020, and which is still one of the best sellers in the segment.
Can the older iPhone SE still hold its own against the newer Pixel 5a? We take a deeper dive comparing the differences in design and quality of materials, but also the performance, the all-important camera quality and the expected battery life of these two budget heavy hitters.

Both the Pixel 5a and the iPhone SE are compact phones that are easy to handle with one hand and carry in a pocket. The Pixel 5a comes with a 6.2″ screen, while the iPhone SE sports a 4.7″ display. The iPhone is the smaller of the two, but not quite by as much as the screen sizes would suggest simply because the iPhone features that older design with big bezels on the top and bottom, while the Pixel features an edge-to-edge screen with a punch hole.

In terms of build quality, both are well put together, but they do use different materials: Google bets on a plastic build, while the iPhone SE consists of an aluminum frame and a glass back. Plastic on the Pixel might feel a bit cheaper and not quite as luxurious as glass, but it won’t shatter if you drop the phone and contributes to a lighter weight.

The iPhone is also water resistant and has an official IP67 rating, meaning that you can drop it in water and it would theoretically survive being submerged for as long as half an hour. We still don’t know whether the Pixel 5a will have similar water protection.

Leaked photos of the Pixel also confirm that it will have a headphone jack at the top of the device, a feature missing on the iPhone SE.

As for the screens, the Pixel 5a will come with a 6.2″ OLED display with FHD+ resolution, while the iPhone SE sports a 4.7″ LCD display with a 750p resolution. That is a big win for the Pixel: the older LCD technology used on the iPhone translates into less vibrant and contrasty colors, plus LCD screens are known for a slight but noticeable ghosting effect that is not present on newer OLED screens. Not only that, the lower resolution of the iPhone will also be noticeable as text appears slightly pixelized and not as sharp as on the Pixel.

A leaked camera sample confirmed early rumors that the Pixel 5a comes with two rear cameras: a wide and an ultra-wide one, compared to a single camera on the iPhone SE.

The iPhone SE has remained surprisingly competitive on the camera front as even with just one camera, it supports HDR and advanced features like proper 4K video stabilization that are still commonly missing on budget devices.

The Pixel 5a, however, shapes up to be a different kind of a budget phone, one that can match the iPhone SE and win with not only more versatility thanks to the ultra-wide camera, but also with quality as it supports HDR bracketing and Google’s well-known computation photography algorithms.

We will update this section once more information about the cameras becomes available, but so far we do expect the Pixel to have the upper hand in most camera aspects, and especially in low light shooting.

On the audio front, we’ve already mentioned that the Pixel 5a features the elusive headphone jack, while the iPhone does not, and we should also add that both phones come with dual speaker setups for more immersive audio.

Despite being much older, the iPhone SE is still the fastest $400 budget phone around

While the iPhone SE has a dated design and overall look, it has a screaming fast processor on the inside that is still unmatched in the budget segment. It’s powered by the Apple A13 chip, the same one that we find on the iPhone 11 and 11 Pro series. That is a monster of a chip that can still fight it out with the top-tier Qualcomm Snapdragon chips used on Android devices. Problem is that most Android devices in the budget segment don’t come with a top-tier chip, but instead they use mid-range processors, and so does the Google Pixel 5a.
Rumors currently suggest that the Pixel 5a will feature the very same Snapdragon 765G found in last year’s Pixel 4a, and that chip offers about half the performance power of the Apple A13, so it’s a huge downgrade.

So how does that affect real-world use of the devices? Well, apps and games load faster on the iPhone, nothing stutters, and multitasking is effortless, while on the Pixel you get the occasional stutter while scrolling around and gaming is nowhere nearly as good as on the iPhone.

We will update this article with performance benchmarks that show the precise power of these two phones as soon as we get an official confirmation about the processor used on the Pixel 5a.

Just looking at the battery specs, we can see a drastic difference in battery sizes between these two phones. The iPhone SE is equipped with an 1821mAh battery, while the Pixel 5a is rumored to feature a 4,000mAh+ cell, more than twice the size of the iPhone.

Usually iPhones are pretty good with background app management and squeeze the most of even smaller batteries, but the iPhone SE definitely stood out as a phone with weak battery life in our testing. While the SE struggles to last through a day of slightly heavier use, the Pixel 5a should make it alive to the charger on even those longer days.

As for charging, the iPhone SE comes with a 5W charger in the box, which is very slow, but the phone does support up 18W charging speeds that you can benefit from if you buy a compatible charger separately. The Pixel 5a, on the other hand, is expected to ship with an 18W charger included in the box that takes around an hour and 40 minutes to fully top up the battery.

Interestingly, the iPhone SE also supports wireless charging, a feature rarely found on budget phones, and the Pixel 5a does not.