Home > Gaming > Get Psychonauts and More PC Games for $1

Get Psychonauts and More PC Games for $1

Double Fine is celebrating its 20th anniversary with a Humble Bundle that gets you 23 of the company’s games and collections for a grand total of $9. That’s a ridiculously good value, seeing as purchased separately, they’d ring up to $303. Long story short, you’re getting a discount of 97%.

The games come in the form of Steam codes, though many are also available DRM-free. You can buy in at three tiers, starting at $1. Here’s what comes in each tier. 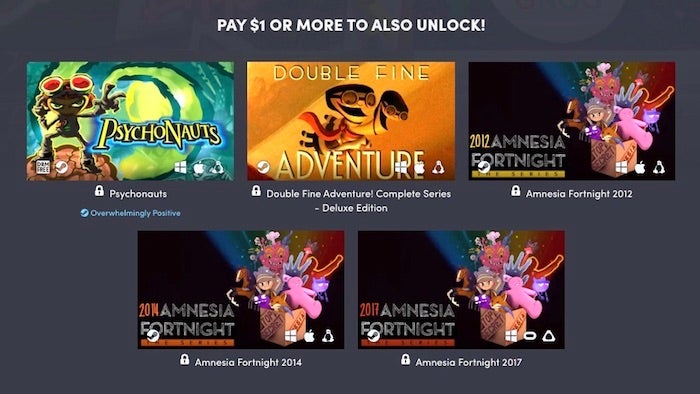 Crucially, the first tier includes Psychonauts, one of the most inventive 3D platformers ever made, if you ask me. It also gets you Double Fine Adventure, a docu-series about the making of Broken Age. It’s a fantastic glimpse into what goes into the making of a video game (it’s also on YouTube for free). Finally, you get three Amnesia Fortnight collections, which are basically prototype games the people at Double Fine made during some of their annual game jams. 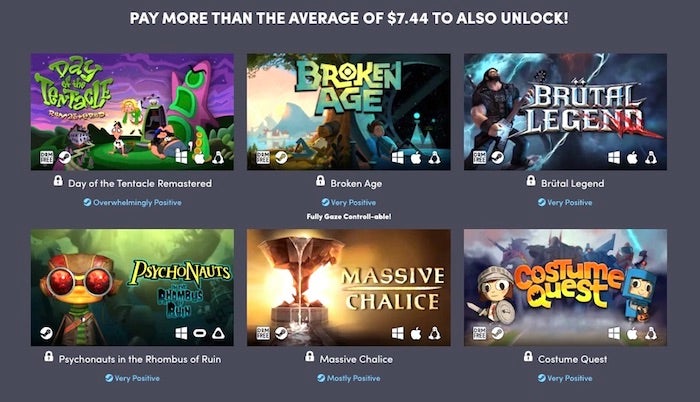 Now we’re cooking. Pay more than the average of the people who bought in before you, and you’ll receive everything in tier one, plus six additional games. These include the aforementioned Broken Age, as well as Brutal Legend, Day of the Tentacle Remastered, Costume Quest, Massive Chalice, and Psychonauts: In the Rhombus of Ruin. 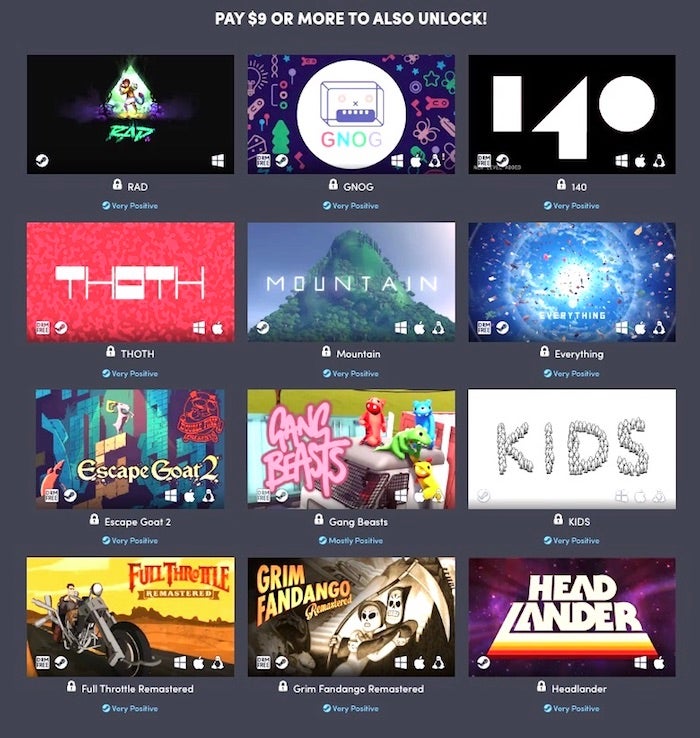 The final tier unleashes an avalanche of additional games, including gems like GNOG, Full Throttle Remastered, Head Lander, and Grim Fandango Remastered. This is, as they say, a good tier.

As a bonus, purchasers of this Humble bundle will get soundtracks for GNOG, 140, THOTH, Everything, Escape Goat 2, Gang Beasts, and Grim Fandango Remastered (that one is especially great, btw). And if you buy in at the $9 tier, you’ll get a free month of Humble Choice, assuming you’re a new subscriber.

All told, this is a whole lot of content for a very low price. The bundle will be available for purchase until August 13. Grab it here before you forget.

Disclosure: Humble Bundle is owned by Ziff Davis, the parent company of IGN. Humble Bundle and IGN operate completely independently, and no special consideration is given to Humble Bundle announcements or promotions for coverage.

Where to Preorder Xbox Series X Controllers an...

Among Us error codes: What they mean...