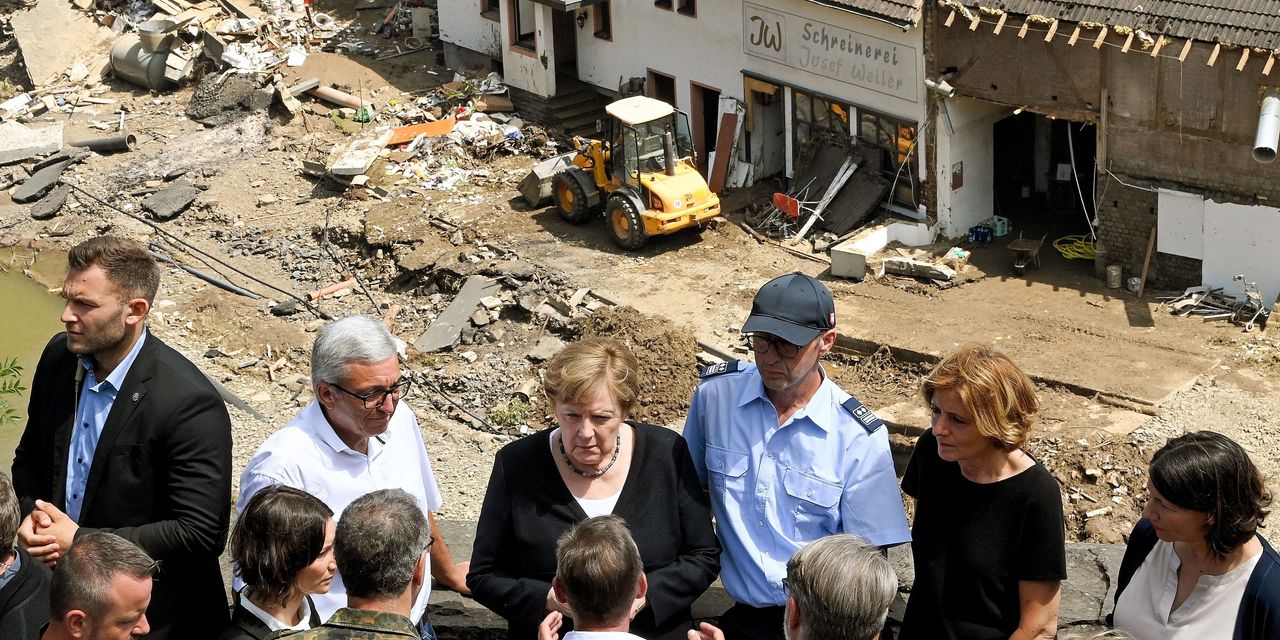 BERLIN—Last week’s devastating floods in Germany that have so far claimed nearly 160 lives have become the central issue of the country’s coming election that could reshape its political landscape.

The leading contenders—as well as Chancellor

who isn’t running for re-election—have flocked to the worst-hit areas, promising relief and pointing the finger at climate change for one of the country’s deadliest disasters since World War II.

International meteorologists warned last weekend that large rainfalls could cause severe flooding in the affected regions. The warning was relayed by the German government’s weather service and the media. Yet in Germany’s federal system, local authorities are in charge of disaster management and they didn’t order large-scale evacuations.

All the necessary warnings were issued by meteorologists, yet the alert didn’t trigger any reaction on the ground, Hannah Cloke, professor of hydrology at the University of Reading in Britain, told the German public broadcaster ZDF. “It’s unbelievably frustrating.”

After wreaking havoc on western Germany last week, heavy rainfalls moved to southern and eastern parts of the country and into neighboring Austria on Sunday, swelling rivers and overwhelming several towns and villages in the valleys.

Visiting one of the worst-hit communities on Sunday, Ms. Merkel painted the flood as a warning that authorities should continue their fight against climate change.

“It will be necessary to enact policies that take the environment into account more than has been the case in recent years,” she said. Such floods have always been taking place, she added, but they are now becoming ever more frequent.

the Green Party co-chair and lead candidate for the election, interrupted her vacation to travel to flooded areas in Rhineland-Palatinate on Friday, delivering a similar message.

“It is important to me to be personally informed—without going into areas where acute rescue efforts are ongoing—about the situation there,” Ms. Baerbock told the SWR public-sector broadcaster. She added that much more should be done to fight climate change in coming years.

Scientists say global warming may have played a role in increasing the frequency of severe weather events. But they also say individual disasters such as the latest flooding were often caused by an array of factors ranging from rare weather patterns to topography and urbanization.

Karl-Rudolf Korte, a professor of political science at the Duisburg-Essen University said the framing of the event in the context of climate change could benefit the Green Party at the election because surveys showed they enjoyed higher credibility in environmental matters than all other parties.

So could suggestions leveled by some scientists that regional and federal authorities failed to react adequately to the flood warnings, an argument that is so far absent from the political debate here.

The Sept. 26 election is one of the most closely watched in Europe in recent years. It will decide who succeeds Ms. Merkel, one of Europe’s most influential and longest-serving leaders, who is bowing out after 16 years in power.

It also is shaping up to be one of the closest in Germany’s post-World War II history. Ms. Merkel’s conservatives are now polling at 29%, the Greens at 19%, and the Social Democrats at 16%, according to Politico’s poll of polls from July 16.

Most pollsters currently predict that the next coalition will be between the conservatives and the Greens, although other, more complicated combinations could emerge given the historically small difference in the parties’ respective ratings.

The flooding has now made these calculations even harder to compute.

The need to fight climate change is part of the political consensus in Germany and while some parties converted more recently to the issue than the Greens, all are advocating similar policies.

Manfred Güllner, head of the Forsa polling group, said there was no evidence that voters linked the flood to climate change. And as an opposition party, the Greens are finding it difficult to slip into a crisis-management role following the disaster, he said.

This is the role

chairman of Ms. Merkel’s Christian Democratic Union and front-runner in the race for the chancellery, and

federal finance minister and lead candidate for the center-left Social Democrats, have sought to play in recent days.

Mr. Laschet, who also is premier of North Rhine-Westphalia, one of the country’s worst-hit states, was first on the scene. But he was filmed giggling in the background while the federal president held a somber speech about the flood. Mr. Laschet later apologized.

His party has wholeheartedly embraced the fight against man-made global warming but Mr. Laschet himself has championed a nuanced approach, stressing the need to protect the environment without hurting German industry.

When asked last week whether he would change his stance, he said: “Just because we have a day like this, we should not change our politics.”

Mr. Scholz also has leapt into the role of crisis manager. Ms. Merkel’s finance minister has announced 300 million euros, or about $354 million, in emergency aid and will draft a much larger aid package for the region to be discussed by parliament this week.

Severe floods, which are relatively frequent in Germany, have a history of influencing federal elections. In 2002, damaging floods were widely seen as having helped Gerhard Schröder, the chancellor at the time, win what had seemed an unlikely re-election by propelling him into the role of successful crisis manager.

Ms. Merkel herself played down the significance of the flooding for policy makers, and said they simply had to persevere with policies already being implemented in Germany and Europe.

“There are no new lessons [from the flood]: We must tackle climate change…and we must focus on transformation,” Ms. Merkel said in response to a reporter’s question on Sunday. “Investment in climate protection is expensive, but not investing would be even more expensive.”