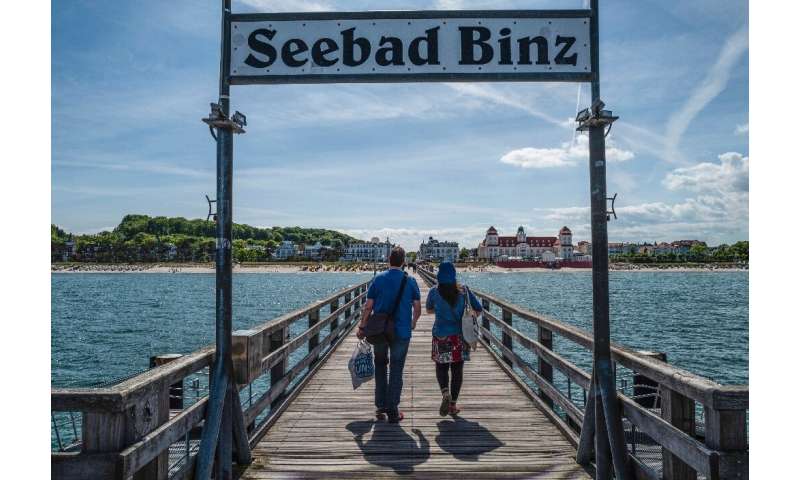 Germans usually love their sun-soaked summer holidays abroad. But fears of a second wave of coronavirus infections have prompted a new holiday destination of choice: their home country.

On a recent public holiday, it was only 17 degrees Celsius (62 degrees Fahrenheit) in the seaside resort of Binz on the island of Ruegen.

But in the bright sunshine, with families playing ball on a sandy beach and couples lounging around with ice creams, it already felt like the height of summer.

It was almost as though the virus and weeks of lockdown since mid-March had all been a bad dream.

Few of the tourists wandering along the promenade were observing social distancing rules, and apart from restaurant staff and ice cream sellers, no one was wearing a mask.

At the start of this week, Mecklenburg-Western Pomerania, the northern German state least affected by the coronavirus pandemic, reopened its hotels, initially just for locals. From Monday, Germans from all over the country will be able to join the fun.

For local resident Regina, it’s a relief to see people milling around again on the promenade on the Baltic Sea, with its pretty white houses.

“It is nice. We’ve been feeling very lonely in Binz lately,” the 69-year-old said.

“It feels good, liberating, to be here again!” said Julia Holz, 34, who came to Binz with her husband and two children to visit family and enjoy the beach.

While half of Germans like to spend their summer holidays elsewhere in Europe, with Spain the top destination, more than a third preferred a staycation even before the coronavirus, according to official statistics.

Apart from Ruegen and the Baltic Sea coast, Bavaria is also a popular choice, with its mountains and romantic castles.

But this year, according to Munich-based tour operator FTI Group, demand for holidays at home has gone through the roof.

“Bookings by German holidaymakers in their own country are well ahead,” said director Ralph Schiller, noting a “clear upward trend” in stays of at least one week compared to last year.

This is partly down to continued uncertainty around travel restrictions.

But even if borders are reopened, tourists will still have many unknowns to navigate, according to Norbert Kunz, president of the German Tourism Federation.

“What security measures are in place? What happens if a new wave of coronavirus breaks out in the destination country or at home, and if it leads to new travel restrictions?” he points out.

Compared to its neighbours France and Italy, Germany has so far managed to stay on top of the crisis and prevent its hospitals from being overwhelmed.

There is a “sense of security” in staying at home, according to Binz resident Regina, who won’t be holidaying abroad this year.

Germany is preparing to lift an official ban and allow travel to some European countries from mid-June, meaning trips to the Mediterranean will theoretically be back on the menu.

But politicians are taking pains to keep stressing the risks.

“Be under no illusions: There will be no quick return to ‘business as usual’,” Foreign Minister Heiko Maas has warned.

Having brought home some 240,000 Germans stranded abroad in recent weeks, the government has warned there will not be another costly effort on this scale in the event of a second wave of the virus.

But there remains “the problem of accommodation capacity for holidaymakers”, stresses Aage Duenhaupt, a spokesman for tour operator TUI—plus the fact that virus regulations still differ from region to region.

In Mecklenburg-Western Pomerania, hotels are permitted to use only 60 percent of their capacity, while in other regions there are no limits.

“We hope this restriction will be lifted soon, perhaps next week,” said Oliver Gut, director of a boutique hotel chain in Binz.

“The situation remains very tense” financially, according to Kunz of the tourism federation.

He estimates that the sector lost around 35 billion euros ($38 billion) in revenues between March and May, and is calling for a state support plan with immediate aid and investment.

“It will be a long time before we get back to normal,” he said.

Follow the latest news on the coronavirus (COVID-19) outbreak

Citation:
Germans opt for staycations as virus fears linger (2020, May 23)
retrieved 23 May 2020
from https://medicalxpress.com/news/2020-05-germans-opt-staycations-virus-linger.html