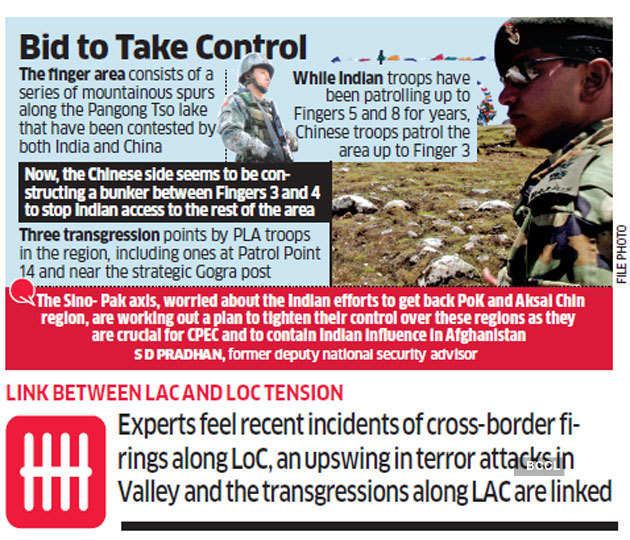 NEW DELHI: The possible construction of a Chinese bunker in the finger area along Pangong Tso lake and three reported transgressions in the Galwan region have raised concern as the standoff between troops continues at the Line of Actual Control (LAC).

The security establishment is also closely monitoring developments along the Line of Control with Pakistan and possible links with the developing situation on the Chinese border and Islamabad’s recent moves in PoK.

Persons tracking developments say that the synchronised incidents can hardly be treated as a coincidence, with extra vigil being maintained on all borders to counter any coordinated move. Sources in the security establishment say that the Galwan region in Ladakh continues to remain tense after additional heavy vehicles were spotted.

It is believed that there are now three transgression points by PLA troops in the region, including ones at Patrol Point 14 and near the strategic Gogra post.

Reports coming in suggest that over 500 Chinese soldiers are present at each of these spots that are within Indian territory.

The deployment has been countered by the Indian Army that has moved in additional troops to the area as well.

It is also believed that a new bunker is now being constructed by the Chinese side in the finger area along the Pangong Tso lake. The finger area consists of a series of mountainous spurs along the lake that have been contested by both sides.

While Indian troops have been patrolling up to Fingers 5 and 8 for years, Chinese troops patrol the area up to Finger 3.In a change in the ground position, the Chinese side seems to now be constructing a bunker between Fingers 3 and 4, which will be designed to stop Indian access to the rest of the area. Chinese troops have also taken positions on the spurs. This, along with increased patrolling by Chinese boats in recent weeks, shows an aggressive stand taken up on the border.

The incident has brought back memories from the Kargil war, when the Chinese side used the opportunity to build a five-kilometre-long track along the Pangong Tso lake to step up patrolling. The track was completed in record time after Indian troops were pulled out to counter the Pakistani incursions.

Experts believe that recent incidents of increased cross-border firing along the LoC, an upswing in terror attacks in the Valley and the transgressions along the LAC are linked. All events are taking place in the first summer after India decided to revoke the special status of Jammu & Kashmir under Article 370 and divided the state.

“The Sino- Pak axis, worried about the Indian efforts to get back PoK and Aksai Chin region, are working out a plan to tighten their control over these regions as they are crucial for CPEC and to contain Indian influence in Afghanistan,” S D Pradhan, former deputy national security advisor, told ET. “Nepal has also been roped in to pressurise India. The recent map issued by Nepal that included extra Indian territory and the vow to reclaim the Kalapani region appears to have been at the behest of Sino-Pak axis.”

Will more govt debt in mutual funds benefit yo...