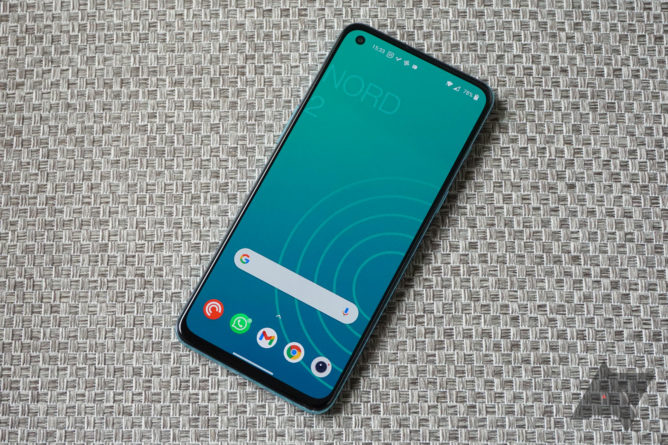 The original OnePlus Nord launched with much fanfare, promising a return to the flagship killing days the company had long since left behind. That first phone delivered excellent value for money, but subsequent devices in the Nord series have mostly left us scratching our heads (with the possible exception of the N200). Nord 2 5G is a true successor that comes at us from a slightly different angle. It’s the first OnePlus phone with a MediaTek processor and — at least on paper — it doesn’t seem to imbue the same excitement as its predecessor.

The Nord 2 is better than anything else in OnePlus’ budget lineup, but the real question is whether it’s still as compelling in the face of its many rivals. Competition in the mid-range market shows no sign of abating, with Xiaomi, Realme, and Samsung among the manufacturers pumping out competent but affordable handsets in great numbers. Is OnePlus well-positioned to take a decent slice of that pie with the Nord 2 or are you better off taking your money elsewhere?

First impressions count a great deal with smartphones — they’re all slight variations on the same theme so they need to do something to grab your attention. Some recent OnePlus models have dazzled right out of the box, especially the glorious green OnePlus 8 and bright blue 8 Pro. Since then, the company’s mainline devices have gone for more muted hues while the Nord series has been committed to its turquoise brand color. This consistent trend, along with rear designs that all blend into one, means that the Nord 2 just looks like any other OnePlus phone. There’s simply no wow factor when you first get your hands on it. And that’s not to say it doesn’t feel nice, plastic frame aside (sorry, I mean “fiberglass-infused polymer”). It’s got Gorilla Glass 5 front and back, and the build quality is solid. It’s just all a bit bland — the lighter colorway isn’t as eye-catching as the shimmering Nord CE, even if that is made of plastic instead of glass. If you live in India, you’ll have the opportunity to buy the exclusive Green Woods leather model, which looks far more appealing.

Once you get past those superficial judgments, the rest of the Nord 2’s hardware is competent, if uninspiring. There’s no headphone jack (new OnePlus Buds Pro, anyone?), but the ringer switch makes a welcome return, and there are decently loud stereo speakers this time around (bottom-firing and earpiece). It’s practically the same size as its predecessor, which is about as large as I like a phone to be — comfortable in the hand but with a spacious screen. At one time, a 6.4-inch FHD OLED with a 90Hz refresh rate would have been hugely exciting on a phone in this price range, but you can get 120Hz for less right now on a Poco F3. The screen on the Nord 2 is excellent, nonetheless, but it’s a shame to see the bottom bezel actually increase this generation.

Under the display, there’s a fast and accurate fingerprint scanner which I really enjoy using in tandem with face unlock — the latter for quickly getting past the lockscreen and the more secure method for banking app approvals and convenient unlocking while wearing a mask. The haptics are nothing special, but I actually quite like the subtle buzz they emit. OnePlus has never been one to fork out for official IP ratings, and Nord 2 is no different. It’s apparently splash-proof, at least, so you won’t have to worry about being caught in the rain.

In the box, the Nord 2 is accompanied by a clear TPU case (with an unfortunate pattern on it that takes away some of the grip), a 65W adapter, and a USB-A to C cable. If the included case doesn’t float your boat, OnePlus once again provides an excellent array of alternatives.

Many observers will have scoffed at the thought of a MediaTek-powered OnePlus phone, but they’d soon change their tune if they used it. Performance flies, just as good as the original Nord and likely better. For what it’s worth, the Dimensity 1200-AI chip is said to be roughly equivalent to Snapdragon 865 or 870, and you won’t be yearning for Qualcomm silicon after using it. The other elephant in what must be a really large room is throttling — yes, it’s still going on here, but it’s not noticeable on the Nord 2, and OnePlus assures us there will be a toggle for turning it off in OxygenOS 12. This phone definitely doesn’t have the best graphics in the price segment, and it only has a 90Hz display, so if gaming is really important to you, you might be better going for the Poco F3 or Realme GT. Other than that, the Nord 2 carries on the OnePlus tradition with a fast and smooth user experience.

Much has been made of the potential switch to using Oppo’s ColorOS on OnePlus phones as part of the continuing integration between the two BBK brands, and the Nord 2 is the first handset to make the switch. It’s actually pretty hard to tell, however, as it still has an OxygenOS layer on top. The settings have been reorganized and there are subtle differences here and there, but don’t worry — this feels like a OnePlus phone. I’m personally not a fan of the major redesign that arrived with OxygenOS 11; I preferred it when it was closer to Google’s Pixel UI. But even so, with Always-on Display and tons of customization options, the Nord 2 doesn’t want for software features.

In theory, supporting a single codebase should mean faster updates, and this is sorely needed because OnePlus has fallen behind rivals like Samsung. The Nord 2 promises two years of OS updates and three years of security patches, but let’s hope OnePlus steps up the frequency and quality of those updates with Oppo’s help. For what it’s worth, I’ve encountered no major issues or bugs on the Nord 2 so far. That’s encouraging since early firmware versions on OnePlus phones aren’t always so proficient.

Battery life is clearly a priority for OnePlus (hence the throttling and other optimizations) and it bears out in real use. The 4500mAh battery is good for well over a full day’s use — I usually end the day with around 30-40% remaining after 4-5 hours of screen-on time. There’s every chance I could eke out two days if I really needed to. Thanks to 65W charging, it only takes 30 minutes to fully charge, too. Of course, to achieve such good battery life, OnePlus still dabbles with app optimizations that can cause some missed notifications, so I’d recommend turning it off for the apps that matter to you. I found Gmail to be affected by this quite often even though it doesn’t show in the optimization settings, which was pretty frustrating.

The original Nord tried to really sell us on the camera system — it had four rear lenses and a dual selfie cam — but its successor is more modestly equipped. There’s a single 32MP front camera along with three on the back. The main sensor is the 50MP Sony IMX766 with OIS, and it shoots binned 12.5MP images by default. The quality is perfectly acceptable, with plenty of detail, but it can be a little heavy-handed with HDR processing. One of the key capabilities brought to the device by the Dimensity 1200-AI chip is supposedly automatic scene selection, and while it mostly does a good job of understanding each shooting environment, if you’re photographing anything that looks vaguely like an animal of any kind, it is a “Kitty” every time. Not a huge problem, but I did find it amusing.

Low light performance is often disappointing, with aggressive processing ruining the finer details and not preserving the atmosphere of the scene. The Ultra Night Mode is impressive, somehow magicking extra light out of thin air. The images it produces are not sharp, though, understandably so. The ultrawide, as is so often the case on less expensive phones, is pretty underwhelming. It produces muddy images that are rarely usable for anything other than jogging your memory — you won’t even want to share them on social media. There’s no dedicated zoom lens and the digital alternative isn’t up to much. At 2x, results are passable since this is achieved with sensor crop. At 5x, with good lighting conditions, you can sometimes get okay results too, but anything past that turns into an oil painting.

The selfie camera is one of the brighter notes here — it seems to be at least as good as on more expensive OnePlus phones, and the portrait mode is good enough for sharing on Insta if you’re into that. On the video side, you’re looking at up to 4K/30fps with AI video enhancement, although stabilization could be better. It’s also got a Dual View Video mode so you can take footage front and back at the same time, which is pretty fun to play around with for a while.

There is also a monochrome sensor, which is… well, it’s there. I’d rather it wasn’t.

One for the fans. While the OG Nord did feel like something of a flagship killer, this one isn’t as competitive a year on. Flagships in 2021 are required by law to have 120Hz screens, fast wireless charging, zoom cameras, and IP ratings. A phone without any of that can’t realistically hope to go toe-to-toe with much more expensive models, and that’s fine. Despite what OnePlus marketing would have you believe, this phone isn’t really trying to compete with premium handsets.

The Nord 2 doesn’t pose a threat to proper flagship phones.

Nonetheless, it is a very good, affordable mid-range phone, albeit one that’s less compelling than its predecessor. If you’re a OnePlus fan coming from an older phone, you likely won’t be disappointed with the Nord 2. But if you’re willing to look at other manufacturers, you might be able to find better value. The Poco F3 costs less and has a Snapdragon 870, a 120Hz display, and an IP53. The Realme GT packs a Snapdragon 888, although it does cost a little more. Even Nord CE arguably offers better value — it costs £100 less but isn’t drastically less capable in any area. If you care about fast updates, the Samsung Galaxy A52 is calling you. If it were me, I’d choose the Pixel 4a over the Nord 2 every time — the camera is just miles better.

The Nord 2 is emblematic of the wider problem OnePlus is facing right now. It makes great phones with decent software, but it is struggling to stand out and is no longer anywhere near as competitive on price. The Nord series is apparently selling very well, so there’s no reason to believe this one will do badly. But after I reviewed the original OnePlus Nord last year, I kept using it for quite some time afterward. With the Nord 2, I’m already eager to move on, and that is very telling.