Home > Gaming > Firefighting Simulator has infinitely long hoses, so I filled a neighborhood with them

Firefighting Simulator has infinitely long hoses, so I filled a neighborhood with them 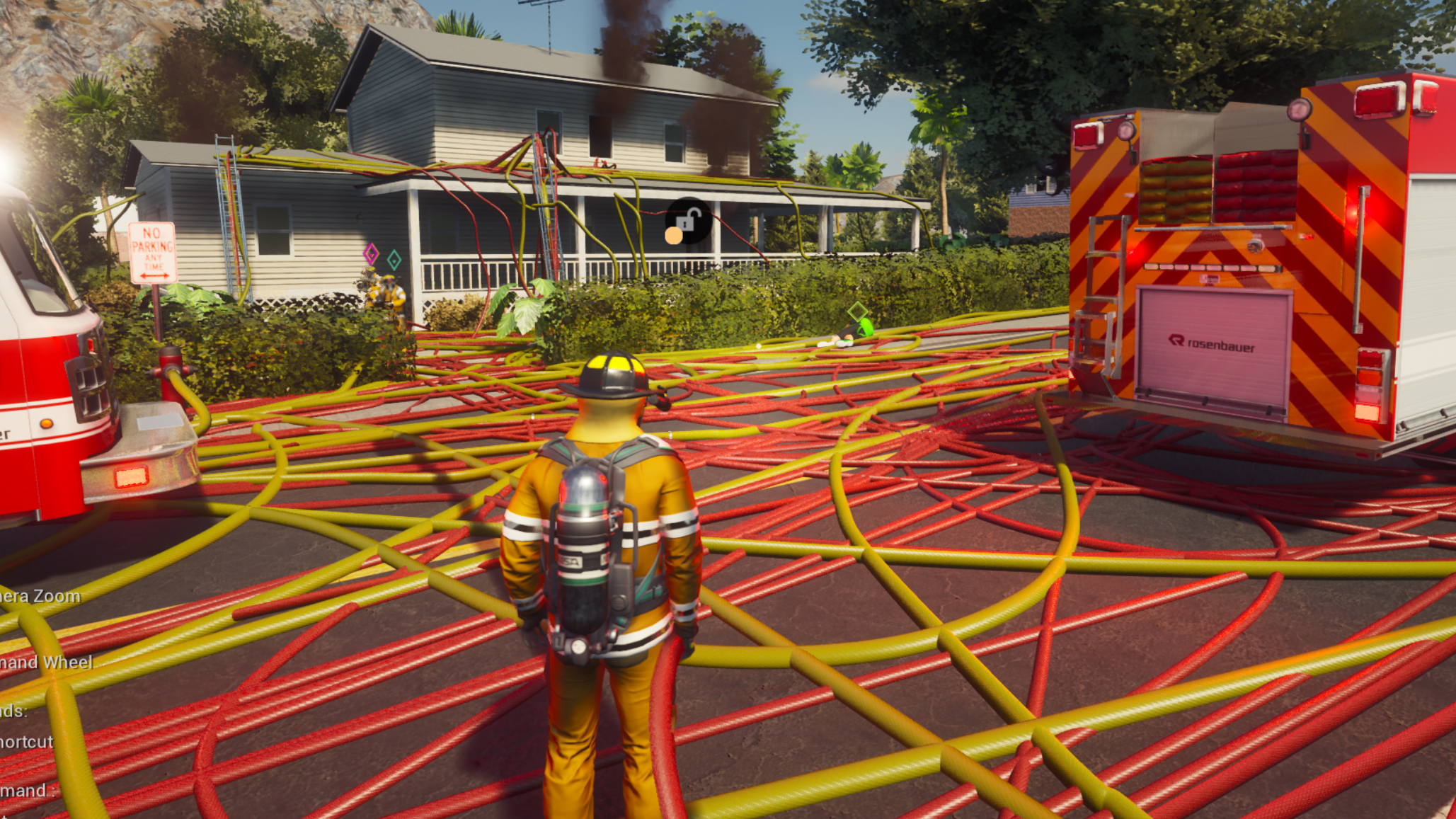 The problem began during the tutorial, when I was running around holding one end of a supply hose, with the other end connected to the fire truck. I noticed the hose kept stretching no matter how far I dragged it. Running around the truck several times, the hose never ran out or reached any sort of limit.

“Well, there goes my entire morning,” I said. I began wondering just how much hose there really was and what would happen if I stretched it for as long as I could. The tiny tutorial area didn’t feel like the proper place to test it, though. I need a grander canvas.

So, on my second proper firefighting mission, I decided to see how much hose I could stretch out. The fire was in a residential neighborhood, and after driving the fire truck all the way there, I hooked up my first hose. Instead of using it to put out the fire, I just ran around in circles in the street.

I was doing pretty well when the mission abruptly told me I’d failed, because this simulator is apparently a stickler about houses burning out of control while helpless victims are trapped inside and firemen fuck around in the street instead of helping. This isn’t an open world game but a mission-based one, so failing a mission kicks you right back to the menu.

Clearly, I needed to complete enough of the mission so I wouldn’t fail it, but not so much of it that I’d finish it, which would hopefully give me an infinite amount of time to test out the infinite hose. I restarted the mission, eagerly racing the other fire truck to the scene by taking shortcuts to get ahead of it and only causing a little bit of property damage in the process.

When I arrived, I directed my AI squadmates (you can play co-op with real people, too) to start fighting the fire while I attempted to rescue the three occupants of the house. I smashed open windows and doors with an axe and carried them out. Two of them I delivered to the paramedic, but I dropped the last unconscious victim in the street a few feet away from the ambulance.

Then I went through the trouble of actually dousing the fire with my AI team (I have no footage of this because I deem it an unimportant accomplishment) which took a while as it was a massive fire and I was distracted just thinking about all the beautiful hose I was going to spread out in the neighborhood. Finally, the fire was out, and the final victim was lying a few feet away from safety. I’d done enough to eliminate the danger without actually finishing. Now, it was my time. I grabbed a hose and began running around like a goddamn idiot.

Luckily I remembered I could also direct each of my AI teammates to pick up hoses and follow me. They’re slow, and they don’t really like to wind their hoses around signs and vehicles and trees and other NPCs the way I do, but it still feels like they’re helping a bit.

Minutes pass, like 30 minutes of me just running around the place with an ever-lengthening hose, and the mission still hasn’t failed, thankfully. Progress is going well. I’ve filled up the street quite a bit. I begin working on the yard, too. I switch from the red hose to the yellow hose because it seems a bit thicker and thus more satisfying to spread around.

With the yard beginning to fill, I begin climbing on the roof of the house and jumping off, which makes the hose look like a weird sculpture frozen in midair. The fall injures me but I quickly regain my health, just like a real firefighter, and can make another jump a moment later. My AI crew only won’t stupidly jump off ledges like I do, so they’re not threading their hoses around as much as I am, but I still appreciate their efforts. Good job, squad!

As we close in on 45 minutes of running in circles, I’ve filled up as much of the yard as I can, or at least as much as I’m willing to. It’s not quite as satisfying because the hose isn’t as easy to see in the grass, but I’m still pretty happy with all the progress. My framerates, however, are starting to take a hit from cramming every available inch of virtual ground space with hose. I’m also worried that there may be a time limit on this mission, and I don’t want to autofail after an hour or crash the game. I decide to wrap it up. (My hose quest, not the actual hose. Wrapping up this much hose would take days.)

I’m pretty pleased with what I’ve accomplished over nearly an hour of running back and forth. I drop the hose, take a final victory lap to survey my work, and then pick up the still-unconscious victim and plop him in front of the extremely patient medic. The game, clearly impressed with my efforts, gives me a little cutscene so I can revel for a few final moments in what I’ve done here:

But my final mission score isn’t so great. I’m given 500 points for driving fast, but only 50 points for my mission time of nearly an hour. The rest of my stats: I opened 7 doors, I broke 3 windows and rescued 3 victims, and I walked 9,321 meters. That’s about 30,000 feet, which is roughly 5.6 miles. The standard length of a fire hose is 50 feet, so I splayed out the equivalent of 600 hoses.

That’s not an infinite amount of hose, but it’s still quite a lot of hose. It took a while, but it was worth every step.