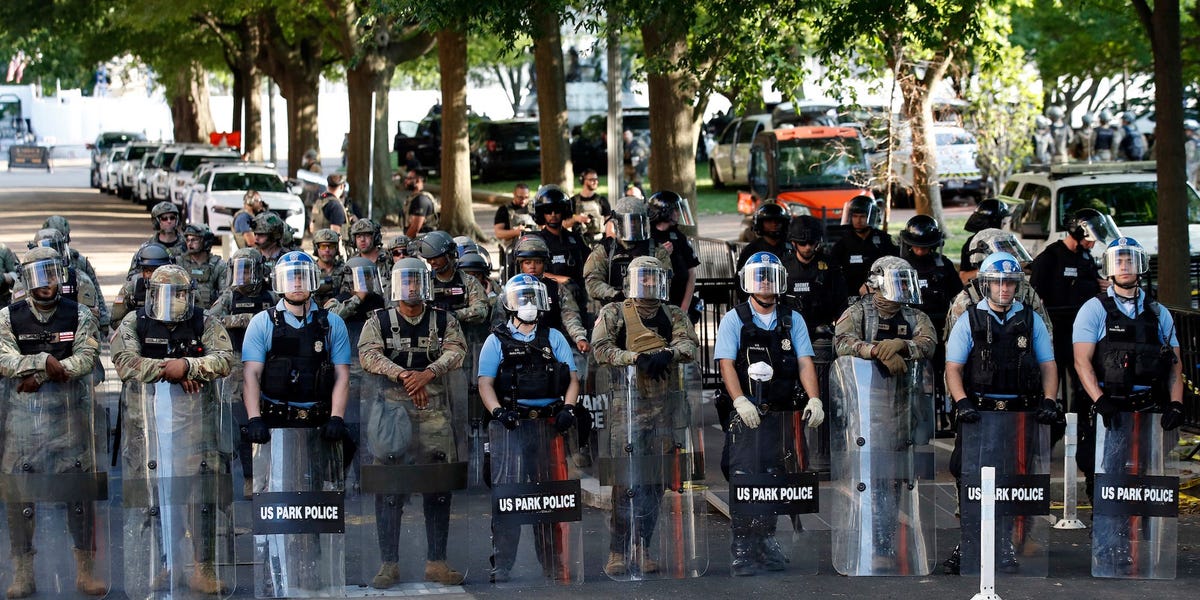 On June 1, federal law enforcement officers used tear gas, rubber pellets, and other aggressive tactics to remove protesters from Lafayette Square in Washington, DC, so President Donald Trump could have his photo taken in front of a church near the White House.

Hours before that, officials were busy trying to stockpile semi-automatic rifles, thousands of rounds of munitions, and controversial crowd control technology, according to sworn testimony submitted to lawmakers by DC National Guard Maj. Adam DeMarco, The Washington Post and NPR both reported Wednesday.

The US National Guard and US Park Police could not immediately be reached for comment.

DeMarco, who was the senior-most DC National Guardsman on the ground on June 1, testified that a stash of M4 semi-automatic carbine rifles arrived at the DC Armory earlier that day, followed by “approximately 7,000 rounds” of 5.56 mm and 7.62 mm ammunition in the days following, including from states as far as Missouri and Tennessee, according to the testimony.

Officials in DC also unsuccessfully sought to acquire an Active Denial System (ADS), a controversial “heat ray” that has resulted in test subjects suffering second-degree burns, arguing it could give officers “the ability to reach out and engage potential adversaries at distances well beyond small arms range, and in a safe, effective, and nonlethal manner,” DeMarco reportedly testified.

The New York Times reported last month that the Trump administration considered deploying ADS technology at the US-Mexico border despite long-running “doubts over its effectiveness and morality,” but that then-Homeland Security Secretary Kirstjen Nielsen shut the idea down.

“That anyone in the Department of Defense referred to American citizens exercising their First Amendment rights as ‘potential adversaries’ and even contemplated the use of an ADS on the streets of our nation’s capital is deeply disturbing and calls for further investigation,” DeMarco’s attorney, David Laufman, told The Washington Post.

US Park Police Chief Gregory Monahan testified in July that officers issued dispersal warnings via a “long-range acoustic device,” or LRAD, according to The Washington Post.

But DeMarco disputed that claim, testifying that “there was no LRAD on-site at or near Lafayette Square on June 1,” adding that the warnings were issued via a handheld microphone attached to a standard megaphone and that they were “barely audible” from his position 30 yards away — while the protesters were at least 50 yards away.

In late June, congressional lawmakers began investigating officers’ use of force against protesters in Lafayette Square and have heard testimony from both DeMarco and Monahan as well as protesters, journalists, and other witnesses.

DeMarco’s testimony comes as reports surface that US Attorney General William Barr told federal prosecutors to be aggressive with charges against violent protesters, called for potentially charging them with sedition, and called for criminal charges against Seattle’s mayor over the city’s autonomous police-free zone during the protests earlier this summer.

The reports paint an even more detailed picture of the Trump administration’s aggressive response to anti-police brutality protests that have roiled the nation since George Floyd’s death in June.