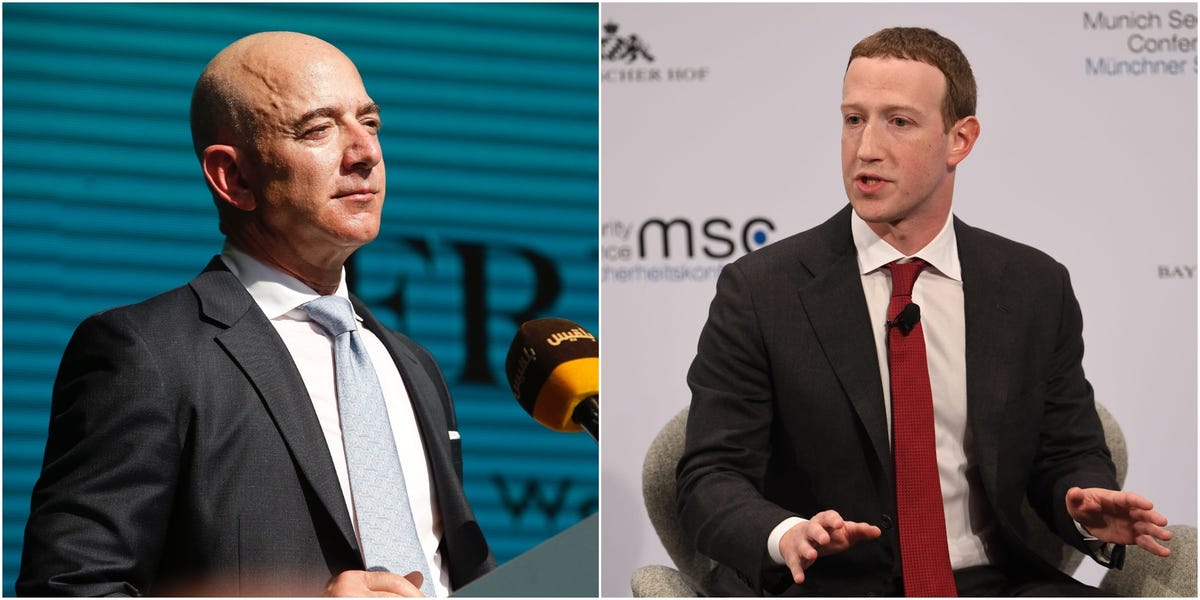 You’d never know there’s a recession gripping the US economy by the looks of mega-cap tech stocks.

On Friday alone, some of the wealthiest executives added billions to their wealth, according to Bloomberg’s Billionaires Index, after Facebook, Amazon, and Apple all blew past quarterly earnings expectations and largely shrugged off the widespread losses elsewhere in equity markets.

When the dust settled from Friday’s trading session into Monday morning, Facebook had climbed 8.2% to a record high of $253.67, netting CEO Mark Zuckerberg $7 billion in the process. Amazon, meanwhile, closed up 3.7% at $3,164.68, increasing CEO Jeff Bezos’ wealth by a similar $7 billion.

The moves come despite the men appearing alongside their Silicon Valley peers at a contentious antitrust hearing in the US House of Representatives on Wednesday. Apple also saw similar stock gains, but its chief executive didn’t make Bloomberg’s rankings.

Like many other C-suiters on Bloomberg’s list, Apple CEO Tim Cook’s riches are largely tied to stock ownership in Apple. That means his net worth is largely tied to day-to-day fluctuations in the stock market. Luckily for the cohort, tech stocks have surged since January 1 while equities generally have struggled to see any growth this year.

Such a winning streak has helped other billionaires, like Elon Musk, move up the list. While Cook hasn’t yet officially made the list, his wealth also likely increased in-step with the stock prices, depending on how many stock options he’s been awarded.

Billionaires or not, corporate executives have largely given up less as the virus eats into US economy, precipitating record unemployment and a massive decline in GDP. A survey by the firm CGLytics, as reported by The New York Times, found that 3,000 leaders of public companies took pay cuts in some form or another, but in many cases they amounted to a very small percentage of overall compensation.

And when Payroll Protection Funds begin to run dry this month, many businesses have said they’ll soon have to cut even more staff.

“COVID-19 is far from beaten and while there is optimism about a vaccine, the timing and its efficacy are still unknown,” ING chief economist James Knightley said in a Thursday note. “With virus fears on the rise, jobs being lost and incomes squeezed, we feel the recovery could be much bumpier than markets seemingly do, and think we are in for some data disappointment over the next couple of months.”

Lindsey Graham says Trump has a 'dark side' an...