Home > Business > Eurozone banks are showing life after 15 rough years. Will the ECB snuff out the rally?

Eurozone banks are showing life after 15 rough years. Will the ECB snuff out the rally? 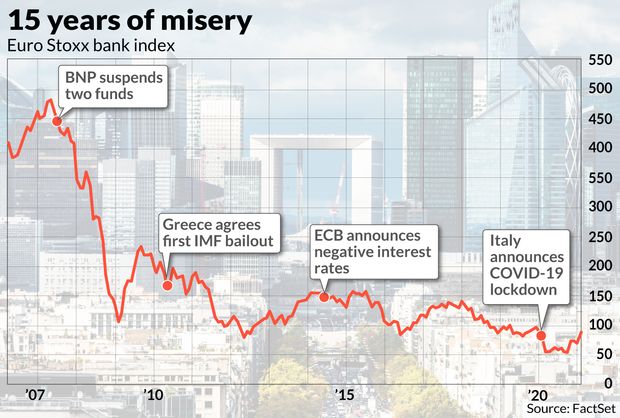 It has been a pretty rough 15 years for the eurozone’s leading banks.

The bad times have been ghastly — the 2008 financial crisis, the Greek debt crisis, and now, the COVID-19 pandemic. But even the good times haven’t been so great, with lenders in the 27-nation grouping facing a backdrop of negative interest rates and stagnant local economies. From its 2007 high to the 2021 low, the Euro Stoxx banks index
SX7E,

But suddenly there is life in the grouping that is led by France’s BNP Paribas
BNP,
,
Spain’s Banco Santander
SAN,
,
Italy’s Intesa Sanpaolo
ISP,

and the Netherlands’ ING
INGA,
,
thanks to the rise in bond yields. France’s 10-year yield
TMBMKFR-10Y,

that has been negative for nearly two years could reach zero by the end of the year. Since just before the U.S. election, on Oct. 29, the sector has gained 71%.

So the question is whether this bounce is real or not. There have been other times when the sector has seen big upward moves, most notably in 2009, before reversing lower.

And there is a countervailing force. The rise in bond yields has drawn the ire of the European Central Bank, which unlike the U.S. Federal Reserve, feels the moves could impede the economic recovery. ECB President Christine Lagarde, Chief Economist Philip Lane and board member Isabel Schnabel all have expressed alarm at the rise.

The ECB meeting on Thursday gives Lagarde another opportunity to talk down the bond yield rise, if not announce action. Analysts say the central bank still has more than enough firepower under existing authority to pick up its bond purchase activity under the Pandemic Emergency Purchase Programme.

The current yield is around where the ECB has accelerated purchases in the past, notes Nick Kounis, head of financial markets research at Dutch bank ABN Amro. “We think a step up in the pace of net asset purchases is the first and most obvious point of call for the ECB,” he said.

So an active ECB could jeopardize the nascent recovery for eurozone’s bank stocks.

“They are cheap, the question is whether the style value will continue to get some grip and be helped by a cyclical recovery for European banks. A steeper curve would help but at a guess the ECB will step in this week to cap this,” said Sebastien Galy, senior macro strategist at Nordea Asset Management.

There is more to the eurozone bank story than bond yields. Dividend payments are virtually banned by the ECB through the end of September, but analysts are now raising expectations for payouts, according to data from Morgan Stanley.

And, as Galy mentioned, the valuation isn’t demanding. According to FactSet, eurozone banks are trading on 0.6 times book value. Compare that to the U.S., where the SPDR S&P Bank ETF
KBE,