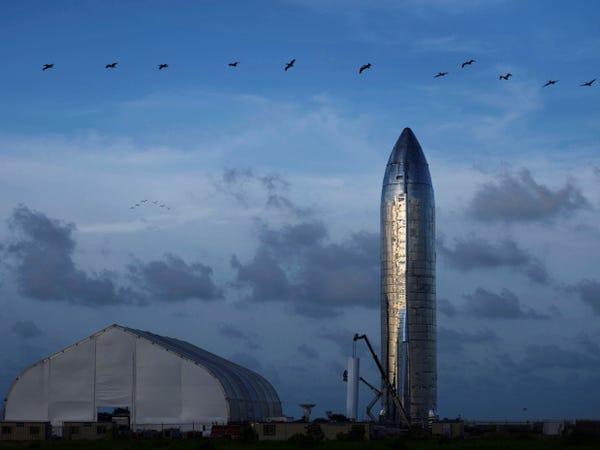 This week, SpaceX may take its big step forward yet in a quest to further revolutionize space travel.

Company founder Elon Musk tweeted on Monday night that a prototype of SpaceX’s enormous Starship spacecraft — a fully reusable vehicle the company eventually wants to use to send humans to the moon and Mars — could see its first high-altitude test as soon as Tuesday.

The flight attempt to 15 kilometers (9.3 miles), follows a successful November 24 rocket-engine test firing of the Starship prototype, called SN8 or serial no. 8. The test also comes after a successful “hop” flight in August to roughly 150 meters (492 feet) using a previous prototype called SN5.

The Federal Aviation Administration issued an airspace closure notice for a rocket launch from the Boca Chica Village in southern Texas (where SpaceX is developing and testing Starship) for Tuesday from 8 a.m. CT through 6 p.m. CT. The FAA also issued similar notices for Wednesday and Thursday as backup options for SpaceX, should any glitch delay launch.

Both an airspace closure and a local road closures are required for launch, though. The Cameron County judge has issued Boca Chica road-closure notices for Tuesday and Wednesday, but not yet Thursday.

Musk: ‘Maybe 1/3 chance’ of a successful flight and landing

This test flight is a big step in seeing whether the 16-story spaceship design can withstand the rigors of greater altitudes, speeds, and maneuvers.

Musk said last week that a “lot of things need to go right” for SN8 to land intact, adding that he thinks there’s “maybe 1/3 chance” that it does.

However, should SN8 fail, SpaceX’s Starship factory is cranking out more prototypes, and SN9 could soon be ready to take its place for future testing.

Read more: SpaceX may spend billions to outsource Starlink satellite-dish production, an industry insider says — and could lose $2,000 on each one it sells

SpaceX’s Starship system is made up of two sections, the Super Heavy booster and the Starship rocket ship, which Musk claims will be able to carry 100 people to Mars at a time. The entire spacecraft stands at 120 meters (394 feet) tall.

In October, Musk said SpaceX has a “fighting chance” of sending an uncrewed Starship rocket to Mars in 2024, two years later than previously hoped.

“It’s quite possible that we could leverage Starship to go to some of these dead rocket bodies – other people’s rockets, of course — basically, pick up some of this junk in outer space,” she said.

But first SpaceX needs to show Starship can safely fly to orbit and back. To launch such test missions from Boca Chica, the company faces a new environmental analysis with the Federal Aviation Administration. Depending on the outcome of that process, SpaceX may see a delay to orbit from a few months to a few years.

This story has been updated with new information. It was originally published at 5:59 a.m. ET on November 27, 2020.

10 Reasons why the Framework Laptop is your dr...

Linda Tirado was blinded in one eye after bein...