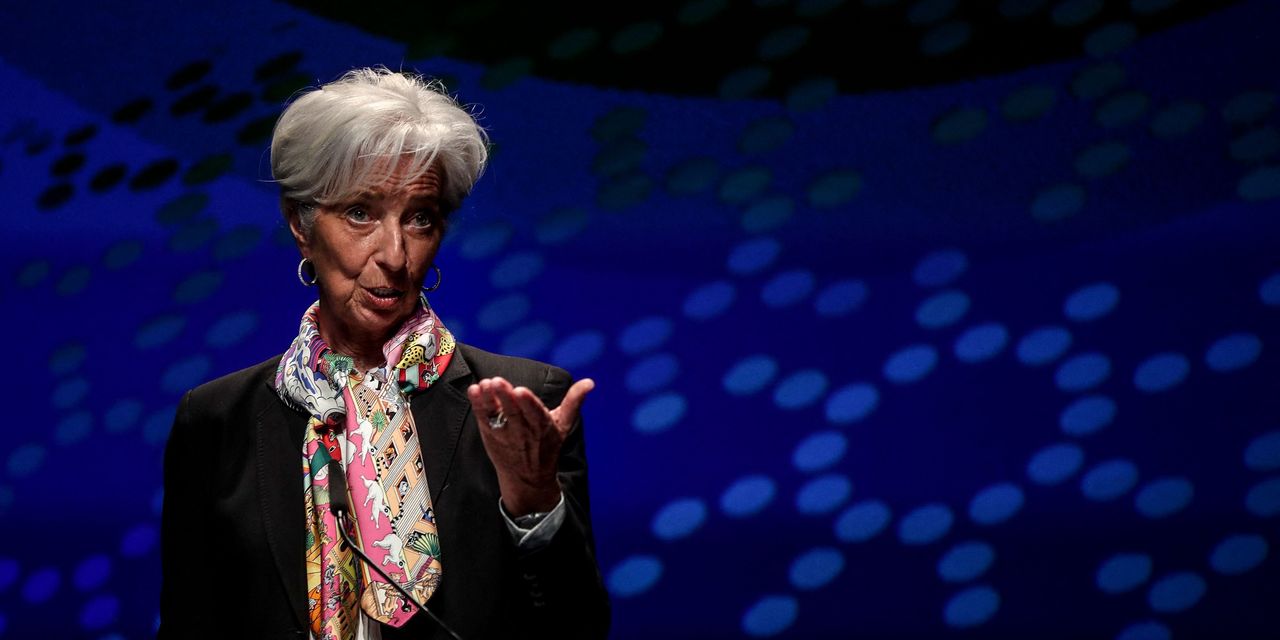 FRANKFURT—The European Central Bank upgraded its economic outlook for the eurozone but said it would keep its aggressive monetary stimulus in place, signaling a likely divergence with the Federal Reserve, which could move toward phasing out its emergency measures as early as next week.

At a news conference on Thursday, ECB President

said she expects a robust bounceback in economic activity across the continent as the pace of Covid-19 vaccinations picks up and stores and restaurants reopen.

She cautioned that the region’s economic recovery lags behind that of the U.S., however, with more than one European in seven still unemployed or on furlough from their job. U.S. inflation surged to 5% in May on an annual basis, the highest annual inflation rate in nearly 13 years, compared with only 2% in the eurozone.

While the U.S. economy may already have surpassed its pre-pandemic size, the eurozone isn’t expected to make up the ground lost to the pandemic until next year.

The ECB said in a statement that it would keep its key interest rate at minus 0.5% and continue to buy eurozone debt under an emergency €1.85 trillion bond-buying program, equivalent to $2.2 trillion, through at least March 2022. It said it would buy those bonds at a “significantly higher pace” than during the first months of this year, repeating a pledge made in March.

The move had been widely expected and created few ripples in financial markets. The yield on 10-year Italian debt slipped to 0.750% from 0.776% on Wednesday, while the yield on the Greek equivalent declined to 0.808% from 0.833%.

A personal, guided tour to the best scoops and stories every day in The Wall Street Journal.

Ms. Lagarde said ECB officials had not yet discussed scaling down their bond purchases, saying such considerations were premature. In contrast, Federal Reserve officials have recently signaled they are getting ready to think about paring central bank stimulus at a policy meeting on June 15-16.

Any divergence between the ECB and the Fed should help to hold down the euro against the dollar and support European businesses as they emerge from the crisis.

“Other central banks are constrained by the Fed,” said

former deputy governor of Ireland’s central bank. “If the ECB decides to tighten monetary policy before the Fed, for instance, the euro will immediately rise against the dollar, which hurts Europe’s exports.”

With the eurozone recovery gathering pace, however, some analysts said the ECB might be waiting too long to adjust its policy mix to better economic news.

“The longer the bank keeps the foot on the accelerator even after the economy has picked up speed, the more difficult it may be for the ECB to engineer a smooth exit later on,” said

Analysts said the ECB would likely need to shift course in the coming months and unveil plans to scale back its bond purchases to prevent the economy from overheating. That could happen after policy meetings in September or December, they said.

A sharp rise in commodity prices over the past year is stoking concerns among investors that inflation could rise more durably, which would push up market interest rates and trigger large shifts in global asset prices and capital flows.

However, the ECB will likely be wary of reducing its stimulus before it presents the results of a yearslong review of its monetary policy strategy, which is expected in the fall and could alter the bank’s inflation target, analysts said. If the ECB were to raise its inflation target to 2% from just below 2% following the review, for example, that would require additional stimulus.

“It’s easier for the ECB to follow than to lead” the Federal Reserve, said

an economist at Jefferies in London.