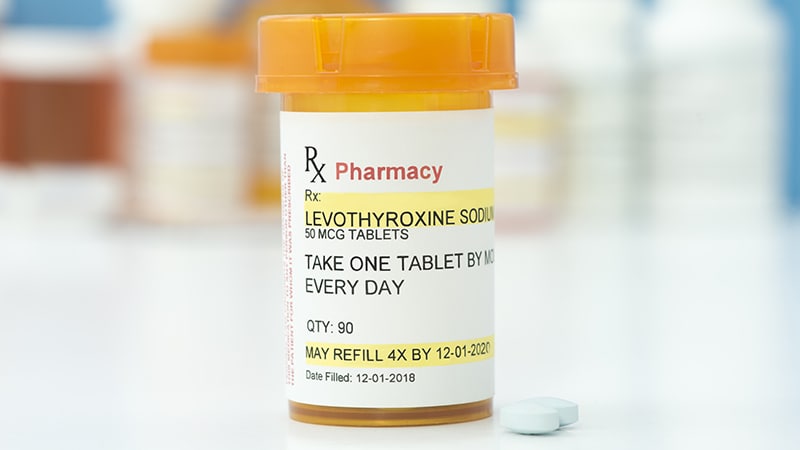 Older adults with isolated elevations in thyroid-stimulating hormone (TSH) who are treated with thyroid replacement therapy show an increased risk of death relative to the same patients who are untreated, adding to evidence that subclinical hypothyroidism in older age may be better left alone, according to new research.

“The findings are in-line with our hypothesis that isolated elevated TSH is due to a diverse number of underlying changes, some adaptive, which could therefore be rendered maladaptive with treatment,” senior author Jennifer Mammen, MD, PhD, told Medscape Medical News.

“Although the trends have been for very aggressive use of thyroid hormone especially in older women, I am hopeful that our work will help to temper this and allow more thoughtful evaluation and targeted use of thyroid hormone,” added Mammen, assistant professor at Johns Hopkins University in Baltimore, Maryland.

The study was accepted for presentation at ENDO 2020, which has now gone virtual, and was published in a special supplemental section of the Journal of the Endocrine Society.

Some randomized trials, including the TRUST trial, as reported by Medscape Medical News, have previously shown no benefit of levothyroxine after 1 year in patients age 65 years and older in treating symptoms.

First author of that trial, David J. Stott, MBChB, MD, notes that as this new study is observational, causality cannot be established, and therefore, “the jury remains out on whether treating subclinical hypothyroidism with levothyroxine affects mortality,” he told Medscape Medical News.

“What we do know is that treating subclinical hypothyroidism with levothyroxine does not make people feel any better — this conclusion is robust for TSH up to 10 mU/L,” said Stott, who is professor emeritus of geriatric medicine at the University of Glasgow, Scotland, UK.

“On this basis, clinicians should no longer be treating patients with mild subclinical hypothyroidism (TSH 4.6-10 mU/L),” he concluded.

Following Up on the TRUST Trial

Mammen and colleagues sought to evaluate the role of levothyroxine on mortality following publication of the TRUST trial.

They evaluated thyroid function status and exposure to thyroid hormone treatment in 1258 participants aged 65 or older in the Baltimore Longitudinal Study on Aging, a long-term observational study by the National Institute on Aging.

The participants were an average age of 78 years and 49.5% were women. All had at least one TSH and T4 measurement since 2003.

With an average follow-up of 9 years, there were 169 deaths over the study period.

After adjustment for factors including age, sex, walking index, self-rated health, body mass index, smoking, and a comorbidity score, the results showed that among those with a history of thyroid hormone treatment, the incident rate ratio (IRR) for mortality was increased by 40% year over year (IRR, 1.40).

“We found the highest mortality among those with consistently suppressed TSH, all of whom were on thyroid hormone in our study,” Mammen noted.

TSH Shift an Adaptation to Aging?

A key theory on the potential harm of treating subclinical hypothyroidism in older adults is that as people age TSH levels shift as part of an adaptation to the natural aging process to balance other changes. “Correcting” those levels with treatment could therefore prevent achievement of that balance, Mammen explained.

“The hypothesis is that if you have some pressure from aging that is somehow pushing the system in one direction, the thyroid axis tries to rebalance by going in the other direction,” she said.

Furthermore, there appears to be heterogeneity in older adults. Whereas some indeed may have subclinical hypothyroidism, others may only have isolated elevated TSH, and this could really just be a mild compensatory effect in aging.

She noted that American Thyroid Association guidelines have therefore suggested that target reference ranges could vary in older adults.

So she urged clinicians to “be conservative in their approach to an isolated elevated TSH in older adults.”

“Check it more than once before starting thyroid hormone. Maybe check the thyroid hormone level directly to see if the individual might actually have a high-normal level which is not consistent with hypothyroidism,” Mammen said.

The suggestion of adjusted reference ranges with older age was echoed in a JAMA editorial published in October 2019. Such a move could lead to “a data-driven reduction in unnecessary levothyroxine prescriptions,” wrote the author, Anne R. Cappola, MD, of the University of Pennsylvania, in Philadelphia.

The authors have reported no relevant financial relationships. Stott has received research funding from the European Union.