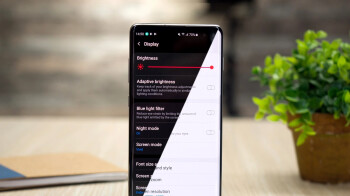 It’s become a staple in best phone battery life tip roundups – use Dark Mode for the interface if available – as OLED displays consume the most energy when showing white, and none when showing black, as the diodes are completely turned off then.

Enter a study that tried to determine exactly how much battery would you save by running dark backgrounds and wallpapers on your phone with OLED display (most phones nowadays).

How much battery does Dark Mode save?

Well, the team found out that when the display works at average brightness levels, 30%-50%, the dark mode power consumption savings in the respective apps was rather negligible at up to 9% reduction in power draw.

Put the phone in automatic brightness, however, and go outside on a sunny day, and the screen brightness gets an immediate boost to the highest amount possible. Needless to say, in that scenario the power savings from using the phones in dark mode where significantly higher, to the tune of the whopping 47% on average.

Yep, that means that on the beach your phone may last almost twice as long in dark mode than if you don’t use this setting. This result is perhaps not surprising for those who know that an OLED display’s power consumption is not linear, and showing white on full brightness is the worst of worst scenarios for the level of its power draw that will kill your battery in no time.

According to the research team, their tailor-made tools are behind the accurate OLED display power consumption depiction both in and out of Dark Mode:

Tests done in the past to compare the effects of light mode with dark mode on battery life have treated the phone as a black box, lumping in OLED display with the phone’s other gazillion components. Our tool can accurately isolate the portion of battery drain by the OLED display…

A major challenge in designing both tools is to develop an accurate and robust OLED display power model. We experimentally show that linear-regression-based OLED power models developed in the past decade cannot capture the unique behavior of OLED display hardware in modern smartphones which have a large color space and propose a new piecewise power model that achieves much better modeling accuracy than the prior-art by applying linear regression in each small regions of the vast color space. Using the two tools, we performed to our knowledge the first power saving measurement of the emerging dark mode for a set of popular Google Android apps.

The researchers are promising to open source their enhanced Android Battery+ tool to better suit the needs for measuring the unique power draw realities of modern OLED displays, and will try to integrate it in AOSP going forward