DeSantis to fly flags at half-staff for Rush Limbaugh 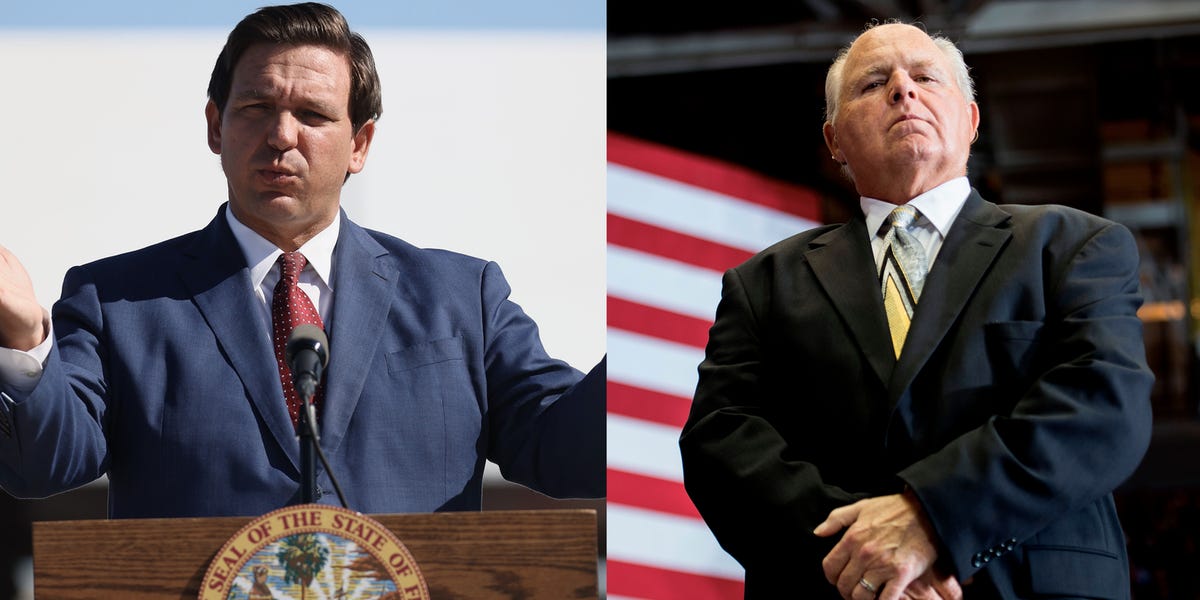 Florida Gov. Ron DeSantis, a Republican and fierce critic of President Joe Biden, announced Friday that flags in the state would be flown at half-staff to honor late radio personality Rush Limbaugh.

“What we do when there’s things of this magnitude, once the date of interment for Rush is announced, we’re going to be lowering the flags to half-staff,” DeSantis said at a Friday political rally in West Palm Beach, The Tampa Bay Times reported.

As the Times noted, DeSantis had recently flown flags at half-staff when Supreme Court Justice Ruth Bader Ginsburg died in September and again in January when five people were killed as a result of the insurrection at the US Capitol.

According to state protocol, flags are lowered on holidays honoring veterans, if a present or former governor of Florida dies, if a member of the military from Florida dies while serving on active duty, if a prominent present or former state official dies, or if a law enforcement officer or firefighter is killed in the line of duty, The Tampa Bay Times reported.

A Florida resident may request that flags be lowered to honor someone else, but it’s not clear whether that happened in this instance, according to the report. The office of the Florida governor did not immediately return Insider’s request for comment Saturday.

The decision was quickly condemned by Florida Democrats.

“Lowering the flag of the United States is a high honor reserved for those who have honorably and bravely served our state and our nation,” said State Sen. Gary Farmer in a statement. “Unfortunately, Gov. DeSantis has now transformed this distinction into a partisan political tool to salute a man who served no other interests than his own and did his best to deeply divide a country along political fault lines.”

Florida Rep. Debbie Wasserman Shultz, the former head of the Democratic National Committee, called the decision an “an embarrassment to Florida,” and said, “Limbaugh weaponized his platform to spread racism, xenophobia and homophobia across the nation.”

“Florida is better than this,” said Florida Rep. Ted Deutch who called the move “disgusting” and “embarrassing” to Florida.

Limbaugh died Wednesday at the age of 70. In February 2020, Limbaugh announced he’d been diagnosed the month prior with advanced-stage lung cancer.

The late talk show host was last year awarded the President al Medal of Freedom by President Donald Trump at his final state of the union address, which likewise drew widespread backlash from figures on the left.

Limbaugh was known for his brash commentary and was known as a key figure in developing key tenants of the modern Republican Party and its far-right stances and attitudes. But Limbaugh was controversial and widely disliked by Democrats for his airing of sexist, racist, and homophobic comments during his radio show.

'It's great to see America re-engage'...