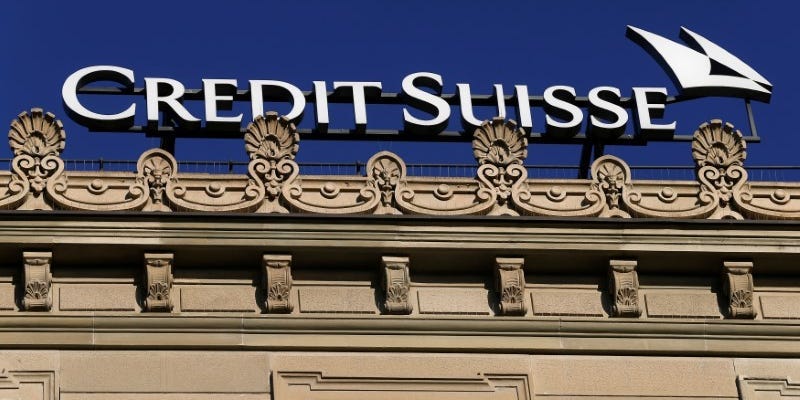 The bank’s net profit came in at 546 million francs in the July to September period, lower than the 680.7 million francs ($747 million) analysts polled by Bloomberg estimated.

But Credit Suisse said the large drop was because in the same period last year, it received a 327 million franc ($358 million) boost from selling its InvestLab fund platform to Allfunds group.

Credit Suisse shares fell by as much as 4.7% on Zurich’s SIX exchange.

Here are the key numbers:

Read More: Here’s the 6 killer pieces of advice for trading European stocks after the US election, from investment giants UBS and Barclays

UBS, the bank’s bigger rival in the region, fared much better by posting a 99% jump in quarterly profit to $2.1 billion earlier this week.

The international wealth management business, its main weakness this quarter, saw a 10% drop in revenue to 2.5 billion francs ($2.7 billion) from a year ago.

The Swiss franc rose by nearly 3% against the dollar in the third quarter of the year, hitting its highest in over five years, which would mean any non-Swiss investors would have seen their income diminish in local-currency terms.

Unlike many European lenders, Credit Suisse said it would pay the second half of its 2019 dividend to shareholders and plans a 5% annual dividend growth for next year. It also said it would restart its share buyback plan to boost shareholder returns next year by spending up to 1.5 billion francs ($1.6 billion).

The bank said it expects the COVID-19 environment to “continue to result in elevated levels of transactional and trading activity, across both our wealth management and investment banking businesses, as our clients respond to the macroeconomic uncertainties.”

Read More: 7 stocks to buy – in addition to the FAANMGs – for a second wave of COVID-19, according to a Wall Street expert

This is how America gets its vaccines...