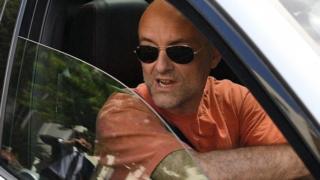 The PM’s top aide Dominic Cummings says he did the “right thing” by travelling 260 miles to be near relatives during the coranavirus lockdown – adding that he did not care what it looked like.

Mr Cummings is facing calls to quit over the journey, which he made when his wife had Covid-19 symptoms.

Downing Street said he wanted to ensure he had childcare if he got symptoms.

But Labour said that was not a satisfactory answer and many people would be angry at his actions.

Mr Cummings told reporters he “behaved reasonably and legally” when asked about the trip from London to Durham.

Asked whether it looked good, he said: “Who cares about good looks? It’s a question of doing the right thing. It’s not about what you guys think.”

Durham Police said they attended a property in County Durham, after the Guardian and the Daily Mirror newspapers first reported Mr Cummings had been seen near his parents’ home in early April.

Durham’s police and crime commissioner Steve White said it had been “most unwise” for Mr Cummings to make the journey, “given the whole ethos” of the government’s guidance.

In a statement, Downing Street said: “Owing to his wife being infected with suspected coronavirus and the high likelihood that he would himself become unwell, it was essential for Dominic Cummings to ensure his young child could be properly cared for.

“His sister and nieces had volunteered to help so he went to a house near to but separate from his extended family in case their help was needed. His sister shopped for the family and left everything outside.

“At no stage was he or his family spoken to by the police about this matter, as is being reported.

“His actions were in line with coronavirus guidelines.”

The Scottish National Party has called for Mr Cummings to quit – and has written to Sir Mark Sedwill, the head of the civil service, calling for a swift investigation into the incident.

Labour has stopped short of calling for Mr Cummings’ resignation, saying the government had questions to answer at its daily press conference at 16:00 BST.

A Labour spokesman said: “The lockdown rules were very clear: if you or anyone in your household was suspected of having Covid-19 you must immediately self-isolate and not leave the house,” said a Labour spokesman.

“However, the prime minister’s chief adviser appears to believe that it is one rule for him and another for the British people.

“This will cause understandable anger for the millions of people who have sacrificed so much during this crisis.”

Mr Cummings masterminded the 2016 Vote Leave campaign to get Britain out of the European Union, and was made Boris Johnson’s top political adviser, when he entered Downing Street last year.

He has attended meetings of the Scientific Advisory Group for Emergencies (Sage) – the scientific body which gives independent advice that shapes the government’s coronavirus response.

Cabinet ministers have rallied round Mr Cummings on social media, with Cabinet Office Minister Michael Gove tweeting: “Caring for your wife and child is not a crime.”

Dave Penman, general secretary of the FDA, the union that represents senior civil servants, said the prime minister was responsible for the actions of his chief aide, and called for Mr Johnson to explain reports that Mr Cummings broke lockdown rules.

Dr Calderwood resigned in April after making two trips to her second home during the coronavirus lockdown.

While Prof Ferguson quit as a government adviser on coronavirus after it was reported that a woman he was said to be in a relationship with visited his home in lockdown.

On 30 March, it was reported that Mr Cummings, the former Vote Leave chief who was the architect of the PM’s Brexit strategy, had developed symptoms of the coronavirus and was self-isolating at home.

His wife, journalist Mary Wakefield, described in the Spectator magazine how he collapsed and was bed-ridden for 10 days.

Durham Police confirmed officers had spoken to the owners of an address after its officers were made aware on 31 March of reports a person had travelled there from London.

A spokesman said that owners of the address confirmed the individual “was present and self-isolating in part of the house”, and officers “explained to the family the guidelines around self-isolation and reiterated the appropriate advice around essential travel”.

Government advice on 31 March was for the public to stay at home and only leave for clearly defined reasons, including to exercise, essential shopping or for medical needs.

At the time – and as remains the case – those with symptoms of coronavirus were told to self-isolate at home and not leave even for essential supplies, if possible, for seven days.

It was and also remains not permitted to leave your house to visit friends and family in their home, while government advice for those aged 70 and over continues to be that they should minimise contact with others outside their household.