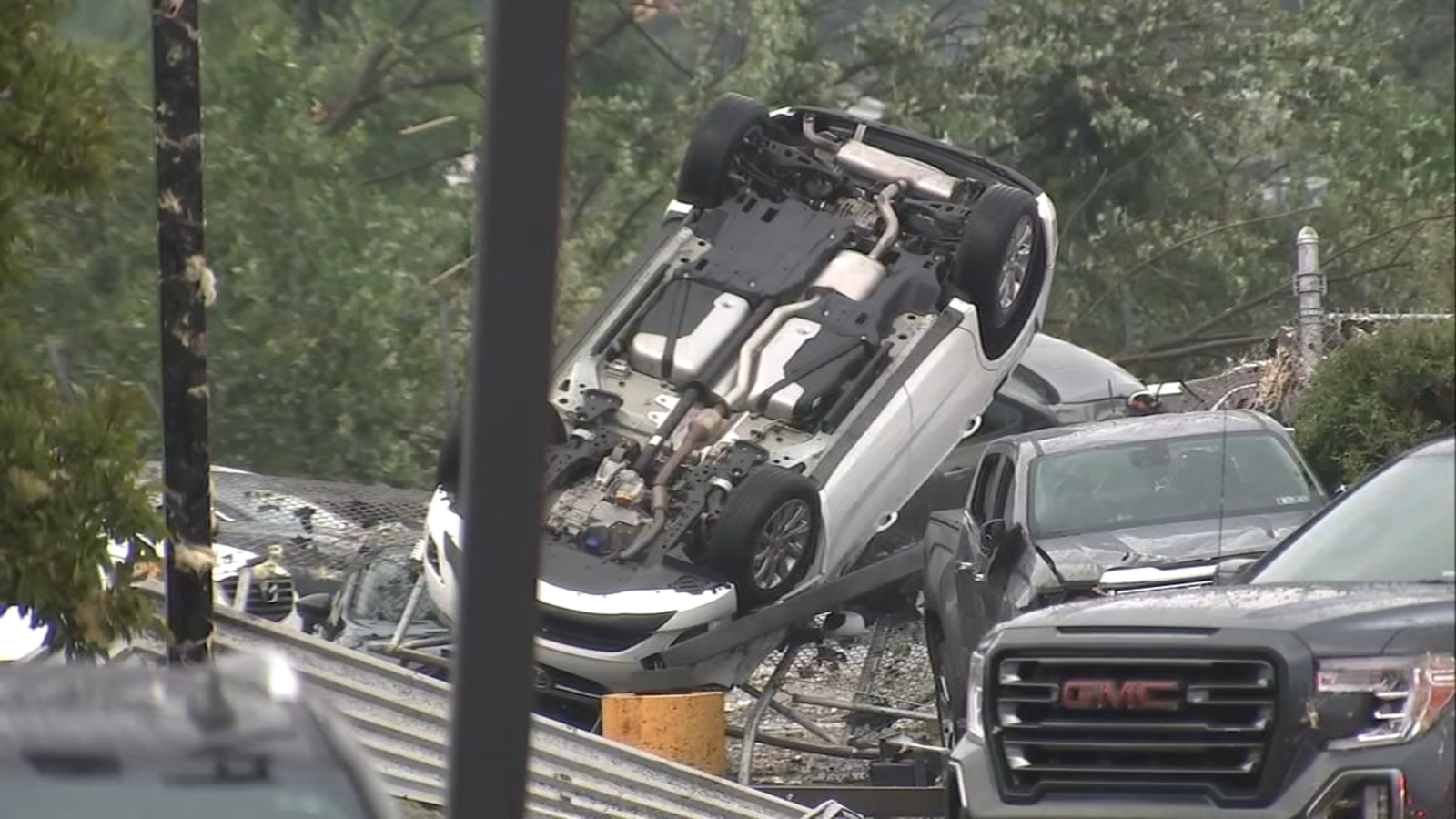 BENSALEM, Pennsylvania (WPVI) — A line of severe weather left behind a path of destruction after at least one tornado touched down in the Philadelphia region Thursday night.

Fred Harran, the director of public safety for the Bensalem Township Police Department, said the tornado touched down along the Old Lincoln Highway corridor near the Neshaminy Mall. A car dealership was right in the storm’s path.

“We heard this loud bang in the middle of the parking lot and it blew right through the windows. It blew through everything,” said Victor Rivera.?s=20

Rivera was inside the Faulkner Mazda dealership in Trevose on the 4400 block of Street Road when the tornado touched down.

Cars were seen flipped in parking lots and a roofing structure was torn off the property.

“This was a devastating tornado that came through as a lot of structural damage in this area,” said Harran.

The National Weather Service has not yet determined the strength of the twister.

“My mom got under the table and I just kind of held her in my arms,” Rivera said. “I watched the glass implode and the ceiling kind of caved in from there.”

The windows of the nearby Volvo dealership were also blown out, and the part of the roof lifted off the Buick building.

First responders aided employees and customers on-site while fire crews secured the buildings and PECO crews rushed to turn off the gas.

SHARE: Have images and videos of storm damage? You can share it with Action News by clicking HERE.

“Just look at a bomb went off, I mean it’s gone,” said Harran of the damage.

Behind the dealerships, parts of the Penn Valley Mobile Home Park were nearly leveled. The storm uprooted trees and brought down power lines near David Paniagua’s family mobile home.

There are multiple road closures in effect until further notice. The current list includes a complete closure of Street Road from Richlieu Road to Trevose Road; Old Lincoln Highway from Route 1 to Bristol Road; The area of Linconia Park has also been closed to all traffic.

The Red Cross has a team of disaster workers gathered at the Neshaminy Mall in Bensalem Township, Bucks County, working with government partners and affected residents to determine what their needs are after the damaging tornado.

SEE ALSO: Bucks County residents hunkered down during storm: ‘It sounded like a bomb went off’

Thirty minutes north, Matt Maximuck, who owns a 100-acre farm in Buckingham, said the storm sounded like a freight train.

“It blew the roof off my barn and as you can see, shattered the glass windows on my greenhouses. It was a mess,” said Maximuck.

In nearby Plumstead, a giant 50 to 60-foot tree came crashing down in a garage as a frightened homeowner sat nearby.

The National Weather Service says crews will be conducting several storm surveys across the region Friday.